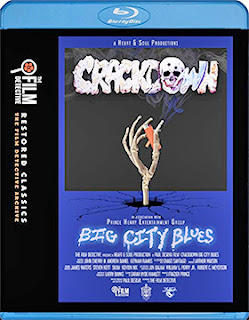 The history of filmmaking is replete with bizarre and strange tales of productions gone awry, or hijacked … or slipping off into the void.   Perhaps there is none stranger than writer/director Paul DeSilva’s 1990 New York City drug-fueled “docudrama” titled Crackdown Big City Blues.

Filmed with a mix of cinéma vérité, choreographed street violence and documentary-style messaging, Crackdown Big City Blues is a time capsule of the 1990s crack epidemic that ravaged New York City, especially the Black and Hispanic communities.   It was raw and ready to rumble!

As with many indie productions — both then and now — getting the film made was one thing, getting it distributed was yet another.   The Blaxploitation boom of the 1970s was past its prime, so it couldn’t be slotted into that mix for distribution … and its anti-drug message found few takers at the time.   The film was put up on the shelf and then suddenly in 1997 DeSilva dropped dead of a heart attack … Crackdown Big City Blues would be forgotten.

That is, until now.   The Film Detective has teamed up with Paul DeSilva’s life-long friend and former narcotics detective, Frazier Prince, to restore Crackdown Big City Blues from the original 35mm archived print for both Blu-ray and DVD distribution on Nov. 20.

The film is not only a trip down memory lane — a pre-9/11 time capsule of the gritty streets of New York City — but the film also features vintage performances from the likes of Rhonda Ross Kendrick (the daughter of Diana Ross and Berry Gordy), former Charger, Packers and Browns pro-football player of the early 1970s, Jim Hill and recording artist Stu “Large” Riley.