Joshua Tree 1951: A Portrait Of James Dean On DVD From Wolfe Video June 4 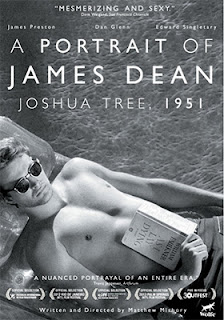 He starred in only three films, and yet he is a silver screen icon; a Hollywood legend.  He died at 24 (Sept. 30, 1955) and yet books, movies and more (art, legend, tales, etc.) have been devoted to his influence on generations that may even lack a cohesive understanding of what the young man was all about.

We are speaking of James Dean, the star of East of Eden, Rebel Without a Cause and Giant … and the subject of writer/director Matthew Mishory’s first feature film (after three noteworthy short films, including Delphinium: A Childhood Portrait of Derek Jarman).

The film in question, which is heading to DVD from Wolfe Video on June 4, is Joshua Tree, 1951: A Portrait of James Dean.   Using elements from the actor’s pre-New York TV and stage work and his college days at UCLA, Mishory has fashioned a sexually-charged tale about a brief moment in the future icon’s life prior to his flash of fame … and immortality.

James Preston plays the young actor in this stylized, dream-like — even surreal — glimpse into what life (and experimentation) might have been like for a 1950s college student and thespian.   We know from his biography that he had a torrid affair with Pier Angeli once he gained notoriety and fame … and we also know that he had an exceptionally “close” relationship with his college roommate and future screenwriter William Bast (based on two books written by Bast). 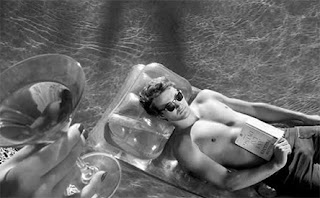 From these sexual threads, Mishory has sculpted a “might-have-been” story that, quite frankly, it is one that James Dean would not have objected to.  The relationships, the sexual encounters and experimentation all seem to fit … and in an odd way the story spun here (“roommate” without a name, etc.) is neither gay, nor bi-sexual, but just a “what if” moment lost to time.

Included as a bonus feature is the aforementioned short film from Matthew Mishory, Delphinium: A Childhood Portrait of Derek Jarman.

It's A Disaster On DVD From Oscilloscope Laboratories June 4 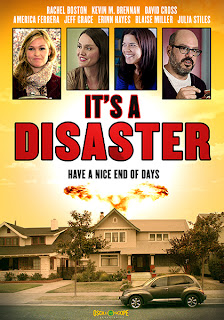 Dang!  Timing is everything.   You’re at the sort-of-regular Sunday “couples” brunch with your friends, ready to have a good time; get into a bitch session; drink, eat and more, when suddenly the world ends.  Son of a gun, if you could time such an event, wouldn’t having sex on the beach with a super model be a better option?

No matter, that’s the premise of writer/director Todd Berger’s comedy, It’s a Disaster, announced this week for a DVD and Blu-ray launch by Oscilloscope Laboratories on June 4.

Nearly a full year of film festival competitions (with Best Feature wins at the BendFilm Festival, Edmonton International Film Festival and New Orleans Film Festival) led up to a limited theatrical showcase on Apr. 12, so technically speaking the ARR works outs to 53 days.

This is a tightrope act.  When you start spinning acts of terror into the premise of a comedy, you have to be careful not to cross certain lines … it has to be a plot element and not the subject of the story.   It’s the “thing” that motivates, or in this case, “constrains” the characters, not the act itself.   It’s just the MacGuffin.

With that out of the way, it is OK to laugh out loud with It’s a Disaster, an eight-person ensemble piece (think: stage play) that includes the likes of Julia Stiles, David Cross, Jeff Grace and America Ferrera in the mix.

As four distinct couples, they’ve all assemble at the Mandrake’s house (Erinn Hayes and Blaise Miller) for their brunch, but just when things get rolling the cable, the phone and then the lights go out.

Pretty soon the goofy neighbor comes knocking with news that a “dirty bomb” has been set off and a deadly gas cloud is heading their way.   Their only option is to lock themselves in and hope for the best.

Of course you can see where that is going and Todd Berger wastes no time in lighting the “nails on the chalkboard” fuse.   A brunch with a beginning and ending (even if it runs a little long) is tolerable, but a brunch that goes on and on and on until the world comes to the end is … HELL!

Bonus features include commentary from writer/director Todd Berger, who is joined by cast members David Cross, Kevin Brennan and Jeff Grace, plus there is a behind-the-scenes featurette titled “Tour With Todd” and a Comic-Con 2012 panel discussion.

Posted by DVD & Blu-ray Release Report at 5:34 PM No comments:

Email ThisBlogThis!Share to TwitterShare to FacebookShare to Pinterest
Labels: DVD and Blu-ray Release Report, It's A Disaster On DVD From Oscilloscope Laboratories June 4 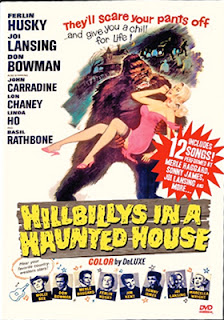 VCI Entertainment heads to the hills on June 11 with a trio of film vault treasures (actually four films in all) making their way to DVD with a downhome, backwoods theme.

Way, way back in the 1960s the late Ferlin Husky was a top country singer with such hits as “Gone,” “Wings of a Dove” “Once” and “Just For You.”

He spun that success into a brief stint with the movies, turning out two musical comedies as the legendary crooner, “Woody Wetherby” — VCI has them both: The Las Vegas Hillbillys (1966, with Jayne Mansfield and Mamie Van Doren) and Hillbillys in a Haunted House (1967, with a cast that includes Basil Rathbone, Lon Chaney Jr. and John Carradine). 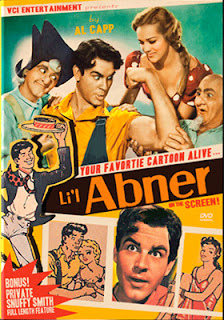 Rounding out the June 11 DVD release trio is the remastered double feature that toplines director Albert S. Rogell’s 1940 film adaptation of the Al Capp comic strip, Li’l Abner, with Jeff York (aka: Granville Owen) as Li’l Abner, Martha O'Driscoll as Daisy Mae and none other than the old Stone Face himself, Buster Keaton, as Lonesome Polecat.

All three SKUs in this promotion carry an SRP of just $9.98 each!

Posted by DVD & Blu-ray Release Report at 3:24 PM No comments:

The Rolling Stones: Crossfire Hurricane From Eagle Rock Entertainment On May 21 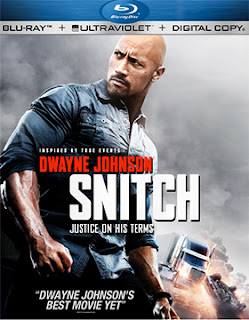 Lionsgate Home Entertainment has targeted June 11 as the street date for the Summit Entertainment film production of former stuntman-turned-director Ric Roman Waugh’s Snitch.   Dwayne “The Rock” Johnson stars in this action thriller, which pulled in $41.8 million in its domestic theatrical run.

The ARR works out to 109 days for the planned release of both DVD and Blu-ray/DVD Combo Pack (with UltraViolet) editions.

As to bonus features, filmmaker Ric Roman Waugh (Felon, In the Shadows) will be providing commentary (he is joined by editor Jonathan Chibnall), plus there are deleted scenes and a multi-part making-of featurette titled “Privileged Information: The Making of Snitch.”

Posted by DVD & Blu-ray Release Report at 2:38 PM No comments: