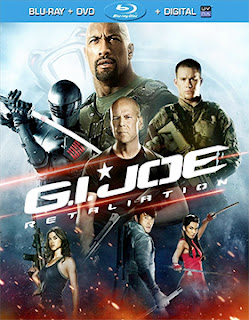 $121.9 million is the box office haul for this sequel to G.I. Joe: The Rise of Cobra … the ARR for this three-SKU package works out to 123 days.

Betrayal, a president with a hidden agenda and a worldwide nuclear showdown are just the starters for this Dwayne Johnson/Bruce Willis good guys versus (very) bad guys action flick.   Fans will not be disappointed, especially with Adrianne Palicki as the kick-butt eye-candy member of the group — who can more than take care of herself — as well as some unexpected allies joining The Joes to put things right. 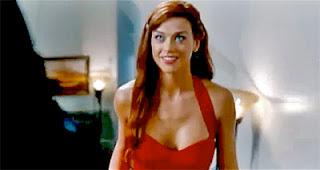 As to bonus goodies, they are limited to the Blu-ray SKUs and include commentary by director Jon M. Chu and producer Lorenzo di Bonaventura (Transformers: Dark of the Moon, G.I. Joe: The Rise of Cobra, etc.), plus deleted scenes and no less than eight production featurettes, including one titled “The Lone Soldiers” and a second titled “Mission Briefing.” 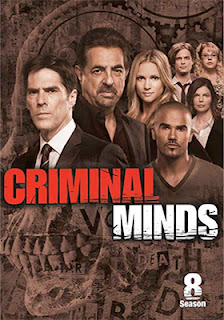 On the TV-on-DVD release front the focus has now turned to the post-Labor Day period for the next round of fan-favorites to make their way to the home entertainment market place.

On Sept. 3 the six-disc DVD release of Criminal Minds: The Complete Eighth Season will street.  The following week, Sept. 10, look for Tom Selleck to return in the six-disc selection of Blue Bloods: The Third Season.

Oh yes, Dora and her sidekick Boots will ready for action on Sept. 10 in the DVD debut of Dora the Explorer: Dora's Great Roller Skate Adventure.

Posted by DVD & Blu-ray Release Report at 8:50 AM No comments: 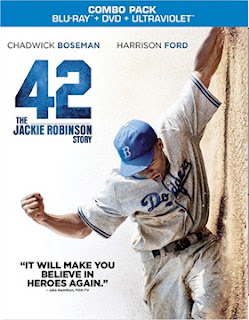 Warner Home Video announced this past week that writer/director Brian Helgeland’s Jackie Robinson biopic, 42, will be available to own as either a Blu-ray/DVD Combo Pack or as a stand-alone DVD SKU on July 16 (both editions include UltraViolet).

The ARR is a quick-to-market 95 days (timed to take advantage of the media hype surrounding this year’s All Star Game … which is also on July 16).   Ticket sales at the local multiplex were a very solid $92.9 — an exceptional number for a sports biopic.

Helgeland, who won the Oscar for his riveting (and attention to detail) script for L.A. Confidential in 1998 and was also nominated for his screenplay adaptation of Mystic River in 2003, is likely to see his third Oscar nomination this year.

He does play a little fast and loose with some of the actual historical events (for dramatic purposes), but his script and resulting film gets to the core of the story about Jackie Robinson and Branch Rickey breaking the baseball color barrier in 1947.

His screenplay focuses in on the immediate post-war period of 1946 and 1947, when Branch Rickey of the Brooklyn Dodgers went shopping for the individual with both the skills and the emotional maturity to bring black baseball players into the major leagues.  There were plenty of candidates in the “parallel” Negro Leagues to choose from in terms of ability, but Rickey correctly surmised that the racial taunts and bigotry of the day would be the real test for any black player stepping into the national spotlight.

Jackie Robinson, Army officer during World War II, college-educated and a four-sport athlete was the man that Rickey ultimately felt had the emotional skills to cope with what would be thrust upon him.   42 is that story.

To make this work, Helgeland needed two things.  First, everything on the screen needed to feel authentic — Ebbets Field needed to be Ebbets Field of 1947.   All of the uniforms needed to “feel” right for the period.   The CGI, costuming and set decoration are all outstanding … time machine sort of stuff.

Second, the pivotal characters of this “passion play” had to hit all of the right notes.   Chadwick Boseman as Jackie Robinson is superb, with Harrison Ford the perfect counterpoint as Branch Rickey the showman to Robinson’s business-like demeanor.

Helgeland also picks a couple of key events to showcase in this well-constructed story.  The Philly manager, Ben Chapman (played by Alan Tudyk), did more to advance race relations as a bigot of gigantic proportions (actual events early in the 1947 season) with his unrelenting sting of racial slurs than all of the well-meaning intellectuals of the period.   In one series he managed to unite the Dodger team around Robinson … no human being, black or white, deserved to be subjected to such vile insults they reasoned.

The other nice touch is the Pee Wee Reese (played by Lucas Black) moment (also an actual event, but there is some historical debate as to whether this took place in 1947 or actually in 1948).  In any case, legend has it that Cincinnati fans were taunting Robinson without mercy (pick a word, they said it), when suddenly Reese walked over to Robinson’s position at first base and put his arm around him … sort of a F*** You moment.

As to bonus features, the DVD includes the featurette titled “Stepping Into History,” while the Blu-ray SKU includes that one, plus two more — “Full-Contact Baseball” and “The Legacy of the Number 42.” 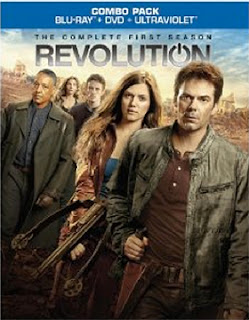 In other release news from Warner Home Video this week fans will find many of their favorite TV and cable series being released during the month of September.

The following street-date Tuesday, Sept. 10, marks the arrival of Supernatural: The Complete Eighth Season (both Blu-ray and DVD set) and a Blu-ray/DVD Combo Pack edition of Big Bang Theory: The Complete Sixth Season.

Sept. 17 is the street date for Arrow: The Complete First Season — on DVD and Blu-ray.

Also of note, Friday the 13th of September will be the release date for the 12-film Blu-ray collection of Friday the 13th: The Complete Collection (ten Blu-ray discs with a bonus DVD).

Posted by DVD & Blu-ray Release Report at 8:38 AM No comments: 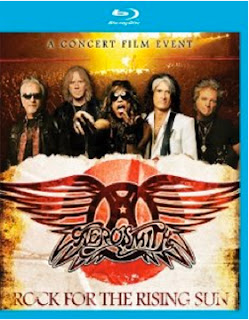 Filmmaker Casey Patrick Tebo’s concert film, Aerosmith: Rock for the Rising Sun, will be heading home on July 23 as both DVD and Blu-ray product offerings from Eagle Rock Entertainment.

Following the 2011 earthquake and tsunami that brought widespread devastation to Japan, Aerosmith elected to continue with their scheduled “Back on the Road” concert dates despite concerns about the viability of some of the venues.

Tebo not only documented the behind-the-scenes issues and daunting logistics related to staging such events during the aftermath of this nation-shaking event, but in the process captured the raw emotions of both the band members and their legions of fans who overcame all obstacles to jam the concerts.

16 complete live-concert numbers are included in this unique rock-your-socks off concert/documentary film.  Counted among the songs served up by Aerosmith are “Draw the Line,” “Livin’ on the Edge,” “Train Kept a Rollin’” and “Sweet Emotion.”

Bonus features include two bonus tracks, “Lick and a Promise” (recorded at the Hiroshima Green Garden Arena) and “One Way Street” (Tokyo Dome).

Also on the release calendar from Eagle Rock Entertainment in July are newly-prepared Blu-ray editions of Bee Gees: One Night Only and Scorpions: Moment of Glory … both street on July 30.

Email ThisBlogThis!Share to TwitterShare to FacebookShare to Pinterest
Labels: Aerosmith: Rock For The Rising Sun To Blu-ray And DVD From Eagle Rock Entertainment On July 23, DVD and Blu-ray Release Report 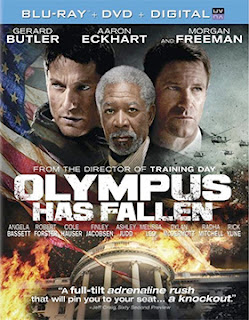 Sony Pictures Home Entertainment has selected Aug. 13 as the street date for DVD and Blu-ray (with UltraViolet) editions of director Antoine Fuqua’s Olympus Has Fallen.   The ARR comes in at 144 days and the box office take was an impressive $98.1 million.

Brilliant set design and seamless CGI work is undermined somewhat by plot elements that make it more difficult for a three-year old to get through security at your local airport than it is for heavily armed men to take over the White House and make the president of the United States their hostage.

That little bit of silliness aside, Olympus Has Fallen is a solid summer action flick that arrives in the home entertainment market place with four featurettes and outtakes as bonus features. 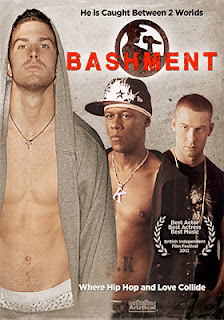 Ariztical Entertainment has captured the domestic home entertainment distribution rights to director Rikki Beadle Blair’s film adaption of his own critically-praised stage play, Bashment.   Aug. 20 has been designated as the DVD release date.

Using many of the cast members from the original award-winning play, this British filmmaker takes a no-holds-barred look at London’s underground music culture that can be both racist and extremely violent, especially for the subset of gay rap/reggae artists who are challenged not only by society in general, but by their not so enlightened contemporaries.

Into to this mix comes J.J. (Joel Dommett — The Edge of Love, Signs of Life, Skins, etc.), a gay white artist with a taste for the Ragga-Hip-Hop culture.   He clearly doesn’t belong and soon finds himself and his friend, Orlando (Marcus Kai), the targets of a particularly brutal collection of thugs who call themselves the Illford Illmaniacs.

The sweet and innocent Orlando is confronted and beaten into a comatose state and, to J.J., what should have been an open-and-shut case of attempted murder before the courts turns out to be nothing more than a slap on the wrists and some minor jail time for the thugs.

With their return to society imminent, J.J. must examine more closely the culture that has claimed him and be prepared to do battle with those who detest him for both who he is … and what he is not! 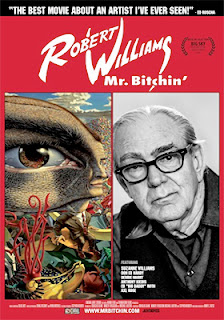 Documentary filmmaker Mary Reese took an intimate look at the life and times of cult painter, publisher and cartoonist Robert Williams and came up with a fascinating film “portrait” of the man and his art in the documentary titled Robert Williams Mr. Bitchin' … due out on DVD from Cinema Libre on July 30.

Williams could draw anything from an early age.   The 1960s car culture of Southern California fascinated him … so New Mexico high school dropout came west and became something of a legend over the years with his unique blend of cartoon-like illustrations and vibrant paintings … books, rock album covers and a following of collectors eager to adorn their walls with his “visions” are fully explored in this one-of-a-kind documentary.

Bonus features include an art gallery of his works.