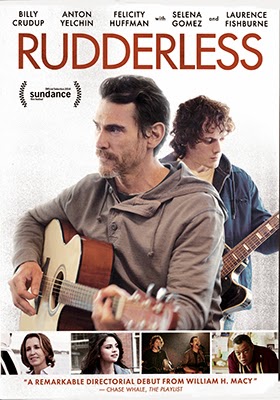 This lovely little film arrives in the home entertainment market place after working the film festival circuit and then moving to a very limited post-Labor Day theatrical showcase run.   The ARR is 95 days and ticket sales currently stand at $58,293.

Every year there are a few of these beauties that are best described as actor’s actor films … a small budget, a terrific script and a “named” actor taking on the role for the love of the process.   Here it is Billy Crudup, who has scored in such films as Almost Famous, The Good Shepherd and The Hi-Lo Country, who gets a script and a character that actor’s would kill for.

He plays Sam, a man whose life has come undone after the tragic death of his son Josh (played by Miles Heizer).    In the two years that has passed since that fateful day he has pissed away a career, become estranged from his wife Emily (Felicity Huffman) and now spends his time on a boat (anchored) drunk or getting drunk.   The day his son died he also died. 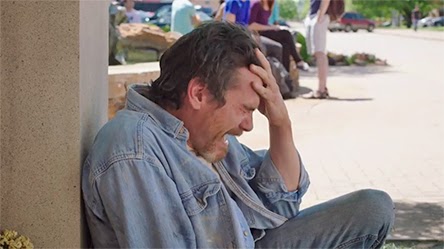 Billy Crudup delivers this lost life angst in spades … it is a killer performance.   But he’s not alone here as events unfold in a serendipitous way that finds Sam in possession of the music that his son has written.   Since we know Crudup has the chops to deliver a song (he was, after all, Russell Hammond in Almost Famous) — and spends most of his time drunk or getting drunk — it comes as no surprise that he’d sing one or two at an open mic night at the local watering hole (Trill Tavern run by Macey). 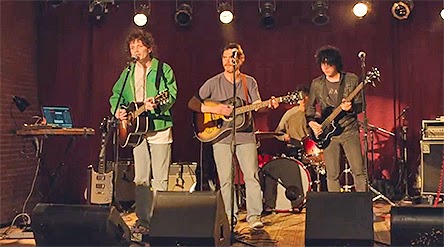 It is here that he meets Quentin (Anton Yelchin — perhaps best known to audiences as the new Pavel Chekov in the rebooted Star Trek series), who absolutely loves the music.   Before you know it they form a band and begin performing Josh’s music.   And shock of shocks, Anton Yelchin delivers a performance that matches Crudup’s note for note.

Rudderless, a film that needs to be seen in the home entertainment market place this January ... and not lost in the clutter and noise of the post-Christmas rush of new product releases.   It is a film that is blessed with strong performances, a haunting script ‑ that covers the whole range of emotions — and a soundtrack that can stand on its own (Eef Barzelay of Clem Snide, Brit-rocker Simon Steadman, Charlton Pettus and Ben Limpic all contribute music here).

Bonus features include the featurette titled “Hear This Song,” deleted scenes and the Selena Gomez/Ben Kweller music video, “Hold On.”

Posted by DVD & Blu-ray Release Report at 6:26 AM No comments: 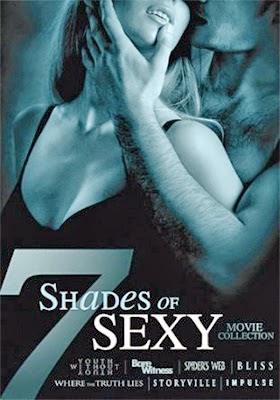 Mill Creek Entertainment announced this past week a 21-strong selection of new DVD product offerings that will arrive in two waves during the month of February.

Rounding out the films in 7 Shades of Sexy are Impulse, Youth Without Youth (2007 with Tim Roth and Alexandra Maria Lara) and Where the Truth Lies (2005, Kevin Bacon). 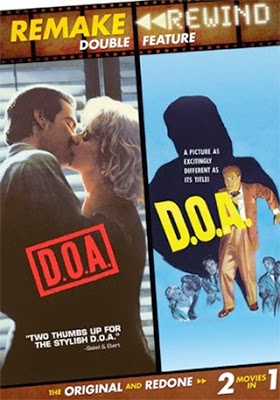 Also on Feb. 3 and priced at just $9.98 each are four double-features arriving under the “Remake Rewind Double Feature” promotional banner.   The original D.O.A. from 1950, starring Edmond O'Brien, Pamela Britton and Beverly Garland, is billed with the 1988 remake of D.O.A. starring Dennis Quaid and Meg Ryan.

Rounding out the Feb. 3 selections are Roxanne, starring Steve Martin and Daryl Hannah, Man of the Year (starring Tommy Lee Jones), a double-disc presentation of Maude: The Complete First Season and the DVD debut of Canterbury's Law: The Complete Series starring Julianna Margulies as defense attorney Elizabeth Canterbury — all six episodes of this short-run series are featured here.

Two weeks later — Jan. 17 — Mill Creek Entertainment is back with the next wave of new DVD selections.   This group is a kidvid bonanza that features eight “Retro TV Toons” SKUs and four Baby First presentations. 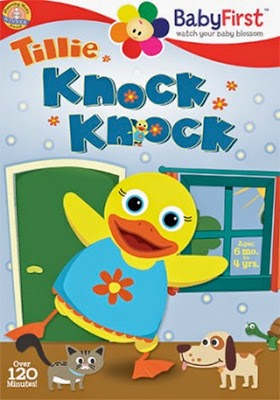 Arriving under the “Retro TV Toons” promotional banner are selections from such animated series as Dungeons & Dragons, The H.E.A.T. is On!, Godzilla: The Animated Series, He-Man and the Masters of the Universe,  Jumanji - The Animated Series, Where on Earth is Carman Sandiego, Wish Kid - The Complete Series and a double-disc helping of Action Man the Complete Series.

Posted by DVD & Blu-ray Release Report at 6:20 AM No comments: 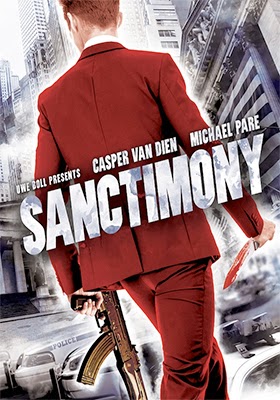 Olive Films revealed this past week that cult filmmaker Uwe Boll will be front and center on Jan. 27 with a pair of cinematic guilty pleasures.

First up is Sanctimony, which stars Caspar Van Dien as a Wall Street financial whiz who just can’t get enough of an adrenaline rush from the high pressure trading action so he becomes a serial killer.

After 15 kills and being dubbed the “Monkey Maker” by the press, he gets bored with that too.   With detectives Smith (Jennifer Rubin) and Renart (Michael Paré) on the case and actually zeroing-in on him, he decides to up the ante with an over-the-top performance that will long be remembered by a national television audience who tuned in for one thing … and got reality shoved down their throats instead. 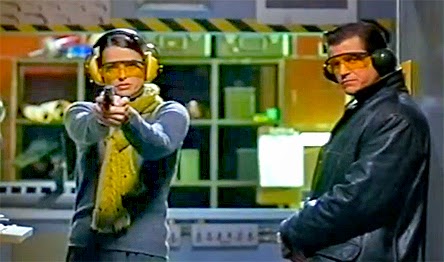 Teamed with Sanctimony on Jan. 27 is writer/director Uwe Boll’s Blackwoods, which teams Patrick Muldoon with Michael Paré and Keegan Connor Tracy in a double role.   Matt (Muldoon) is having recurring flashbacks of a horrible auto accident that took the life of a young woman … he was responsible and the guilt of his lack of judgment haunts him.

But things are looking up, he has met Dawn (Keegan Connor Tracy) and it’s love, love, love … so much so that he is on the way to meet her family.   But, if you know your Uwe Boll films, this vision of loveliness and tranquil bliss is not as it seems.   Soon poor Matt will be longing for flashbacks to break up the horror of what new fate awaits him!!!

Posted by DVD & Blu-ray Release Report at 6:12 AM No comments: 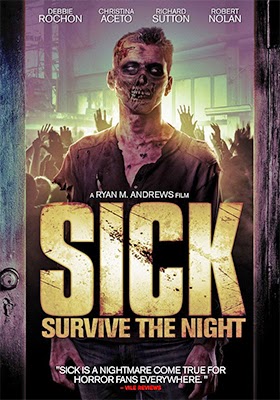 On Jan. 6 infected zombie hordes will be unleashed by Midnight Releasing.   Why Jan. 6?   That’s an excellent question — it is the DVD debut date for director Ryan Andrews’ Sick: Survive the Night.

A plague has run amok for two years.  Most of the world’s population has fallen victim to the mysterious disease, which has two distinct periods in its inevitable cycle of infection and death.  First you get sick and enter the zombie stage … a mindless need to consume human flesh.   The second phase, you die.

Dr. Rozetta (Christina Aceto) has been desperately trying to find a cure, but the entire infrastructure of human society has finally reached a point of collapse and she suddenly finds herself on the run with complete strangers.   Survival means outwitting the sick, which become active at night, until you are either sick yourself … or dead!

Posted by DVD & Blu-ray Release Report at 6:07 AM No comments:

Universal Studios Home Entertainment's Walk Among The Tombstones On DVD And Blu-ray Jan. 13 Universal Studios Home Entertainment has announced that writer/director Scott Frank’s film adaptation of Lawrence Block’s pulp detective novel, Walk Among the Tombstones, will be available as DVD and Blu-ray/DVD Combo Pack (with UltraViolet) editions on Jan. 13.

The ARR for this Liam Neeson thriller is 116 days and the box office haul was right at $26 million.

Bonus features include two production featurettes, “A Look Behind the Toombstones” and “Matt Sudder: Private Eye” (which is exclusive to the Blu-ray SKU).

Posted by DVD & Blu-ray Release Report at 6:04 AM No comments:

Sony Pictures Home Entertainment Reveals That Filmmaker Casey La Scala's The Remaining Will Be Available On DVD And Blu-ray This Coming Jan. 27 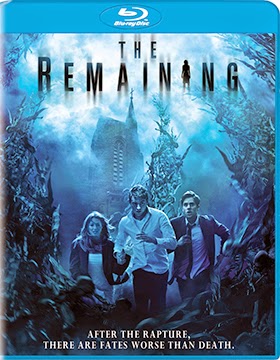 Film producer Casey La Scala, who has been involved in the production of such diverse films as A Walk to Remember, Grind and Blue Collar Comedy Tour: The Movie, took a marked change of direction as not only the producer, but co-writer and director of the biblically-based horror film, The Remaining.

Sony Pictures Home Entertainment has tabbed Jan. 27 as the street date for both DVD and Blu-ray editions of the film … the ARR works out to 144 days and ticket sales from the film’s limited theatrical run (under 100 screens) currently stands at $1.2 million.

It’s a blissful day for Skylar (Alexa PenaVega — From Prada to Nada, Walkout) and Dan (Bryan Dechart) as they are getting married.   Family and friends are gathered, they are pronounced man and wife and then without warning The Rapture begins.   Those that are left behind, which includes the newly married couple, are faced with the horrors of this biblical prophecy. 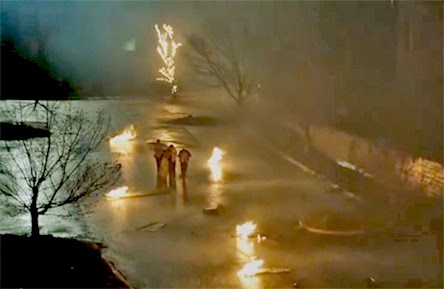 The Remaining plays like a supernatural horror film, complete with creatures (demons), end-of-the-world weather events (hail the size of bowling balls) and survivors huddled together trying to make sense of what is happening on a global scale.

Bonus features include the featurette titled “Divine Revelations: Making The Remaining” and a deleted scene.

Posted by DVD & Blu-ray Release Report at 6:01 AM No comments:

Email ThisBlogThis!Share to TwitterShare to FacebookShare to Pinterest
Labels: DVD and Blu-ray Release Report, Sony Pictures Home Entertainment Reveals That Filmmaker Casey La Scala's The Remaining Will Be Available On DVD And Blu-ray This Coming Jan. 27 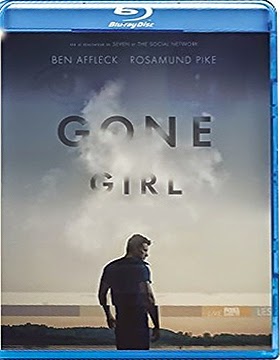 With a Best Picture Oscar nomination all but certain, 20th Century-Fox Home Entertainment used the cover of the Thanksgiving holiday weekend to bury any potential media coverage of director David Fincher’s Gone Girl and its arrival as both Blu-ray and DVD product offerings on Jan. 13.

You would think that a box office tally of $156.8 million in the domestic market and multiple Oscar nominations in the offing, the home entertainment group would have cranked up the PR and marketing efforts for this one, but sadly, no.

In keeping with its recent policy of minimalist support for new theatrical hits making their way to the home entertainment market place there will be little, if any, effort expended in promoting the Gone Girl’s debut. 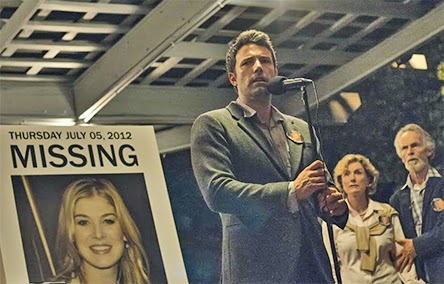 With Oscar nominations to be revealed on Jan. 15 it appears that — and this is only a guess — 20th Century-Fox Home Entertainment figures that the Jan. 13 street date will be sufficient enough as a marketing and PR effort to garner some sales from those who happen to stumble upon SKUs at retail.

The only confirmed bonus feature is commentary from director David Fincher on the Blu-ray edition.

Posted by DVD & Blu-ray Release Report at 5:56 AM No comments: