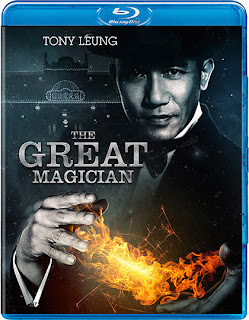 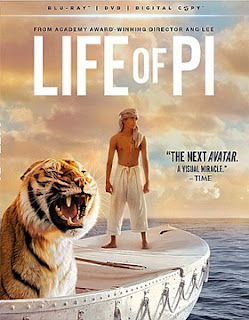 The staff and management over at 20th Century-Fox Home Entertainment have been dealt some tasty cards of late courtesy of their theatrical (and acquisition) counterparts.

Last week they were trumpeting the arrival of Skyfall on Feb. 12 and Parental Guidance on Mar. 26.   Next, the remake of Red Dawn was dropped in on Mar. 5 (for the record, the ARR comes in at 102 days and the box office take was better than expected at $44.5 million … that’s a pretty amazing number for a dopey remake).

The ARR for this dark horse Best Picture nominee is 109 days and the box office take (and growing) currently stands at a very solid $103.4 million.

In a year where you can start by filling in your “Oscar Ballot” with wins for Daniel Day-Lewis and Anne Hathaway ... they are, as they say, “in the bank.”  Trying to figure out the Best Picture winner is a horse of a different color.

In an Oscar derby featuring Argo and Zero Dark Thirty (which could likely split votes), Les Misérables (a brilliantly-delivered film adaptation of the beloved stage musical, but … iffy) and Lincoln (marked by a stunning performance by Day-Lewis, but tedious in its telling), there is the not-so-unlikely possibility that a film such as Life of Pi could slip in as the Best Picture winner.

It is a strong field this year and lots of elbows will be thrown.  Academy voters are going to be split seven ways from sundown on trying to ferret-out which film deserves the gold.   You won’t get any clues from the track record for this group, which at times can be a bit sketchy on getting it right — Shakespeare in Love over Saving Private Ryan; The Greatest Show on Earth over High Noon?   Please! 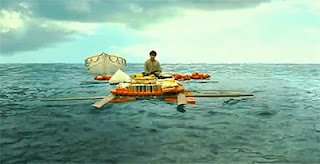 And with the rush that Silver Linings Playbook is a making at the box office (all generated by word of mouth) in the past three weeks, you can’t even count that one out.

As to Fox’s SKU configuration, there are two Blu-ray SKUs — a three-disc Combo Pack featuring the 3D theatrical experience on Blu-ray, a 2D Blu-ray companion and a DVD edition of the film and a Blu-ray/DVD Combo Pack (both of these SKUs include UltraViolet) — and a stand-alone DVD edition.

As to bonus features, those are limited to the Blu-ray SKUs.   Included are a pair of featurettes — “A Remarkable Vision” and “Tiger, Tiger Burning Bright” — the feature-length documentary titled A Filmmaker's Epic Journey and a multi-part stills gallery.   Exclusive to the 3D SKU are four deleted scenes and two examples of 3D/2D VFX Progressions — “Tsimstum Sinking” and “The Wave Tank.”

Posted by DVD & Blu-ray Release Report at 4:10 PM No comments:

The Home Entertainment world revolves around movies.   Sure, there are lots of other product options — Special Interest, Sports, KidVid, and on and on – but the big money is to be found in those gems mined from the theatrical market place.

It is still early, but if the January release trends at the local multiplex don’t begin to pick up some steam as we move toward a winter thaw and into the glories of spring, 2013 is starting to show all the signs of gearing up to head off of a cliff. 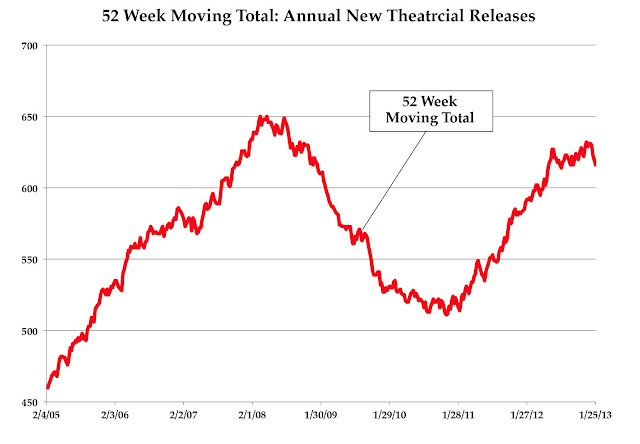 The question is: Are we at the end of a cycle and about to head in the other direction, at least in terms of new theatrical releases?

The last time the industry pulled a u-turn of this nature was during the summer of 2008, which, also corresponded to the financial markets heading off of a cliff of their own.   Not to say that there is a connection, but it does give one pause to think about what all of the little lemmings are lining up to do.

From the peak of 650 films opening theatrically to the bottom, roughly two-and-half years later, 140 films simply disappeared off of the annual theatrical release schedule.   Mainly little films, where producers and their partners concluded that it wasn’t worth the money to open the film theatrically, even with a digital projection option (not having to bear the cost of 35mm prints).

The current doldrums could have several — and very reasonable — explanations.

First, there could be tardy reporting (or none at all) from some minor/indie theatrical releases that may have played a venue or two during the month (they could come late to the party and the numbers would be revised upward).   These films and their backers might not part of a reporting service … or the gross was so dismal that it would be a negative in announcing it.

Secondly, the holdover performance of the Christmas-season films could be a blocking factor in opening up screens.   Weather also has to be considered.  But these are usually factored in when release schedules are set months in advance.

Whatever the reasons, January is currently tracking at a dismal annual output of just 420 films.   You would have to retreat all the way back to 2002 to match such levels.

As we said, it is early yet and much could happen in the weeks and months ahead to bring the annual output projection back into the 580 to 620 range.   Stay tuned.

Dead In France From Breaking Glass Pictures On Mar. 26 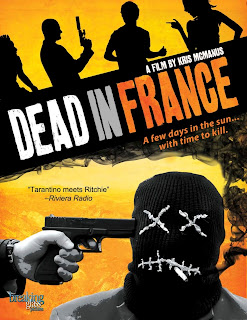 The Brits seem to have a feel; a certain flair for black comedy.   They seem to have their own unique brand.  Sir Alec Guinness had a rich history of comedy on the black side.  Peter Sellers had his share too.

Guy Ritchie has made something of an art form out of it with Lock, Stock and Two Smoking Barrels and Snatch.   American filmmakers tend to be linear; the French, lyrical … but the Brits make more cerebral; complicated, detailed and nuanced black comedies.   Martin McDonagh’s In Bruges in another great example.

Now comes writer/director Kris McManus’ Dead in France, out on DVD from Breaking Glass Films on Mar. 26.   It is one sweet black comedy, filled with double-dealers, a hitman — a hitwoman too to be fair — a femme fatale and whole lot of missing money.

Charles (Brian Levine) is something of a blue collar hitman.   He could be a smart guy for all we know, but he’s spent all of his formative years whacking people.   He hasn’t really developed much interest in anything else … you have an assignment, you do it.   He’s a professional.

He’s piled up some doe for retirement and has left for the south of France and a place on the Mediterranean to sort things out.   It is here that the wheels begin to come off … and the fun begins.

What makes the film work is the dialog.   Dead in France is one of those little films where you would love to know the backstory.   Levine, who hasn’t much in the way of film credits, teams up with McManus (only his second film) and they deliver a gem. 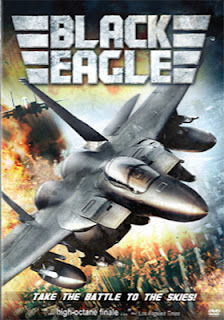 It has been called South Korea’s Top Gun.   In many ways director Kim Dong-won’s Black Eagle (aka: Soar Into the Sun) is a superior film, at least technically speaking.

The high-flying action arrives in the domestic market on Mar. 12 from CJ Entertainment — both with its original Korean language (with English subtitles) and as a separate English-dubbed viewing option.

Remember, Top Gun is 1986 film technology and there has been light speed changes in the nearly two decades since filmmaker Tony Scott sent Maverick and Iceman aloft to spar with MIGs at mach speed.

There’s another little edge that Black Eagle has in making it a tad more compelling.   While Cruise and Kilmer battled “generic” MIGs, unless you’ve been living the life of an eggplant, the tensions between South Korea and Kim Jong-un’s medieval dictatorship to north are very real.   Stuff that happens here could actually happen.

For American audiences, Jung Ji-Hoon (aka: Rain) is at least familiar to them if they caught Speed Racer.   He draws the lead here as the hot-shot pilot who has the flying skills, but lacks discipline (sound familiar).   He’s good … he hits all the right notes.

Yoo Joon-sang is his competition and Shin Se-kyung is the eye-candy love interest, but the real draw for Black Eagle are the action sequences, especially the tight flying stunts through downtown Seoul.

Posted by DVD & Blu-ray Release Report at 8:39 AM No comments:

Image Entertainment Has The Wicked For DVD On Apr. 30

As every genre-fan knows, you need teens, even college-age kids, to do stupid things.  It is part of the process — don’t throw rocks at the witches’ house.  So they throw rocks at her house.   If they don’t, there’s not much of a movie. 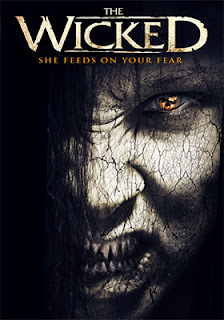 Word arrived this past week that Image Entertainment has secured the DVD distribution rights to director Peter Winther’s The Wicked, which is set for retail delivery on Apr. 30.

Every kid growing up in Summerset (filmed in around the Detroit area) knows the little not-so nice nursery rhyme:

“Season of the Equinox,
the witch besets her kill.
One less soul in the town to know,
taken against their will.”

It’s local folklore that the old creepy house — out in the creepy woods of course — is home to a 400-year old witch (played by Cassie Keller — an interesting screen resume that includes topless roles in both A Very Harold & Kumar 3D Christmas and Hostel: Part III … is that typecasting?), who stays forever youthful by eating little children.

So when little Amanda (Caitlin Carmichael — Backlight, Lizzie, etc.) goes missing from her bedroom, the local teens quickly jump to the conclusion that it is the work of the legendary witch.

Now there is another little twist to the legend.   If you throw rocks at the witches’ house, hit it, but don’t break any windows, then she can’t get you.   Of course there’s no witch, it’s a teen do-or-dare thing (usually involving alcohol and sex), so when Zack (Justin Deeley — best known as Austin in the update 90210 television series) and three of his friends go out to toss a few stones at the old place it’s pretty much akin to a little foreplay with the girls. 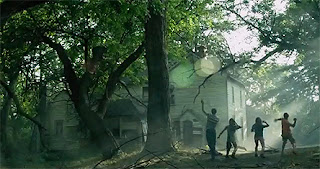 Toss in a snoopy brother and a misplaced pebble — oops — and a half-dozen kids from Summerset are about to find out that something wicked this way truly comes.   Not all will survive the night!