For More Information On Wolfe Video's DVD Release Of Petunia On Sept. 3 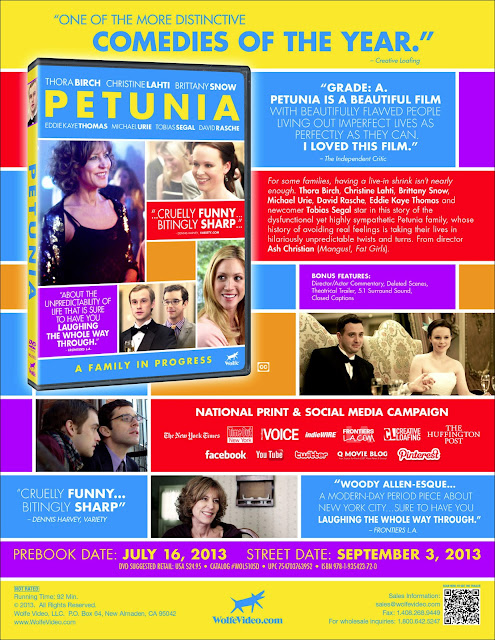 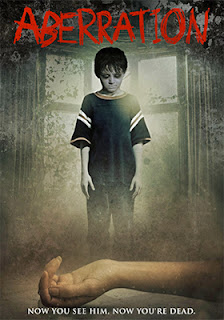 Pity Christy (Gwendolyn Garver — The Brazen Bull, Meeting a Bullet, etc.), not because she is sexy and beautiful, those are assets, especially for a high school student, but they do her little good these days.   It seems that she is literally caught between the world of the living and the realm of the dead.

Her personal hell — dreaming while awake; much akin to being tuned into a late night horror channel with no off switch — is manifesting itself as visions of her friends and classmates meeting grisly ends.   A glimpse here, a vision there … a bump in the night.

And always present is the ghostly aberration of a young boy.   She can’t make heads or tails of it, but the body count is mounting and the terror is unrelenting! 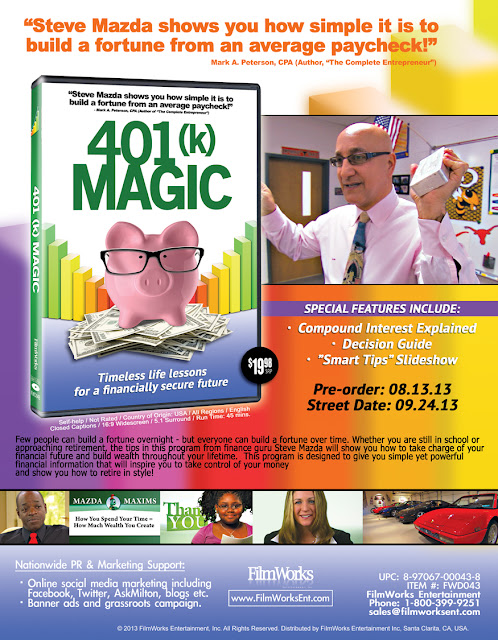 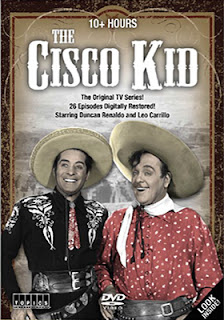 The Film Chest is teaming up with Topic Entertainment on Aug. 27 to deliver 26 digitally restored episodes of the classic television Western series, The Cisco Kid, as part of a six-disc DVD collection.

Based loosely on the O. Henry short story from the turn of the century, “The Caballero's Way,” the Cisco Kid and his sidekick Pancho became part of America lore with a series of films that stretched all the way back to the silent era.  Included in the mix was the 1928 film release of In Old Arizona, with Warner Baxter winning Best Actor laurels for his portrayal of the Cisco Kid.

The television series, one of the first to take advantage of the new format with a launch in Sept. of 1950 (and filmed in color, even though TV sets at the time were black and white), starred Duncan Renaldo as Cisco and Leo Carrillo as Pancho (the first Hispanic television stars — beating Desi Arnaz (and Lucy) to the smallbox by a full season. 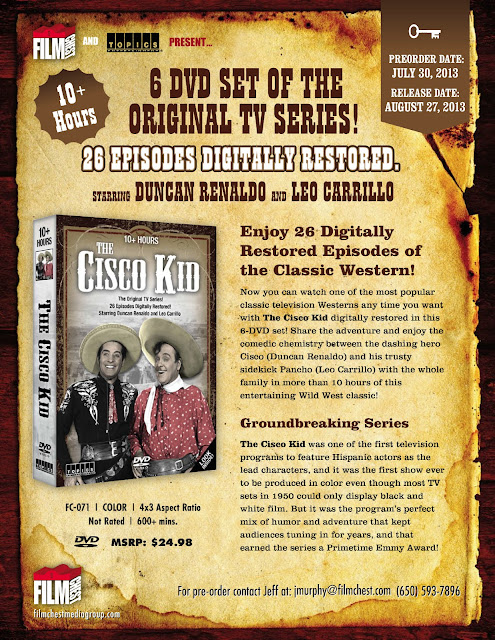 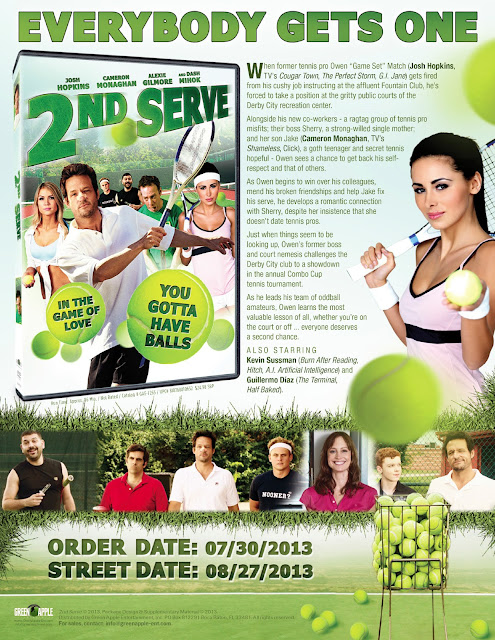 Breaking Glass Pictures Says I Do On Sept. 3 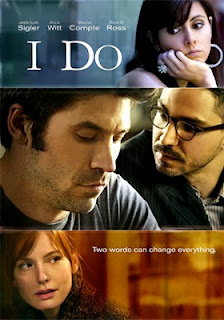 Legal, illegal, married, not-really-married and in love.   That’s the set up for director Glenn Gaylord’s I Do, due out on DVD from Breaking Glass Pictures this coming Sept. 3.

OK, we will be the first to admit that some of the twists and turns seem a bit contrived, but that aside I Do is a delightful bit of soap about a gay man named Jack (David W. Ross — boy band member of Bad Boys, Inc.), a 30-year-old Brit who has been living here since being a teenager, but who never got around to applying for citizenship.

During those 16-odd years his brother got married, had a daughter and then got killed in an auto accident, leaving him to help out his sister-in-law and niece with the daily grind.  That could have gone indefinitely, but the INS has come calling about his green card status and now he has to make some decisions.   All of which, as things turn out, to be bad.

He’s got a lesbian pal named Ali (Jamie-Lynn Sigler — best known as Meadow on The Sopranos television series), who agrees to help him out with a sham marriage, but no sooner does he tie the knot when he meets up with Mano (Maurice Compte) and then things quickly go downhill.

Mya (Alica Witt — Wiener Dog Nationals and as Cheryl on Friday Night Lights), his sister-in-law is none too happy with her dependence on Jack — why not him instead of her husband, she reasons.  Which makes him miserable, especially since he has grown attached to Tara (Jessica Tyler Brown), his brother’s child.

With Mano in the picture — who has issues that he has to deal with back home in Spain — Ali suddenly gets nervous that the INS will discover that a wicked web has been weaved and jail time could be her fate … which, of course, makes Jack miserable.

The timing for I Do couldn’t be better … with the same-sex marriage issue both in the courts and on the front page, but then if Jack could just marry Mano, we wouldn’t have I Do!

Email ThisBlogThis!Share to TwitterShare to FacebookShare to Pinterest
Labels: Breaking Glass Pictures Says I Do On Sept. 3, DVD and Blu-ray Release Report 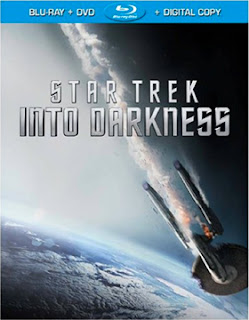 As we move through the weeks of summer we can expect to see at least one blockbuster announcement each week for the post-Labor Day release period.   $100 million-plus box office monsters on the march from their multiplex venues to home entertainment (and beyond).

This week’s heavyweight comes knocking courtesy of Paramount Home Media Distribution … and that would be director J. J. Abrams’ Star Trek Into Darkness, which has been given a Sept. 10 release date.

The ARR works out to 116 days and ticket sales this summer for this second installment in the Star Trek reboot currently stand at an impressive $223.1 million in the domestic market.
Paramount has a three-SKU product offering planned.   There will be a stand-alone DVD edition and two Blu-ray/DVD Combo Packs — one with a 3D presentation of the movie and one without (both feature UltraViolet). 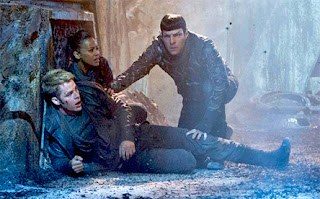 The gamble of reinventing the original Star Trek series, with Kirk (Chris Pine) and Spock (Zachary Quinto), by introducing an alternate timeline is now beginning to payoff.   With fans knowing the “passion play” of the original Star Trek adventures (even if they were from the 1960s) it was all but impossible to get all that creative with a narrative that was already pre-set.   But with the alternate timeline introduced by Nero, the time-bending Romulan from the 2009 reboot, that problem is neatly tucked away.

Indeed, after this installment Abrams — and those who follow — will be able to crank out three or four sequels that can boldly go where Kirk, Spock and the rest of the Star Trek crew have never been before.   It’s just a question of how long Pine and Quinto want to play the roles.   Fans have accepted them … just look at the numbers!

What was also nice about Star Trek Into Darkness is that Abrams — with a screenplay that featured input from Roberto Orci (Mission: Impossible III, the Alias television series) and Alex Kurtzman (Cowboys and Aliens, Transformers), who collaborated on the Star Trek reboot, plus Damon Lindelof (Prometheus, the Lost television series) — was able to work the legendary superhuman Khan (aka: Khan Noonien Singh as portrayed by Ricardo Montalbán in both the original TV series and in the 1982 feature film release of Star Trek II: The Wrath of Khan) into the new timeline.

Although quite different in appearance and mannerism, the new Khan (played by Benedict Cumberbatch) was still a nice touch for what is clearly a transition film.   With the new characters firmly established, future screenwriters will have free reign to add, subtract (crew members) and prepare new challenges for the crew of the Enterprise.

As to bonus goodies, all seven production featurettes are exclusive to the Blu-ray SKUs.  These are: “Creating the Red Planet,” “Attack on Starfleet,” “The Klingon Home World,” “The Enemy of My Enemy,” “Ship to Ship,” “Brawl by the Bay” and “Continuing the Mission.”

In other release news this week from Paramount Home Media Distribution, scheduling for TV-on-DVD product offerings has now moved into the month of October. 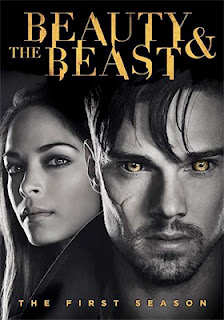 Oct. 1 will see the four-disc debut of the Ashley Rickards’ teen angst comedy series, Awkward: Seasons 1 & 2.   Also on the same first Tuesday in October release date look for the six disc launch of the revamped Beauty and the Beast: The First Season (all 22 episodes) starring Jay Ryan as Vincent and Kristin Kreuk as Catherine.

The following week, Oct. 8, Paramount has the five-disc DVD release of 90210: The Complete Fifth Season planned.

Warner Home Video To Bring The Best Years Of Our Lives To Blu-ray On Nov. 5 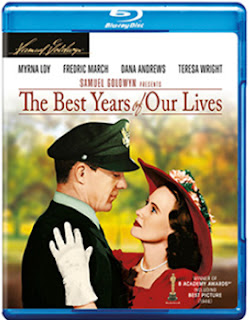 The war is over and Hollywood is back to making motion pictures in a big way.  Theatres are crammed to the gills with attendance records that will never be broken (television hadn’t kicked in just yet) and one “classic” after another is released — all with stars, stars and more stars.

Not only did The Best Years of Our Lives win Best Picture, but William Wyler took home his second Oscar for direction (he won for Mrs. Miniver in 1942 and would bag his third Oscar in 1960 for Ben Hur — 12 nominations in all), plus Fredric March and Harold Russell took home Best Actor and Best Supporting Actor Oscars respectively … and three-time Pulitzer Prize-winner Robert E. Sherwood added an Oscar to his collection for his screen play adaptation of MacKinlay Kantor’s novel (he would go on to win the Pulitzer Prize in 1956 for his sprawling Civil War novel, “Andersonville”). 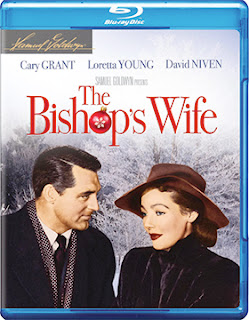 Beyond the terrific story of war vets returning to civilian life and the heap of awards the film received, The Best Years of Our Lives features an amazing cast — included are: Dana Andrews, Myrna Loy, Teresa Wright, Virginia Mayo, Steve Cochran, Ray Collins and Hoagy Carmichael (and more).

As to bonus nuggets, there is an introduction by Virgina Mayo, vintage interviews with both Virginia Mayo and Teresa Wright and the original theatrical trailer.

The Bishop’s Wife — starring Cary Grant, Loretta Young and David Niven — was also adapted to the screen by Sherwood.   As mentioned the film was nominated Best Picture (losing out to Gentleman’s Agreement) and director Henry Koster, known for such films as Harvey, The Robe and Flower Drum Song, received his only Oscar nomination for his work here.

No bonus features are planned at this time. 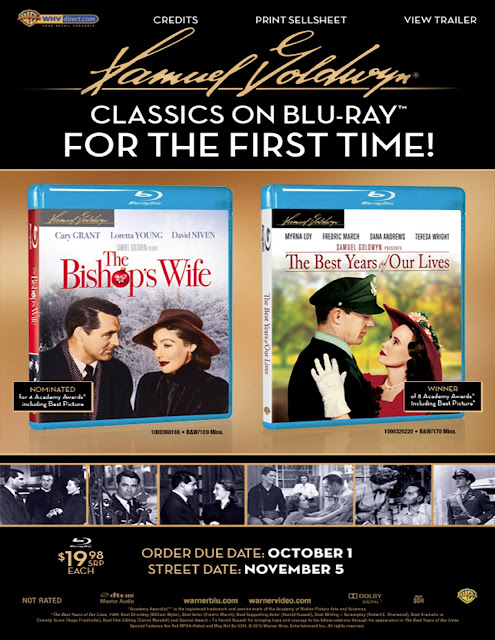 Posted by DVD & Blu-ray Release Report at 7:22 AM No comments:

Email ThisBlogThis!Share to TwitterShare to FacebookShare to Pinterest
Labels: director William Wyler, DVD and Blu-ray Release Report, Warner Home Video To Bring The Best Years Of Our Lives To Blu-ray On Nov. 5 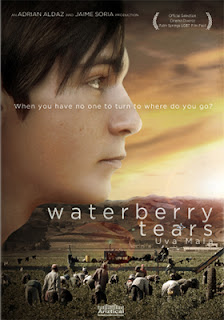 Ariztical Entertainment will be bringing director Adrian Aldaz’s Waterberry Tears, the insightful story of a gay high school student named Goyo (Raul Rodriguez) growing up in the tightknit farming community of Coachella, to the home entertainment market this September.

The DVD debut date for this winner of the 2011 Silver Palm Award at the Mexico International Film Festival will be Sept. 24.

Drawing upon his own experiences growing up in the Coachella Valley, filmmaker Aldaz (with a script from his former school mate, Jamie Soria) expertly blends the culture, lifestyles (mores) and tough working conditions of the Mexican immigrants of the area with the personal story Goyo’s forbidden sexual leanings — a no-no in his father’s eyes and a source of deep family conflict.

As if the tension wasn’t ratcheted-up high enough, it soon reaches a boiling point when a newly arrived farmhand named Lucio (Daniel Lugo) moves into the area and manages to have relationships with both Goyo and Goyo’s twin sister, Rosa (Mayra Gil) … love, betrayal and both the fabric of family and of the community as a whole will be tested in this heartfelt drama. 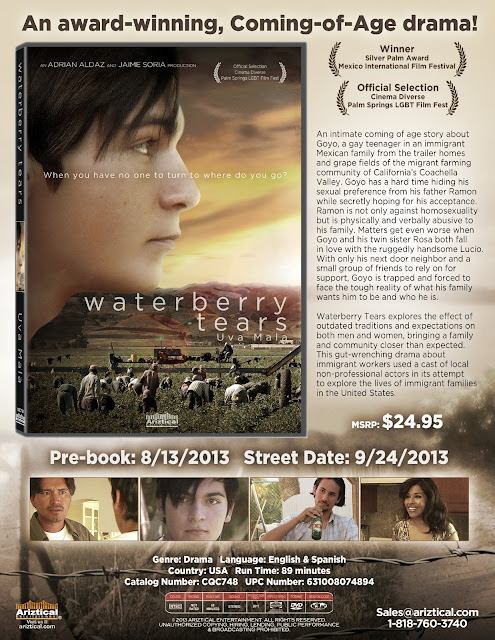