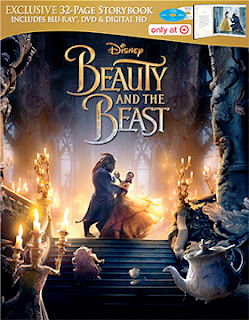 Cry Havoc … and let slip the dogs of “retail” war (with a tip of the hat to Shakespeare)!!!
When it comes to Walt Disney Studios Home Entertainment’s mega-hit, director Richard Condon’s Beauty and the Beast, there are no rules; no safe spaces.   So it came as no surprise when Target went first — even beating the Disney Store (which is usually ahead of the official PR announcement) — with the news that both DVD and Blu-ray/DVD Combo Pack editions will ship on June 6.

The ARR is a sizzling-fast 81 days and ticket sales, for this sure-to-be Best Picture nominee, currently stand at $454.7 million.

Target and Best Buy (which also began taking pre-orders) were both skimpy on the bonus goodies, except to tout their exclusives.   Target has a 32-page collectible booklet and Best Buy is showing off an exclusive steel case.

Disney should be along shortly with an official press announcement and we will update when that arrives.

Chaos continues in the Kingdom of the Mouse over the official announcement of director Richard Condon's smash theatrical release of Beauty and the Beast for the home entertainment marketplace.

Here's the latest: Target and Best Buy pulled the specific street date of June 6 from their respective websites.

However, the home entertainment distributor WaxWorks confirms the date in their current edition of the Hot Sheet.

Posted by DVD & Blu-ray Release Report at 7:38 AM No comments: