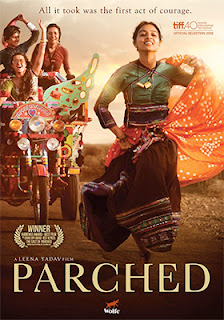 India is a huge filmmaking machine.  Bollywood, that’s what it’s called!  And there are some major pipelines to the domestic market for the output of these films on both DVD and Blu-ray.   Big films; big players … that’s just the way of the world.

However, when word that indie supplier Wolfe had acquired Indian filmmaker Leena Yadav’s latest, Parched, it came as quite the surprise.   Her film, Shabd, for example — starring five-time IIFA Awards-winner (the equivalent of our Oscars) Aishwarya — arrived on these shores by way of Eros (one of the biggest distributors of Bollywood films).   Yes it is quite the coup for Wolfe to pick off a film of this stature.

Wolfe announced this past week that Parched will be making its domestic DVD debut on July 5, so be sure to circle that date on your must-see calendar for this Hindi-language import.

Filmed primarily on location in Rajasthan (northwest part of India — very near the Pakistan border) by none other than Academy Award-winning cinematographer Russell Carpenter (1997, Titanic … plus such films as Ant-Man, The Lawnmower Man, True Lies, The Negotiator, etc.) and starring a quartet of frontline talent headed by Tannishtha Chatterjee in lead role of Rani (Bhopal: A Prayer for Rain, Gulaab Gang, Brick Lane, Anna Karenina, etc.), a widowed mother.

She is joined by Radhika Apte as her best friend, Lajjo (Dhoni, The Waiting Room, etc.), Ugly, Hate Story 2, etc.) as Bijli, a woman of low standing from the outside world and Lehar Khan (Jalpari: The Desert Mermaid), the teenager whose actions serve as the catalyst for the story.

Rani lives in a rural village in the Thar Desert, where she was married-off as a child bride, soon widowed and has a 17-year old son named Gulab (Riddhi Sen) who is about to repeat the cycle in this largely misogynist community.   Still a young woman in her 30s (by Western standards, that is) Rani’s short-lived moment of happiness (her son taking a bride), is soon dashed when the 15-year old bride-to-be, Janaki, cuts off her long and beautiful hair in an act of defiance.   There goes the marriage!

If the truth be known, her son is a bit of a layabout, a punk who has no business taking on a teenage bride and who would rather hang with his buddies and enjoy the company of the “ladies of the night” in the nearby city.

Rani’s best friend, Lajjo, fares no better.  She is often seen nursing wounds from beatings given her by her husband for not bearing him a child — a cycle of abuse with no end in sight.

So there you have it, a less than enlightened living environment (a generational thing), a broken hearted mother, a miserable son, a rebellious teenage girl and a woman trapped in an abusive marriage.   And then comes Bijli, a long-time friend and member of a travelling “entertainment group.”   She’s an “exotic” dancer (a pole-dancer, get the picture) who is back in town once again to entertain the men (village to village, an endless cycle).

One look at Lajjo and Bijli knows the truth, another beating.   But when she suggests that perhaps it is her husband who is the problem, everything changes.  Why of course … it is his failure, not mine.   Talk about a bolt of lightning!

Four women — well, actually three women and a teenager — are all now free (perhaps an illusion) to explore other options.

Rani’s life in the village is ruined, Lajjo sees no future with a husband who will repeat the cycle of violence again and again until one day he goes too far, and Janaki, she’s a disgrace to her family, what future does she have?  And, of course, Bijli, despite her beauty and her intelligence she is already an untouchable outcast.

Filmmaker Leena Yadav’s Parched is a bold movie, especially for Bollywood, that explores the relationship between these women, who find strength in each other and perhaps the courage to break free of centuries of repression.   Uplifting, sure; easy, sadly, no … but the die is cast and your heart is with Rani and her friends. 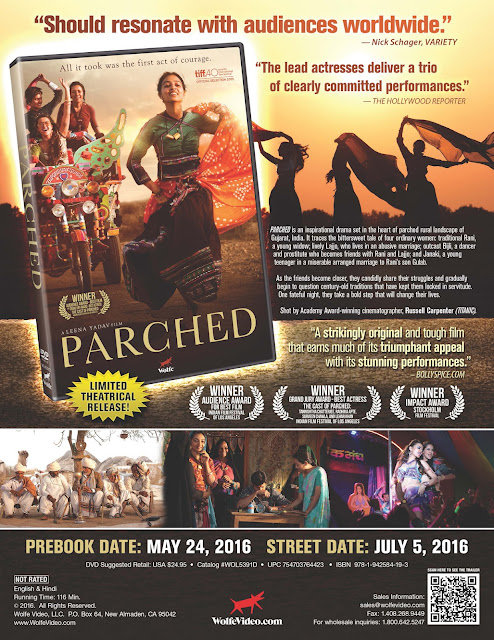 Posted by DVD & Blu-ray Release Report at 4:46 PM No comments:

Love Machine Films Teams With MVD Entertainment Group For The May 20 DVD Debut Of The Nasty Terrible T-KID 170: Julius Cavero 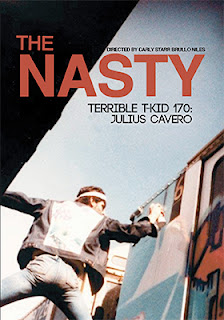 Back in the 1970s when the World Trade Center rose above the city of New York and the likes of Philippe Petit marked his claimed to fame by wire-walking between the towers another New York legend was “marking” his claim to fame as well.   That would be one Julius Cavero, a teen from the Bronx who was known as simply T-Kid 170.

Tagger, graffiti artist, vandal, juvenile delinquent … pick a name, he’s been called it, and worse.   His artistic canvas: the city’s fleet of subway cars.  While others came and went, T-Kid 170 endured.   He became a legend.

Filmmaker Carly Starr Brullo-Niles (Dying in America) blends vintage footage from Cavero’s golden era (including never before seen home movies) with interviews of his contemporaries and extended conversations with Cavero about his style … his life story.

The Nasty Terrible T-KID 170: Julius Cavero gives the armchair voyeur a rare look into this unique subculture and is something of a time capsule glimpse into New York City of another era. 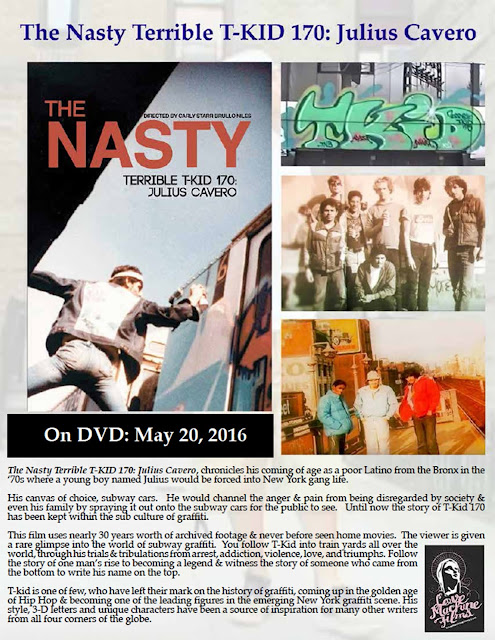 Posted by DVD & Blu-ray Release Report at 4:39 PM No comments:

Cleopatra Records Taps May 20 For The DVD Release Of Documentary Filmmaker Orshoski’s The Damned: Don’t You Wish We Were Dead 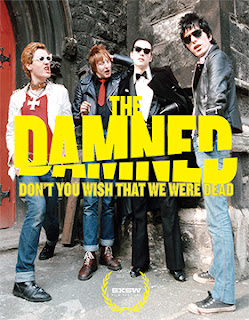 Cleopatra Records, with domestic sales and distribution support provided by MVD Entertainment Group, will bring documentary filmmaker Wes Orshoski’s “rockumentary,” The Damned: Don’t You Wish We Were Dead, to market as a Blu-ray/DVD Combo Pack on Friday, May 20.

Following the success of his 2010 look at Motörhead’s heavy metal rocker Lemmy (Kilmister) in the feature-length documentary Lemmy, Orshowski turned his attention to England’s most under-rated punk rock bands, The Damned.

The Clash and Sex Pistols got the ink, but it was Dave Vanian,  Brian James, Captain Sensible (aka: Raymond Burns) and Rat Scabies (Chris Millar) who were right there at the dawn of punk rock (circa 1976) with the first single, “New Rose.”   This is their story ... and they continue to rock-on to this day (40 years and counting).

In addition to conversations and insights from the members of The Damned, Orshoski’s includes interviews with the likes of Blondie’s Chris Stein and Clem Burke, The Clash’s Mick Jones, Pink Floyd’s Nick Mason and more.  Also included in the documentary are vintage performance as well as newly filmed concert footage of the group. 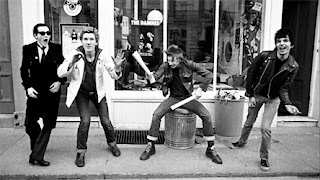 Bonus features include a tour of Croydon (outskirts of London) by Burns (Captain Sensible), who is also featured in an impromptu sidewalk gig with SNL alum, Fred Armisen (filmed in Hollywood). 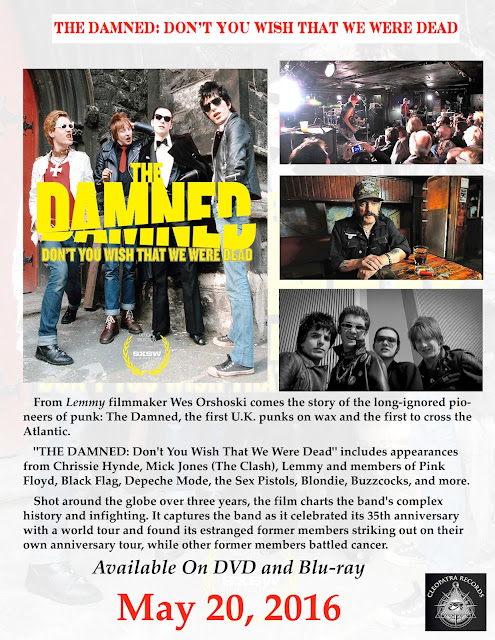 Email ThisBlogThis!Share to TwitterShare to FacebookShare to Pinterest
Labels: Cleopatra Records Taps May 20 For The DVD Release Of Documentary Filmmaker Orshoski’s The Damned: Don’t You Wish We Were Dead, DVD and Blu-ray Release Report 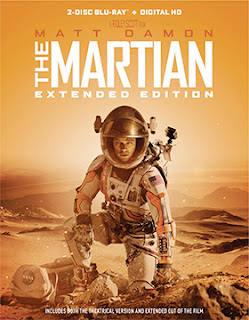 When you have a hit, it is incumbent upon the “marketeers” to find all sorts of ways to promote, re-promote it and re-promote it again (and again).   This is exactly what 20th Century-Fox Home Entertainment with director Ridley Scott’s The Martian.

June 7 will see a three-SKU helping of The Martian: Extended Edition — DVD, Blu-ray and 4K Ultra HD products — which features additional ten minutes of footage culled from the theatrical release.

Email ThisBlogThis!Share to TwitterShare to FacebookShare to Pinterest
Labels: 20th Century-Fox Home Entertainment To Release An Extended Cut Of Director Ridley Scott's The Martian On 4K Ultra HD On June 7 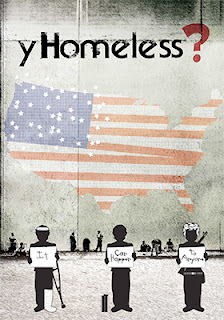 Over the years Glen Dunzweiler has worked in sound design, lighting design and has been instructor and asst. professor at both UC Riverside and CSU San Bernardino.  In short, educated, professional and talented.

In 2010/2011 he had something of a financial crisis — much like many homeowners in Southern California had at the time.   It hit him hard.  “What is it  going to be like to lose everything and be on the streets,” is the question he asked him.

Dunzweiler’s life at that moment was one big LEMON … and so he did what any creative person would do, he made lemonade.   With his own reality staring him in the face he embarked on a four-month sojourn, living in his car — couch-surfing with friends — and using his national fitness club membership for showers.

He interviewed the homeless and the professionals and care-givers who try to help and the result was the feature-length documentary, yHomeless?, which will be making its DVD debut courtesy of Cinema Libre on July 12. 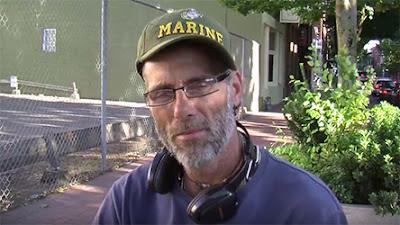 Who are the homeless?   How do they get through each day?   His film is insightful, all the more so because he didn’t take to the streets with an agenda.  It’s apolitical … he just asked people he met on the streets — who saw him as one of their own — as he travelled from town to town to talk about themselves.  And they do.  He fills in some of the “whys” with interviews with professionals who try to help.

And we learn that becoming homeless can happen in a flash, but getting out can take forever.   As Wayne, a homeless man in Sacramento, so succinctly put the frustration, “How am I supposed to get a job when I smell like yesterday … three days ago?” 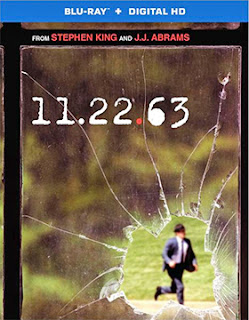 Warner Bros. Home Entertainment announced this past week that Stephen King’s “what if” time-travel adventure mini-series, 11.22.63, will be available as both DVD and Blu-ray product offerings on Aug. 9.

Over eight episodes Jake discovers that the past, the future and the present are interwoven, and tugging at the various threads can be both frustrating and dangerous.  Yes, his heart is in the right place, stop Oswald, save Kennedy, but in doing so he may create a future that no one could ever wish for. 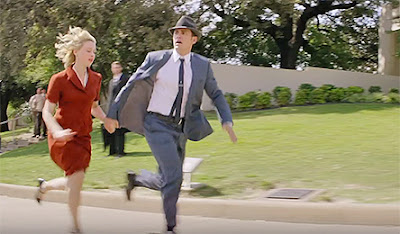 Bonus features for 11.22.63 seem to be limited to a newly-filmed roundtable session with producer J.J. Abrams, writer Stephen King, series-adaptor Bridget Carpenter (Emmy-winner for Friday Night Lights) and actor James Franco that is titled “When the Future Fights Back.”

Posted by DVD & Blu-ray Release Report at 4:13 PM No comments:

Email ThisBlogThis!Share to TwitterShare to FacebookShare to Pinterest
Labels: DVD and Blu-ray Release Report, It Is Aug. 9 For DVD And Blu-ray Editions Of Warner Bros. Home Entertainment''s 11.22.63 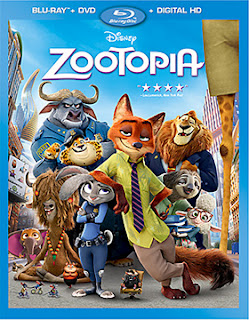 Walt Disney Studios Home Entertainment, with little fanfare — well, no, make that with ZERO fanfare — has picked June 7 as the street date for a three-SKU helping of the animation directing team Rich Moore and Bryon Howard’s smash hit, Zootopia.

It’s typical Disney of late — we’re Disney, you’re not (envision: “royal wave”).   Zootopia is simply posted to the Disney Store (that would be disneystore.com) and that’s that.  Only after the fact does PR post anything — it’s all, sort of “backwards.”

Oh well, enough of that, planned for release are a stand-alone DVD edition, a Blu-ray/DVD Combo Pack and an “Ultimate Collector’s Edition,” which is Blu-ray/DVD Combo Pack that features a 3D presentation of the film on a second Blu-ray disc.   Again, there is no commitment, at least at this time, to the newly launched 4K Ultra HD format (Disney is now the only studio not supporting the format).

The ARR is a quick-to-market 95 days and this future film franchise series packed them in with a whopping $316.4 million in ticket sales. 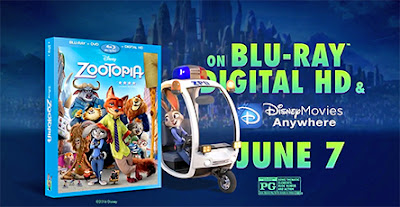 As to bonus features, there is a three-part video session titled “Zoology: The Roundtables” (about 18 minutes overall), deleted scenes, an alternate opening, something called “deleted characters” (interesting), Shakira’s music video, “Try Everything,” at least four production featurettes — “The Origin of an Animal Tale,” “Research: A True-Life Adventure,” “Z.P.D. Forensic Files” and “Scoretopia” — and early clips of Zootopia before the story was fully developed.

Posted by DVD & Blu-ray Release Report at 4:10 PM No comments: