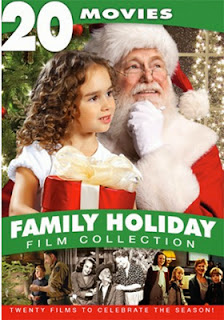 By our calculations Mill Creek Entertainment has 1,565 programs ready for consumers to select from on the run up to Christmas (two waves: Nov. 6 and Dec. 3).

Included in the mix are films, documentaries, special interest presentations and television specials … 1,565 of them in all!!!

These collections are all theme-oriented.   For example, 20 Movies: They Came From Space - 20 Amazing Sci-Fi Features includes such delights as Vincent Price starring in  the 1964 end-of-the-world saga, The Last Man on Earth, director Terry O. Morse’s 1951 exploration of the interior of the earth, Unknown World, and humankind’s only salvation rests with the crew on a spaceship bound for Venus in the 1972 sci-fi thriller Doomsday Machine. 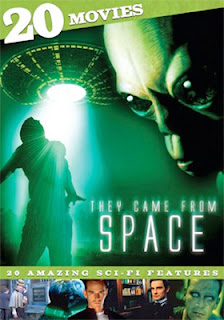 For a complete listing of both the collections and the film selections contained therein, see the listings being on page 14 of this week’s edition of the DVD & Blu-ray Release Report or visit Mill Creek Entertainment’s website at http://www.millcreekent.com.

Also on Nov. 6 look for five single-disc collections containing four programs each and priced at just $5.98.

These are also “themed” collections — for example, 4 Specials: Holiday Collection includes the Kenny Rogers Christmas (guest appearances include Trisha Yearwood and Garth Brooks), Liberace Christmas Special, Fred Waring Music (from the GE Theater) and the vintage All-Star USO Show (broadcast in 1958 with an introduction by then president, Dwight D. Eisenhower) — over three hours of programming in all. 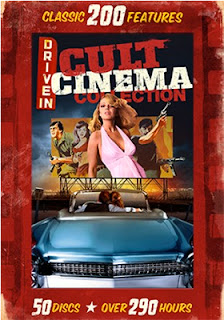 Shifting to Dec. 3, we find four DVD “bricks,” each containing 50 discs and priced at $99.98 each (before discounts at retail).   Three of these 50-disc collections contain 200 movies each — Drive-In Cult Classics Collection, Tales of Terror and Trail West  — while the fourth has no less that 325 different documentaries and special interest segments all released under a 50-disc collection titled In A Time Of War … A Complete History of U.S. Wars (189 hours worth of programming in just one collection).

When you add it all up, that 1,565 films, documentaries, special edition presentations and TV programs to select from.

For a complete listing of the 50-disc “bricks” please visit Mill Creek’s website at http://www.millcreekent.com … it could take us 189 hours just to list everything in these four collectible sets!!! 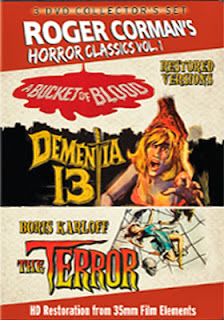 The Film Chest announced this past week that a three-film, three-disc collection of newly restored (from 35mm film elements) Roger Corman-produced horror classics will be released on DVD just in time for Halloween (street date: Oct. 29). 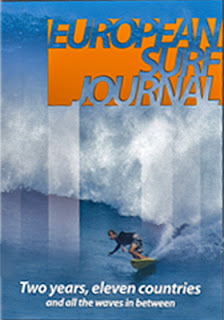 For surfers it is about the ride; the waves and that usually means the Pacific Ocean, not Europe.   But Sterling has found some pretty interesting — even exotic — locales in 11 different countries where world-renown pros have assembled with local surfers for some spectacular rides.

Filmed over a two-year period, we travel from the shores of Morocco (technically North Africa) to the frozen beauty of Iceland, with stops in such unlikely places as Switzerland, Sweden and Denmark.   But the biggest surprise are the monsters that Sterling and his surfers were greeted with on the Portuguese island of Madeira.

Bonus features include bonus footage not used in the final film and a photo gallery.

Posted by DVD & Blu-ray Release Report at 7:16 AM No comments:

Green Apple Entertainment's The Family Ready For DVD On Nov. 12 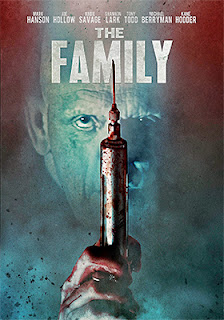 With the likes of Michael Berryman (The Hills Have Eyes), Kane Hodder (Friday the 13th Part VII: The New Blood, Hatchet, etc.) and Tony Todd (Candyman) in the credits you know it in your gut that Green Apple Entertainment’s DVD release of The Family on Nov. 12 will be a new horror entry that will be worth a look.

Writer/director Joe Hollow (Bloodstruck, Diary of Death, Cannibals) has crafted a lurid tale about a family of “filmmakers” who are working on a masterpiece.  With any family business there are bound to a few arguments over how things are done, but when their dark tale comes under deadline pressures and artistic differences abound, the only reasonable solution is for someone to take charge and get it done.

In this, getting it done literally means the elimination of cast members as the horror masterpiece degenerates into a snuff film of epic proportions!

Midnight Releasing's Night Of The Naked Dead On DVD Dec. 3 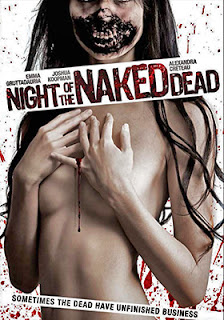 A raging storm, a mismatched couple — Emma (Emma Gruttadauria) and David (Joshua Koopman) trapped in a remote creepy Cape Code house and the sudden arrival of eerie strangers made for a night filled with terror … and the ultimate fight for survival. 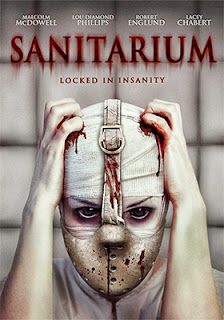 The connecting theme with Sanitarium involves Dr. Stenson (played to the hilt by Malcolm McDowell), who is the psychiatrist overseeing the three patients whose stories comprise the bulk of the narrative.   Of course we begin to suspect that he is as nutty as the people locked up there.

The first story in this horror trip through the halls of hell is from director Bryan Ramirez (who previously wrote and directed the multi-award-winning Mission Park) and involves none other than John Glover as Gustav in the segment titled “Figuratively Speaking.”   It seems that he’s a designer and model maker of up-scale dolls and, well, they have more or less taken over his life by ordering him about.

In a nice spin on this first creepy tale we have horror icon Robert Englund doing a sweet turn as his manager who sees a multi-million dollar payday if he can convince Gustav to part with his “friends.”

Next up is filmmaker Bryan Ortiz’s segment titled “Monsters are Real” (Doctor S Battles the Sex Crazed Reefer Zombies: The Movie), we have the case study of Steven (David Mazouz — as Jake, Kiefer Sutherland’s son, in the Touch TV series), a school kid who is convinced that he is being stalked by a mysterious hooded stranger.

But, it all could just be him acting out as a result of his father’s abuse (played by Chris Mulkey — The Purge, Boardwalk Empire, Little Chenier, etc.), which his teacher Ms. Lorne (Lacey Chabert — Mean Girls, Lost in Space) begins to suspect and decides to pay a visit.

We all know what paying a visit to a crazy person’s house involves … hiding your eyes!
The last segment, “Up to the Last Man,” from director Kerry Valderrama (Garrison), gives Lou Diamond Philips free reign as James Silo, a nut job who is convinced that aliens are taking over the planet that has something to do with a Mayan prophecy.   In any case his initial solution to the invasion is to dig out an underground bunker in his backyard and go full-tilt survivalist.

Somehow, since we are dealing with patients under the care of the good Dr. Stenson, that little plan didn’t work out all that well — took quite the toll on his family (if you know what I mean).  But you know, Mr. Silo might be right … maybe THEY ARE taking over!

Image Entertainment’s Sanitarium will be a great way to ring in the New Year come the last street-date Tuesday of 2013 (Dec. 31). 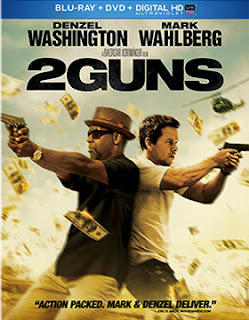 Universal Studios Home Entertainment has been showing all the signs of clearing the decks for action.   Summer blockbuster action!

With the mega-hits — Fast & Furious 6 and Despicable Me 2 — awaiting Christmas-selling season street dates, the studio has been busy with the assignment of release dates for their other recent, but smaller grossing, theatrical releases.   That is usually a sure sign that the big retail thumpers will be flowing in their wake (small first, then big, otherwise the small get lost).

During the past week Universal has plugged in three such films, which leads one to believe that this next week we will see at least one of the monsters put into play. 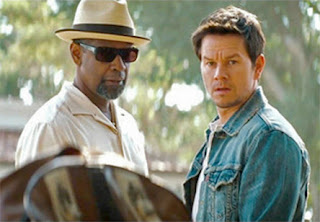 Bonus features include commentary from filmmaker Baltasar Kormákur, who is joined by film producer Adam Siegel (Drive, Scott Pilgrim vs. the World, Wanted, etc.), the featurette titled “Undercover and into Action,” deleted scenes and extended scenes.

Exclusive to the Blu-ray SKU are three additional production featurettes — “The Good, the Bad and the Sexy,” “Finding the Vibe” and “Living Dangerously.” 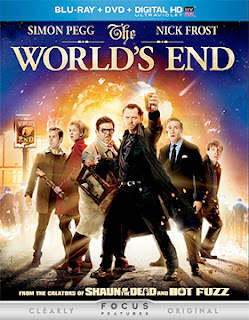 Teamed with 2 Guns on Nov. 19 are DVD and Blu-ray/DVD Combo Pack (with UltraViolet) editions of Brit director Edgar Wright’s goofy sci-fi comedy, The World’s End, starring Simon “Shaun of the Dead” Pegg as a man on a mission to complete an epic “pub crawl,” but — along with his friends — runs smack dab into an alien invasion led by human-looking robots.   Yikes!!!

The ARR is a zippy 88 days and the domestic box office haul currently stands at $25.2 million (and growing).

Bonus nuggets include commentary from Wright and Pegg, plus the making-of featurette titled “Completing the Golden Mile.”

Shifting to the street date Tuesday (Nov. 26) just prior to Thanksgiving is the biopic Jobs, directed by Joshua Michael Stern and starring Ashton Kutcher as the late Apple Computer co-founder, Steve Jobs. 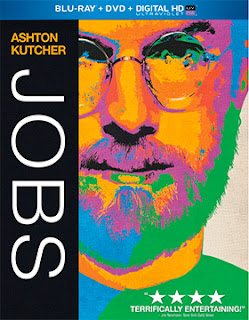 The ARR for DVD and Blu-ray/DVD Combo Pack (with UltraViolet) editions of Jobs works out to 102 days and the box office gross was $16.1 million.

Bonus features include commentary from filmmaker Joshua Michael Stern and the featurettes titled “Jobs: Behind the Score” and “The Legacy of Steve Jobs.”   Exclusive to the Blu-ray SKU is the additional featurette titled “Ashton Kutcher IS Steve Jobs.”

We suspect that Universal Studios Home Entertainment will add either Fast & Furious 6 or Despicable Me 2 to this Nov. 26 release window, with the other one (whichever one isn’t plugged in here) following in early December.

Posted by DVD & Blu-ray Release Report at 7:00 AM No comments: 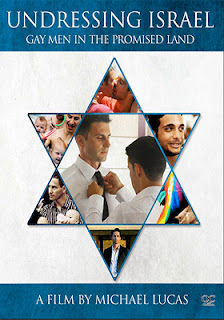 This insightful look at Israel’s vibrant, open and safe haven for gays — of all religious and ethics persuasions — closely mirrors Breaking Glass Pictures’ Oct. 29 DVD release of writer/director Michael Mayer drama (drawn from his own experiences in Tel Aviv), Out in the Dark.

In Undressing Israel, filmmaker Michael Lucas takes us on a tour of the gay community, which includes members of the military, parliament and safe sanctuary refugees from Israel’s neighbors.

Posted by DVD & Blu-ray Release Report at 6:51 AM No comments: 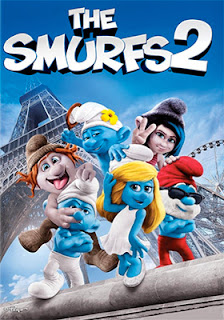 The animated summer theatrical release of Smurfs 2 will be moving to the home entertainment market place on Dec. 3 as a three-SKU product offering from Sony Pictures Home Entertainment.

Fans of the little blue guys will have three viewing options.  There will be a stand alone DVD release and two Blu-ray/DVD Combo Packs — one with and one without a 3D viewing option.   All three SKUs include UltraViolet. 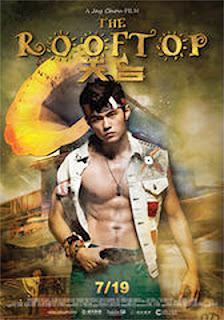 Well Go U.S.A. has added a pair of Mandarin-language imports (with English subtitles) to its 2013 DVD and Blu-ray release schedule — delivery date is Dec. 10.

Singer, actor and now writer/director Jay Chou’s strangely endearing 70’s era musical comedy, Rooftop, will be ready for fans to enjoy as either DVD or Blu-ray product offerings.   The ARR for the film’s limited domestic theatrical break is 137 days … ticket sales were $85,755.

Also getting a domestic push DVD and Blu-ray push from Well Go U.S.A. just in time for Christmas (Dec. 10) is director Ronny Yu’s lushly mounted, even epic, story of the Yang clan of the Song Dynasty (about a 1,000 years in mainland China), Saving General Yang.

A series of incredible battle sequences stitch together this story about General Yang (Adam Cheng) and the fierce loyalty of his seven sons, who battle seemingly impossible odds for honor and their vow to safely bring their father home to their mother.

Posted by DVD & Blu-ray Release Report at 6:46 AM No comments: