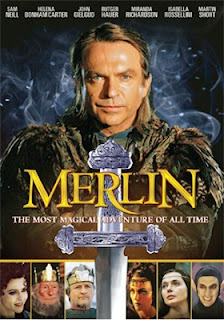 The timing of the DVD release of Merlin by Mill Creek Entertainment couldn’t be more spot-on as Warner Bros. mega-budget production of director Guy Ritchie’s King Arthur: Legend of the Sword hits theatres nationwide on May 17.

Also on the way to retailers on June 6 are four movie collections.  First up is a set of five early John Wayne Westerns, which is being promoted as John Wayne: American Legend.   Included in the group are Riders of Destiny (1933, with Gabby Hayes and Cecilia Parker), Sagebrush Trail (also 1933, with Yakima Canutt, Lane Chandler and Nancy Shubert), The Lucky Texan (early 1934 release that includes both Yakima Canutt and Gabby Hayes, plus Barbara Sheldon), West of the Divide (1934, Canutt, Hayes and Virginia Brown Faire) and lastly, Blue Steel (from the spring of 1934, Hayes and Canutt ride again with Eleanor Hunt). 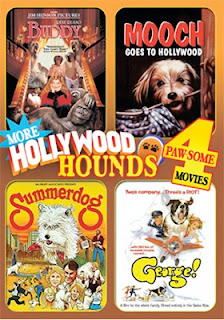 More Hollywood Hounds in a four-film set targeted for dog fanciers … the set includes director John Clayton’s 1977 family comedy, Summerdog (an abandoned mutt is taken in by the Norman family while on vacation), Buddy (1997, based on Gertrude Davies Lintz’s book “Animals are My Hobby … a true story about a rich girl named Trudy (aka Gertrude), who raised championship Briards and a gorilla named Buddy), George! (writer/director Wallace C. Bennett’s 1972 film release about a mischievous St. Bernard named George) and Mooch Goes to Hollywood (Mooch — aka: Higgins the Dog — joins the likes of Jim Backus, Vincent Price, James Darren and Jill St. John as themselves in Hollywood).

Rounding out the June 6 new DVD additions are More Star-Studded Stallions (a four film set that includes Return of October, Red Fury, Casey's Shadow and All the Pretty Horses) and the double-disc release of Selma Hayek: 4-Movie Collection (which includes Living it Up, Lonely Hearts, Timecode and The Velocity of Gary). 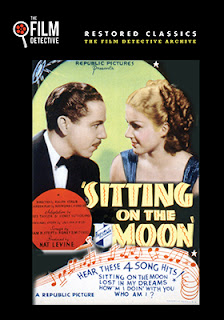 The Film Detective announced this past week that five new film restorations are on tap for delivery to the home entertainment marketplace on May 9.

Up first is director Ralph Staub’s 1936 romantic musical Sitting on the Moon. This Republic Pictures production teamed would-be composer Roger Pryor (Belle of the Nineties, The Return of Jimmy Valentine) with songstress Grace Bradley (Six of a Kind, The Cat’s-Paw, Too Much Harmony, etc. … a star in her own right, she walked away from her Paramount contract to manage the career of her husband, William “Hopalong Cassidy” Boyd) in a romantic tale that involves a jealous song-writing partner (played by William Newell) who recruits a blond floosy (Joyce Compton) to break up the romance between Pryor and Bradley.

Misunderstandings follow, songs follow and a happy resolution is at hand by the end credits … Sitting on the Moon is a breezy little number that is well worth a look. 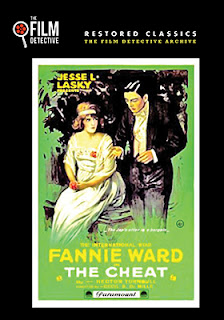 Up next is the 1915 silent film from Cecil B. DeMille titled The Cheat, which is noted for being the film that launched the screen career of Sessue Hayakawa (he would also star in the 1937 French-language sound remake).   His co-star is Fannie Ward, who was married to Jack Dean, who plays her husband in the film (talk about a small world).

The plot casts Ward’s character as a socialite who embezzles a considerable sum from a charity (to buy fancy things for herself) and to avoid discovery she turns to a wealthy ivory merchant (Hayakawa) to bail her out.   It does not end well for all involved. 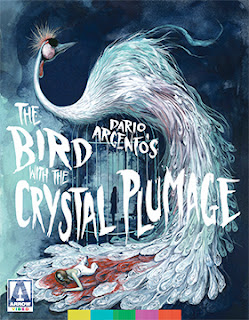 Arrow Video, with domestic sales and distribution expertise provided by MVD Entertainment Group, has tabbed June 20 as the street date for a new 4K restoration of iconic filmmaker Dario Argento’s 1970 giallo/horror gem, The Bird with the Crystal Plumage.

Presented in this Blu-ray/DVD Combo Pack are both the original Italian language track (with English subtitles) and the English-dubbed domestic theatrical release version.

Bonus features for this twisted murder mystery — where even the first-hand witness (played by Tony Musante) might not have seen what he thought he saw — includes a newly-prepared commentary track featuring giallo-genre expert, Troy Howarth, the author of “So Deadly, So Perverse: 50 Years of Italian Giallo Films.”

Other bonus nuggets include a new video session with writer/director Dario Argento, a newly-minted video session actor Gildo Di Marco, an analysis of the film by critic Kat Ellinger (editor in chief of Diabolique Magazine) and the featurette titled “The Power of Perception.” 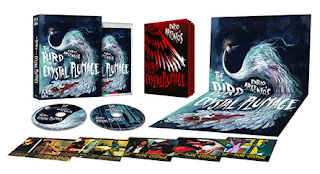 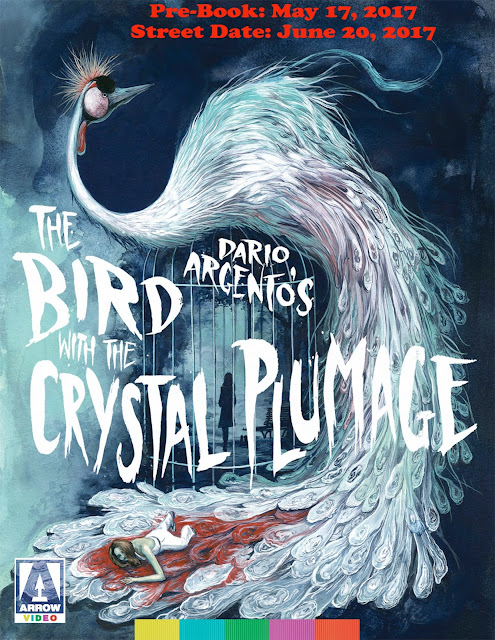 Posted by DVD & Blu-ray Release Report at 7:50 AM No comments:

Email ThisBlogThis!Share to TwitterShare to FacebookShare to Pinterest
Labels: Arrow Video's 4K Restoration Of Dario Argento's The Bird With The Crystal Plumage Will Be Ready On June 20, DVD and Blu-ray Release Report 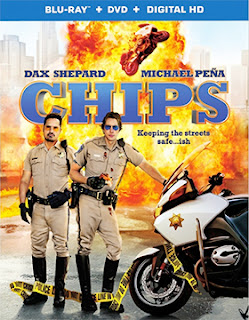 Warner Bros. Home Entertainment will be taking home entertainment audience for a fun spin on the streets of Los Angeles on June 27 with the DVD and Blu-ray/DVD Combo Pack debut of actor/writer/director Dax Shepard’s CHiPs.

The ARR comes in at 95 days and box office receipts currently stand at $18.4 million.

It’s bad news for the California Highway Patrol as someone on the inside is knocking off armored cars in Southern California and the FBI needs to get an undercover agent in there to crack the case.   Selected for the job is none other than Francis Llewellyn “Ponch’ Poncherello (played by Michael Peña — The Martian, End of Watch, World Trade Center, etc.), who is “transferred” to the CHP to be on inside — perhaps as something of a punishment for shooting his own partner in a hostage situation (but that’s another story). 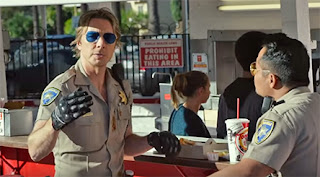 Meanwhile, top motocross pro Jon Baker (played by Shepard — as Crosby on the Parenthood, plus writer/director and co-starring with his wife, Kristen Bell, in the 2012 comedy Hit & Run) has been forced into retirement — one too many bone-breaking accidents — and has managed to land a job at the CHP as a rookie.   He needs the money.

Now Baker can ride (perhaps not the way the CHP would like him to), he’s none too bright and his trophy bride (played by Kristen Bell) has kicked him to the curb because all of that sponsorship money has gone south, which makes him the perfect street partner for Ponch!

These two — Ponch and Baker — are not who you would like to respond to any accident you might be involved in.   Ponch’s focus is elsewhere and Baker is basically a man-child with no focus at all.   And yet, somehow, they must solve the mystery of who within the department is staging the armored car heists.   That’s going to be quite a challenge (on many fronts), especially since their standard issued rides can’t keep up with the bandits (that’s where Baker will actually shine)!

The only bonus goodie common to both SKUs is the featurette titled “This is Not Your Dad’s   Exclusive to the Blu-ray/DVD Combo Pack edition are commentary by Dax Shepard, deleted scenes (which were likely culled from the film to avoid an NC-17 rating … even at that CHiPs can be pretty crude in places as Shepard’s character seems to know no bounds) and two additional featurettes — “Practical Pursuit” and “Ducati: The Perfect Bike.”
CHiPs.” 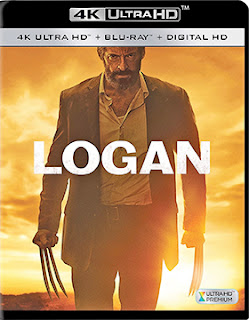 20th Century-Fox Home Entertainment confirmed this past week what everyone following such things pretty much knew since early April (the pre-book was back on Apr. 19) that director James Mangold’s Logan — starring Hugh Jackman — would be retail-ready on May 23 as a three-SKU home entertainment release.

The ARR is a quick-to-market 81 days and ticket sales for this latest entry in the X-Men film franchise series currently stand at a solid $224.5 million.

Planned for release are a stand-alone DVD edition, a Blu-ray/DVD Combo Pack and a 4K Ultra HD/Blu-ray Combo Pack presentation.

As to bonus goodies, producer/writer/director James Mangold (The Wolverine, Knight and Day, 3:10 to Yuma, Walk the Line, etc.) provides commentary, plus there is a black-and-white viewing option for the film that is referred to as “Logan Noir,” deleted scenes (with optional commentary by Mangold) and a feature-length “making of” documentary titled “Making Logan.” 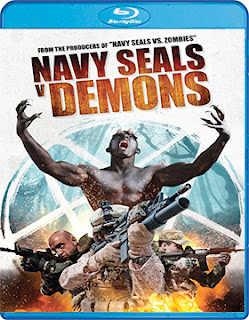 MVD Entertainment Group will be guiding the Ripped Boxers Entertainment production of director Jeff Reyes’ Navy SEALS v Demons to market as both DVD and Blu-ray product offerings on June 13.

Jack County, Texas is smack-dab in the middle of the Bible belt, but from the looks of things these days it is the Devil, and not God, who is in charge.   So who can set it right?

LT (Mikal Vega), a former Navy SEAL, has seen some hard times.   But now he has a chance to redeem himself as he is sent undercover to ferret out what is going on … it doesn’t take long before LT and his SEAL cohorts discover that hell-spawned demons are taking over.   Rape, torture and murder is the name of the game … a literal hell on earth!

LT quickly realizes that he and his SEAL team are going to need help to take down this adversary … and that help arrives from a very unlikely source!   Navy SEALS v Demons is an all-action horror thriller that delivers exactly what is promised, a titanic battle between good, the not-so-good and evil!

Posted by DVD & Blu-ray Release Report at 7:30 AM No comments: 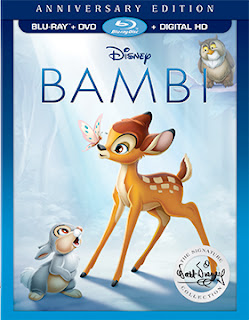 It is so hard to get a handle on what Disney is up to these days … it all seems so chaotic.   We can’t say for sure that June 6 is a train wreck waiting to happen or not, but it will be an important release date for Walt Disney Studios Home Entertainment one way or another … that much is certain.

The confusion comes from both Target and Best Buy being out early with news that their “special edition” versions of director Bill Condon’s theatrical smash, Beauty and the Beast, would be available on June 6.   They then, collectively, took that date down from their respective sites and now just list the title as a pre-order.

In the meantime, WaxWorks, a national distributor of home entertainment products, confirmed June 6 as the street for Beauty and the Beast in the latest edition of the company’s “Hot Sheet” sales solicitation bulletin — after teasing the release in a double-truck ad in the previous edition of the “Hot Sheet.”

That seems a bit rushed, but then you have to acknowledge that Disney knows what they are doing … but announcing an important anniversary edition of Bambi after the pre-book?   What’s the rush?

So it is for sure that June 6 is the street for the Bambi: Anniversary Edition (a Blu-ray/DVD Combo Pack), and as far as we know, Beauty and the Beast will arrive on the same date (but we are beginning to suspect that the early June date is being scrubbed in favor of a street date closer to Labor Day). 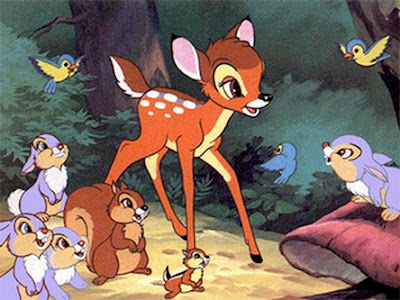 As to newly-prepared bonus goodies for the Bambi: Anniversary Edition, there are two deleted scenes — “Bambi’s Ice and Snow” and “The Grasshopper” — a pair of featurettes and the 1928 silent Oswald the Rabbit animated short release of Africa Before Dark.

There are also recycled bonus nuggets from previously released versions of Bambi and these are: a six-part “making-of” documentary titled “The Making of Bambi: A Prince is Born” and 1937 theatrical cartoon presentation of Silly Symphony: The Old Mill … among others.

Posted by DVD & Blu-ray Release Report at 7:27 AM No comments: