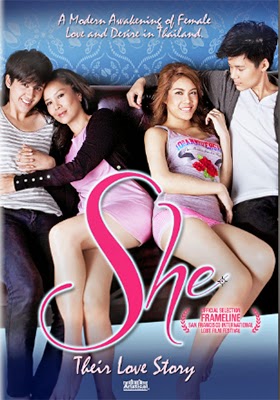 Ariztical Entertainment has announced that Thai filmmaker Sarunya Noithai’s explosive tale of love, betrayal, tragedy and heartbreak, She: Their Love Story, will be heading to the domestic DVD market place on Sept. 30.
Don’t assume anything going into this film.   The Thai film market is peppered with action films — and, quite frankly, the old chop-socky mimicry of Hong Kong-based martial arts films has long-since past.   Stories have improved, the acting has stepped-up to international standards and budgets and technical aspects are now first rate.

With that said, it was just a matter of time before domestic filmmakers would begin to explore other issues.   Several of these are touched upon here … some would have been taboo just a few short years ago.

The story revolves around sisters Bua (Penpak Sirikul) and Da (Apassaporn Saengthong), the former being a successful Bangkok-based publisher, while Da, her young sister works for her as a writer.   The catalyst for the screenplay here begins with an indiscretion on the part of Da, who becomes the subject of workplace ridicule when her former boyfriend spitefully circulates videos of them having sex.

Meanwhile, Bua has a secret that is driving her to divorce her husband … again, assume nothing!

Da, hurt and embraced, decides to write a story about women, like herself, taking comfort with sympathetic women of a somewhat different sexual persuasion.   Her piece lurches forward in starts and stops, but once she gets beyond her “cold feet,” she manages to find a relationship with a woman named Be (Kitchya Kaesuwan).

Meanwhile, the secretive Bau strikes up a professional relationship with a photographer named June (Ann Siriwan Baker) and things quickly blossom into a relationship.   But, it is not what it seems … that will be revealed in the tragic third act.

She: Their Love Story combines beautiful locations with both sensual and provocative storylines … technical aspects are all first rate.  In Thai with English subtitles.

Posted by DVD & Blu-ray Release Report at 8:05 AM No comments: 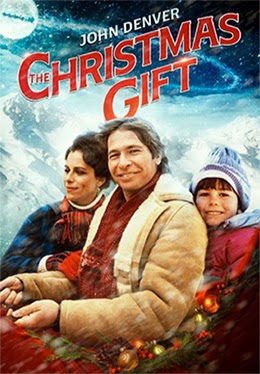 It’s beginning to look a lot like Christmas … if Paramount Home Media Distribution’s latest round of product announcements is any indication of what is just over the Labor Day horizon.

On Oct. 14 the “Diamond Anniversary” of director Michael Curtiz’s 1954 musical classic, White Christmas, starring Bing Crosby, Danny Kaye, Vera-Ellen and Rosemary Clooney, will be celebrated with newly-prepared DVD and Blu-ray product offerings.   No word just yet on bonus nuggets that will be included with these collectible SKUs.

On Nov. 4, John Denver will be featured in director Michael Pressman’s 1986 seasonal classic, The Christmas Gift and Paramount has a Jason Robards double-feature ready for DVD on the same date titled Holiday Family Classics … this includes The Thanksgiving Treasure (1973) and The House Without a Christmas Tree (1972) … both co-starring Lisa Lucas and Mildred Natwick (Best Supporting Actress nominee in 1967 for Barefoot in the Park). 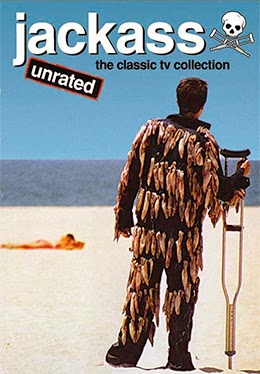 When Johnny Knoxville, Bam Margera, Jason 'Wee Man' Acuña and the rest of the gang get together they are certainly celebrating something … perhaps not Christmas.  On Oct. 14 Paramount has a four-disc collection ready for their fans to enjoy — it is titled Jackass: The Classic TV Collection – Unrated.

Lastly, documentary filmmaker Andrew Rossi’s Ivory Tower, a look at the value of a college degree versus the ever-increasing cost thereof, has been added to the Sept. 30 DVD release calendar.

The ARR is 109 days and the limited theatrical run has generated ticket sales of $99,555.

Posted by DVD & Blu-ray Release Report at 8:02 AM No comments:

The Film Detective Sets 12 For DVD On Sept. 2 Including My Man Godfrey, D.O.A. And More!!! 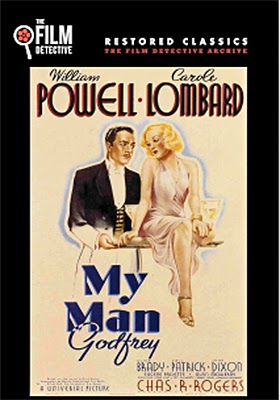 Industry veteran and film restoration expert, Phil Hopkins, revealed this past week that Sept. 2 will mark the launch of The Film Detective, a new label for both DVD and Blu-ray product offerings that boasts a 3,000-strong film library to select from.

The first wave — all priced at just $9.98 each and featuring classic packaging and closed captioning — will consist of 12 films.

On the comedy front, My Favorite Brunette (1947, with Bob Hope, Dorothy Lamour and Peter Lorre), My Man Godfrey (1936, Carole Lombard and William Powell) and Nothing Sacred (1937, also starring Carole Lombard, who is teamed this time out with Fredric March) are included in this first wave of DVD releases. 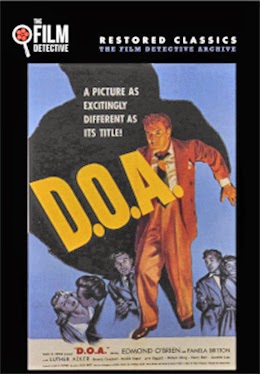 War films to select from are The Big Lift (1950, Montgomery Clift stars in the life-and-death story of the Berlin airlift) and Go For Broke (1951, Van Johnson stars in this story of the 442nd Regimental Combat Team).

Posted by DVD & Blu-ray Release Report at 7:59 AM No comments:

Email ThisBlogThis!Share to TwitterShare to FacebookShare to Pinterest
Labels: D.O.A. And More!!!, DVD and Blu-ray Release Report, The Film Detective Sets 12 For DVD On Sept. 2 Including My Man Godfrey 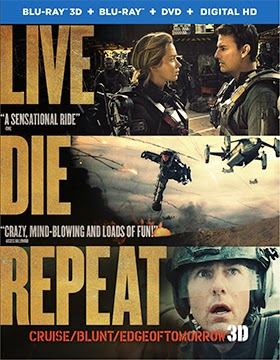 Planned for release are a DVD stand-alone edition and two Blu-ray/DVD Combo Pack SKUs — one with, and one without a 3D viewing option.

The ARR is 123 days and domestic ticket sales currently stand at $99.3 million.

An alien invasion force called the “Mimics” gets more than they bargain for when a public relations office, Major William Cage (Cruise), gets assigned to what amounts to a suicide mission for being insubordinate.   Sure enough, he lasts little more that a few minutes in combat against these alien creatures.

End of story?   An action film with Tom Cruise being killed off in the first reel?!?   How does that work? 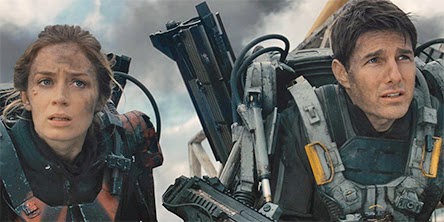 Inexplicably this neophyte combatant is caught in a time loop and with each cycle he becomes more adept at delaying what seems to the inevitable, namely, his demise.  And with each “death-loop” he becomes more-savvy on how the invasion might be stopped and the Mimics defeated.

All three buying options include the featurettes titled “Weapons of the Future” and “Creatures Not of This World.”   Exclusive to the Blu-ray editions are deleted scenes and three additional production featurettes — “Operation Downfall – Adrenaline Cut,” “Storming the Beach” and “On the Edge With Doug Liman.” 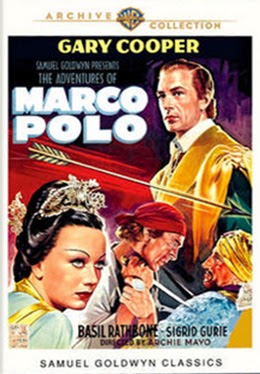 Lastly, 1938 Samuel Goldwyn production of The Adventures of Marco Polo, starring Gary Cooper as the fabled world traveler will be available once again as a DVD product offering on Aug. 26.

Posted by DVD & Blu-ray Release Report at 7:54 AM No comments: 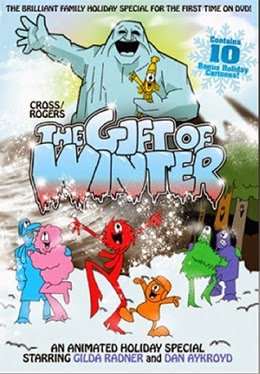 Included in the mix is the Oct. 21 DVD debut of The Gift of Winter, the 1974 animated special featuring the voices of SNL alumni Dan Aykroyd and Gilda Radner, plus Valri Bromfield (Aykroyd’ former Second City comedy partner) and Gerry Salsberg.

Included with this animated treat — which is priced at just $9.98 — are ten additional Christmas-season themed cartoons and animated shorts — “Jack Frost,” “Snow Foolin’,” “The Candlemaker,” “Santa’s Pocket Watch,” “Hector’s Hectic Life,” “The Christmas Visitor,” “A Christmas Tree,” “Rudolph, the Red-Nosed Reindeer,” “Christmas Comes But Once A Year” and “The City That Forgot About Christmas.”

Bonus features include a documentary on the making of “The Gift of Winter.” 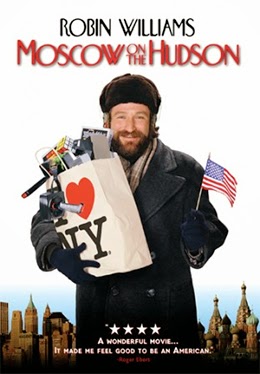 Also added to the Oct. 21 release calendar is director Paul Mazursky’s 1984 comedy starring Robin Williams, Moscow on the Hudson.   Williams was nominated for a Gold Globe for his performance … Maria Conchita Alonso is his co-star and the SRP is a fan-friendly $9.98.

For those who love Sally Field and her “high flying” late ‘60s family sitcom, Oct. 7 will see the five-disc DVD collection of The Flying Nun: The Complete First and Second Seasons landing at retailers nationwide.   The SRP is a delightful $14.98.

Also added to the release schedule in October by Mill Creek Entertainment are the Oct. 14 multi-part DVD collections of Miracles: The Power of Faith and Moonshine and the Dixie Mafia.

Lastly, Oct. 21 will see over three hours of Care Bear fun with the DVD release of Care Bears: 3 Program FUNdle! and the fitness releases of Cardio Blast and Shed 5 Fast  (they come packed under Mill Creek Entertainment’s “Best Self Fitness” promotional banner and are priced at just $9.98 each).

Email ThisBlogThis!Share to TwitterShare to FacebookShare to Pinterest
Labels: DVD and Blu-ray Release Report, The Gift Of Winter And Moscow On The Hudson (And More) Have Been Added To Mill Creek Entertainment's October Release Caledar

Blu-ray And DVD Editions Of Filmmaker James Franco's Child Of God To Be Released By Well Go USA On Oct. 28 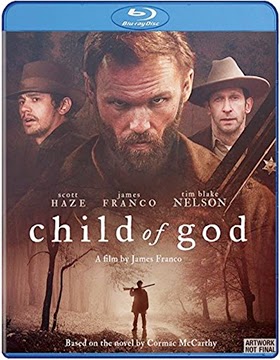 It’s interesting that Franco choose not to play the central character of McCarthy’s anti-societal tale, instead Franco recruited Scott Haze (he had a small role in Franco’s As I Lay Dying) to portray the human being-to-cave dwelling protagonist of the piece.   It is the role that could very ignite his career!

It’s the 1960s, rural Tennessee and Haze has had a break with reality.   Everything that once connected him to society has been stripped away and he has arrived at a mental state that is every bit a tale of horror (and more) that you would expect from any lurid backwood’s tale of depravity.   This one is even tough for genre fans to absorb … not for the squimish!

Posted by DVD & Blu-ray Release Report at 7:42 AM No comments:

Email ThisBlogThis!Share to TwitterShare to FacebookShare to Pinterest
Labels: Blu-ray And DVD Editions Of Filmmaker James Franco's Child Of God To Be Released By Well Go USA On Oct. 28, DVD and Blu-ray Release Report 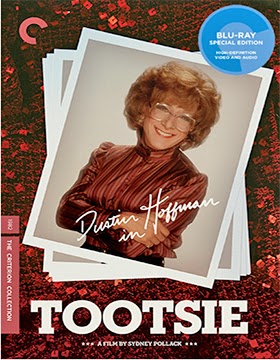 The Criterion Collection announced its November release selections this past week and right at the top of the must-have list of DVD and Blu-ray film release is director Sydney Pollack’s 1982 comedy gem starring Dustin Hoffman, Tootsie. 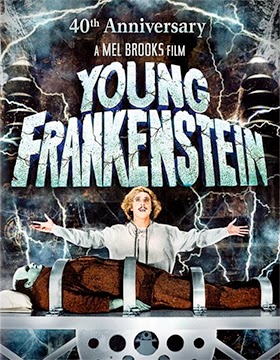 On Sept. 9 filmmaker Mel Brooks’ Young Frankenstein will celebrate its 40th Anniversary with the release of a special edition Blu-ray … and 40 lucky fans of this iconic comedy will have the chance to win an autographed photo from the set of the film from Mel Brooks. 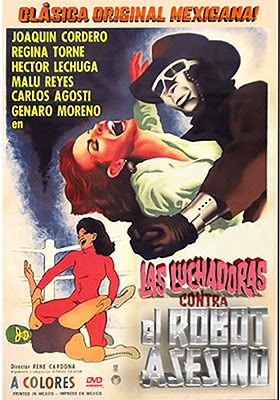 A mad scientist, Dr. Orlak (Carlos Agostí), with a penchant for kidnapping and extortion, develops a mechanical man/robot (with fiendish strength) to carry out his diabolical plans.   As it turns out, his plans are far more complex than your run-of-the-mill extortionist … this is about world domination!

The authorities seem helpless to stop his reign of terror, but there is one who will not back down and she is dressed in spandex and every bit a super hero as Batman!   She’s Gaby (Regina Torné), a female wrestler, who goes after Dr. Orlak when her uncle is murdered when he refuses to submit to his demands.

So when not battling masked adversaries in the ring, Gaby almost single-handedly takes on the evil doctor and his seemingly unstoppable robot ... this will be a battle to the death with the fate of world, no less, hanging in the balance.   Whew!

Posted by DVD & Blu-ray Release Report at 7:30 AM No comments: