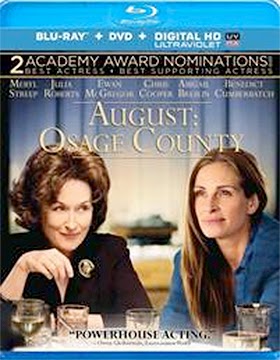 The lights of the Academy Awards show dimmed and the red carpet was rolled up and with that Anchor Bay Entertainment wasted little time in bringing to market DVD and Blu-ray/DVD Combo Pack (with UltraViolet) editions of director John Wells’ film adaptation of the Tracy Letts stageplay, August: Osage County, and DVD and Blu-ray (with UltraViolet) SKUs of director Stephen Fears’ film adaptation of Martin Sixsmith’s “The Lost Child of Philomena Lee,” which was sadly released theatrically as just Philomena.

Despite Oscar nominations for both Meryl Streep and Julia Roberts — and some decent reviews (on balance) — the film failed to generate a monster gross at the box office.  The street date will be Apr. 8, ticket sales lagged at just $37 million and the ARR works out to 102 days.  No word on bonus features, if any, at this time. 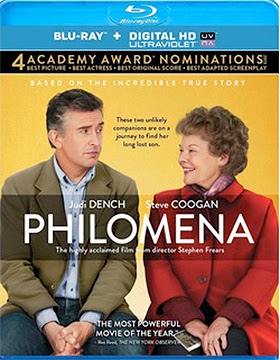 The advertising campaign for Philomena, which was nominated Best Picture, failed miserably to give theatre-goers any sort of inkling as to the emotional punch that the film, its story and actors Judi Dench (nominated Best Actress) and Steve Coogan delivered.

Philomena will be available on Apr. 15.

The ARR comes in at 144 days and the box office take, generated mainly by word-of-mouth, currently stands at $34.6 million.

Bonus features include commentary with actor/writer/producer Steven Coogan and screenwriter Jeff Pope (they shared the Oscar nomination for Best Adapted Screenplay), the featurette titled “A Conversation with Judi Dench; The Real Philomena Lee” and a Q&A session with Steve Coogan.

Posted by DVD & Blu-ray Release Report at 9:29 AM No comments:

Paramount Home Media's The Wolf Of Wall Street Has A Mar. 25 Release Date For Home Entertainment 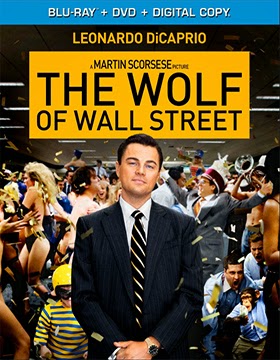 Imagine a giant tsunami wave that is destined to come crashing ashore on the evening of Mar. 2.   It is an unstoppable force that will keep that date and time.  It is the Oscar telecast.

How long can you hold back a Best Picture nominee from the home entertainment arena?   Ticket sales are still brisk at the local multiplex and you figure that you will sell X, Y or Z amount of units no matter the date — before or after the awards and winner is known to all.

That was that dilemma that Paramount Media Home Distribution with director Martin Scorsese’s The Wolf of Wall Street.   They had a relief valve — sales people or overly ambitious on-line retailers sort of leaked the street date some weeks ago, so when news finally arrived this week that Mar. 25 was release date (well beyond pre-book) it came as no surprise.

The ARR is a quick-to-market 88 days and domestic box office receipts currently stand at $112.8 million.

Planned for release are a Blu-ray/DVD Combo Pack (with UltraViolet) and a stand-alone single disc DVD SKU.

Included as the only bonus feature with the Blu-ray edition is the extended featurette titled, “The Wolf Pack.”   It features behind-the-scenes interviews with filmmaker Martin Scorsese and actors Leonardo DiCaprio and Jonah Hill (all three were nominated for Oscars).

Also getting a release date this week is writer/director Christopher Landon’s latest installment in the studio’s lucrative horror film franchise series, Paranormal Activity: The Marked Ones.   The street date is Apr. 8. 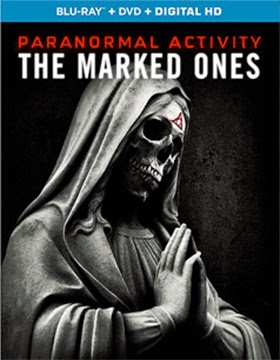 The configuration is identical to that of the aforementioned The Wolf of Wall Street — Blu-ray/DVD Combo Pack (with UltraViolet) and a stand-alone DVD SKU.

The Blu-ray SKU has two viewing options — the theatrical cut (which was R-rated) and an extended unrated cut.   There is also additional found footage.

Posted by DVD & Blu-ray Release Report at 8:18 PM No comments:

Email ThisBlogThis!Share to TwitterShare to FacebookShare to Pinterest
Labels: DVD and Blu-ray Release Report, Paramount Home Media's The Wolf Of Wall Street Has A Mar. 25 Release Date For Home Entertainment 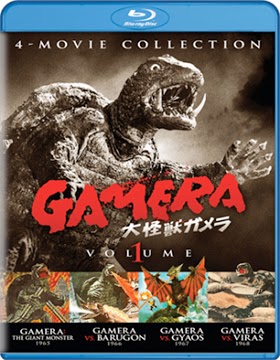 In 1965 a new Japanese creature was spawned, Gamera.   This behemoth turtle — like no turtle seen before — was capable of walking upright (Godzilla-like), had sharp teeth, monstrous tusks, belched fire and arrived at Christmas the following year on domestic theatre screens.   As with his predecessors, Godzilla and Rodan, this strange beast was a child of the atomic age.

On Apr. 29 Mill Creek Entertainment will be serving a three-SKU helping of all-things Gamera for genre fans to savor and enjoy. 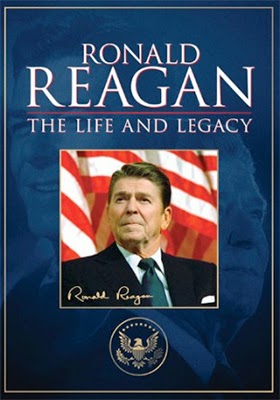 On Apr. 8, president Reagan will be featured in the double-disc collection titled Ronald Reagan: The Life and Legacy, plus two special interest DVDs are also planned for released on this date — Ghost Towns: America's Lost Worlds and Northwest Passage: The Last Frontier.

Lastly, the first glimpse at what lies ahead during the month of May was given a particularly long lead … this would be the double-disc release on May 13 of Das Boot: The Original Un-cut Mini-Series.

Posted by DVD & Blu-ray Release Report at 8:13 PM No comments: 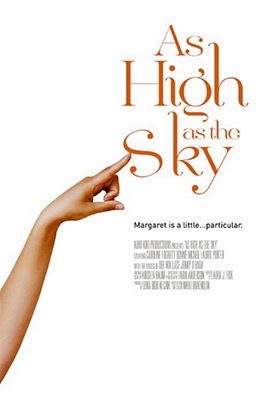 If you put Margaret (Caroline Fogarty — Waitress, Velcro Love Triangle) and Josephine (Bonnie McNeil — Sympathy for Delicious) in a room with 98 other women — all of whom are pairs of sisters — and given the task of matching them up … these two would be the pair left over at the end!

These unlikely sisters are the focus of writer/director Nikki Braendlin’s heartfelt comedy, As High as the Sky, which will be making its domestic DVD debut on May 6 from Cinema Libre.

Margaret is not a pet person.   Cats and dogs shed hair and are messy.   Her place is not friendly to that sort of thing as it is a picture-perfect postcard of tidiness.   Nothing is out of place.   No pets, and as things go, no relationships either — she just got dumped — and so despair and neatness are the daily yin and yang of her existence.   She resides in her home, but doesn’t really “live” there.

Filmmaker Nikki Braendlin would have nothing more than a one-note short film if all we had to do was to watch Margaret excessing over putting a pillow here, dusting this and that and being silently morose at the perfectly neat dining room table.   The “force” that sets all things in motion — and turns her world topsy-turvy — is the arrival of her older sister Josephine, a free-spirit with something of an unkept manner.

Oh yes, and Josephine has her ten year-old daughter Hannah (Laurel Porter) in tow.   They need a place to stay (the reasons for their arrival will become clear as the film unfolds) … which is pretty much akin to a couple of long-haired cats wandering in the front door with muddy paws.   Hannah also has the tendency for stating the obvious — the well-observed obvious.

As High as the Sky is a smart film, with excellent production values and an emotional bang that slowly slips on you.   Cinema Libre has a winner here … and with that May 6 street date they have plenty of time to beat the promotional drums.

Posted by DVD & Blu-ray Release Report at 8:09 PM No comments:

Email ThisBlogThis!Share to TwitterShare to FacebookShare to Pinterest
Labels: Cinema Libre's DVD Debut Of Director Nikki Braendlin's As High As The Sky On May 6, DVD and Blu-ray Release Report 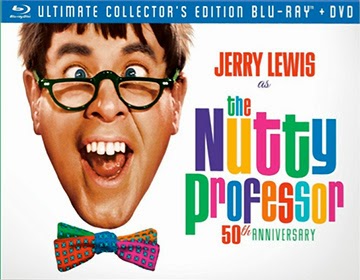 Jerry Lewis as Professor Julius Kelp turns 50 and Warner Home Video is ready to celebrate on June 3 with the release of The Nutty Professor: 50th Anniversary - Ultimate Collector's Edition.

This collection features both Blu-ray and DVD editions of actor/director/writer Jerry Lewis’ classic comedy about a loser of a chemist who changes everything with a magic invention that transforms him into a genuine lady’s man.   Stella Stevens co-stars. 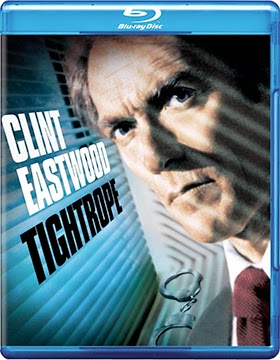 Posted by DVD & Blu-ray Release Report at 8:05 PM No comments:

Virgil Films And Entertainment's American Made Movie Debuts On DVD This Coming Apr. 15 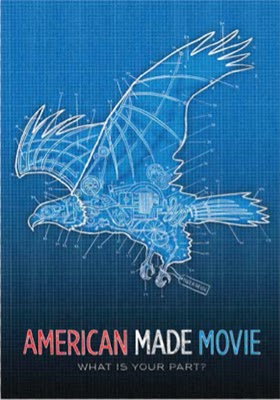 Are we a nation on its merry way to selling just cheeseburgers to one another?   If we don’t make anything, what else do we do?

That’s the question that is more or less asked in Virgil Films & Entertainment’s Apr. 15 DVD debut of documentary filmmakers Nathaniel Thomas McGill and Vincent Vittorio’s American Made Movie, which is a chilling look at the decades-long decline in domestic manufacturing capabilities and the social and economic ramifications that go with that loss.

Plenty of examples are delineated in this thought-provoking expose — from the devastation of Detriot to the success of New England’s New Balance shoe manufacturing company.    Price for the sake of price alone can be, as the American Made Movie makes the case, a slippery slope to disaster — think before you buy (vote with your dollars), it is a simple message.
To download this week's complete edition of the DVD and Blu-ray Release Report:  DVD & Blu-ray Release Report

Posted by DVD & Blu-ray Release Report at 8:00 PM No comments: 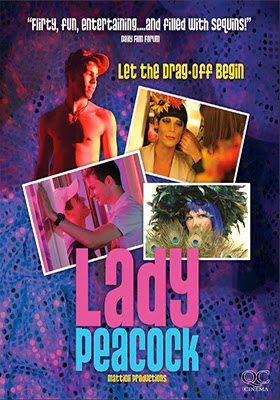 Any film that has a running floorshow with real drag queens (all shapes and sizes), including a Marilyn Monroe that looks better than the real deal, and the line “Please stay right there (pause), I’m about to give you titties,” is a film well worth a look.

Adora (Joshua Cruz — The Coffee Shop) is a seductress; a Puerto Rican bombshell … and a drag queen.   When not onstage, he’s Edwin, a fast-talking hustler who knows all the angles and he’s making the move on Devin (Kc Comeaux), a neophyte to the club scene who has arrived in Edwin’s lair with his friend Conner (Alec W. Seymour).

They came for the show, but little did Conner know when he brought Devin there on a date that Edwin would be working the crowd … and the innocent young lad has definitely caught his eye. 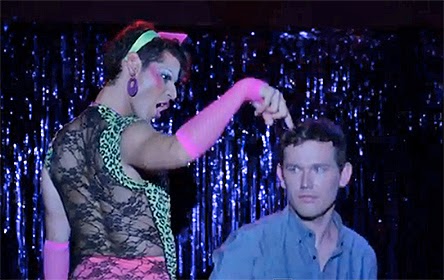 His solution to getting Devin back comes way, way out of left field.   There’s a newbie drag queen contest planned and Conner decides to fight fire with fire by entering it.   With a little help from his friends the plan is to out-bombshell Adora with a drag queen act of his own!  Hilarious!!

Posted by DVD & Blu-ray Release Report at 7:57 PM No comments: 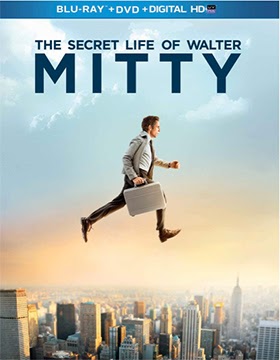 20th Century-Fox Home Entertainment will be bringing actor/director Ben Stiller’s (sort of) remake of the 1947 Danny Kaye/Virginia Mayo fantasy comedy (based on the short story by James Thurber originally published in 1939), The Secret Life of Walter Mitty, to market as DVD and Blu-ray editions on Apr. 15.

Ben Stiller stars as Mitty, with Kristen Wiig as the object of his affections — Sean Penn serves nicely as the MacGuffin for Mitty’s adventures.   Bonus goodies include a behind-the-scenes featurette … exclusive to the Blu-ray SKU are deleted scenes, extended scenes and the José González music video, “Stay Alive.”

Posted by DVD & Blu-ray Release Report at 7:53 PM No comments: