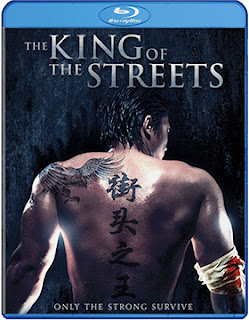 Step right up folks!   The midway is hot with attractions!

That’s the carnival-like atmosphere that Well Go U.S.A. has planned for the month of August.  Every single street-date Tuesday during the month (all four of them) are booked with new Blu-ray and DVD releases.

First up is the Aug. 6 DVD and Blu-ray debut of the all-action mixed martial arts thriller, The King of the Streets (in Mandarin, with English subtitles).

This is “old school” chop-socky action as newcomer Yue Song (who also co-directed and is a real-life MMA fighter) plays the roll of street punk Feng, who is an undisciplined, unschooled brawler who accidently kills an opponent as a teenager and served an eight-year prison jolt.

Up next and streeting on Aug. 13 is lavish period piece (Qing Dynasty) from filmmaker Andrew Lau (aka: Andrew Lau Wai-Keung), The Guillotines (also in Mandarin with English subtitles, plus Well Go U.S.A. has included an English dubbed version as well). 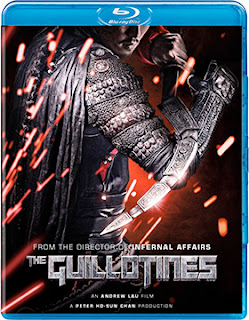 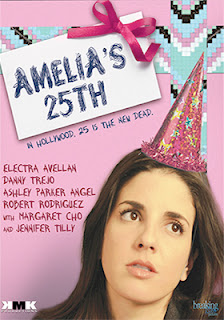 Breaking Glass Pictures announced this past week that Aug. 6 will be the DVD debut date for director Martín Yernazian’s romantic comedy, Amelia’s 25th.

You never know what the day will bring, but for Amelia (Electra Avellan — Machete, The Black Waters of Echo's Pond), a struggling actress in Los Angeles — a city full of struggling thespians — the day of her 25th birthday proves to be one that she will never forget.

We follow her through the course of one day as her path crosses the full gamut of tinsel town denizens — sex shop entrepreneurs, casting directors, a cross-dressing neighbor, a psychic, and more — as she looks for an acting gig to pay the rent.   So of like Dorothy in Oz … what an adventure!  What a birthday!!

Posted by DVD & Blu-ray Release Report at 7:54 AM No comments:

June 4 For DVD And Blu-ray Editions Of The Doobie Brothers: Live at Wolf Trap 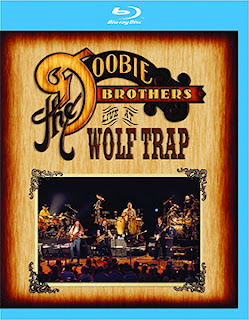 Heading to DVD and Blu-ray from Eagle Rock Entertainment on June 4 is The Doobie Brothers: Live at Wolf Trap.  Eagle Rock is reissuing the DVD edition and making it available for the first time on Blu-ray.

Bonus goodies include three bonus tracks — “Dangerous,” “Takin’ it to the Streets” and “Without You” — outtakes, “Doobie-aoke” and a pair of “Back Stage Pass” featurettes — “The Dropped Pick” and “The Family.”

Posted by DVD & Blu-ray Release Report at 7:51 AM No comments:

Email ThisBlogThis!Share to TwitterShare to FacebookShare to Pinterest
Labels: June 4 For DVD And Blu-ray Editions Of The Doobie Brothers: Live at Wolf Trap, Ralph Tribbey 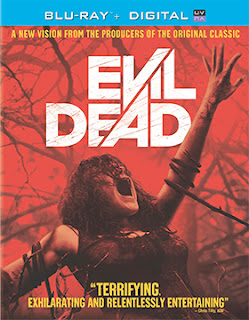 If Sam Raimi and Bruce Campbell are on board with producer credits, then it must be OK for a remake of Raimi’s 1981 horror classic — starring Bruce Campbell, of course — Evil Dead.   Sony Pictures Home Entertainment has tabbed July 16 for director Fede Alvarez’s update (not half bad as remakes go).

The ARR for DVD and Blu-ray editions is 102 days and the box office take was $54.1 million.

Bonus features include a trio of production featurettes … exclusive to the Blu-ray SKU is commentary from Alvarez, who is joined by actors Jane Levy, Lou Taylor Pucci and Jessica Lucas, plus screenwriter Rodo Sayagues.

Posted by DVD & Blu-ray Release Report at 7:44 AM No comments:

Midnight Releasing's Beast: A Monster Among Men To Be Released On DVD This Coming Aug. 20 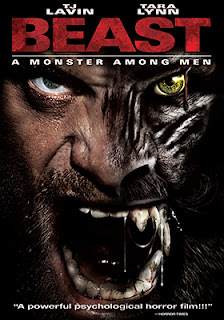 Val Lewton taught filmmakers back in the 1940s that you didn’t have to show the monster right away to make an effective horror film.  It appears that first time filmmaker Mike Lenzini has pulled a page — and a trick or two — from Lewton’s playbook with his creature feature, Beast: A Monster Among Men.

Midnight Releasing has tabbed Aug. 20 as the DVD debut date for this chiller about five friends who ignore warnings about campers going missing in the Six Rivers National Forest (filmed in around Duck Creek, Utah) and head off into the wilderness for a weekend of relaxation.

During the course of the night one by one they go missing until only two remain — can they trust each other, or is there something else lurking in the woods?

Email ThisBlogThis!Share to TwitterShare to FacebookShare to Pinterest
Labels: DVD and Blu-ray Release Report, Midnight Releasing's Beast: A Monster Among Men To Be Released On DVD This Coming Aug. 20 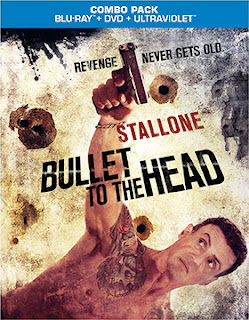 This pulp fiction adaptation of Alexis Nolent's graphic novel follows the unlikely alliance of mob hitman James Bonomo (Stallone) and D.C. detective Taylor Kwon (Sung Kang — best known to domestic audiences as Han in the Fast and Furious film series) as they join forces in New Orleans to take down those who have betrayed them.  All action … non stop!

Bonus features include the featurette titled “Bullet to the Head: Mayhem Inc.”

Email ThisBlogThis!Share to TwitterShare to FacebookShare to Pinterest
Labels: Bullet To The Head From Warner Home Video On July 16 As Blu-ray /DVD Combo Pack, DVD and Blu-ray Release Report 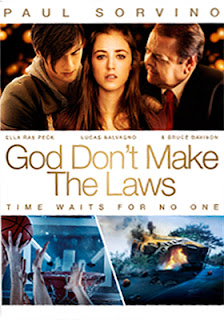 For 34 years nothing has changed in the seemingly peaceful hamlet of Rockville, Ohio.  No one has aged a day.  No one has died.   No one has gotten sick.  It is a perfect picture of a picture perfect town.

That’s the premise of Green Apple Entertainment’s July 16 DVD release of writer/director David Sabbath’s God Don’t Make the Laws.   But like any stopped clock, with the inner mechanisms wound way too tight, what may seem peaceful on the surface could come apart at any moment.   A Twilight Zone episode on steroids!

The catalyst for change occurs when a mysterious teen named Hawk Kodiak (Lucas Salvagno) arrives in town.   Everyone connected to the past (including the likes of screen veterans Paul Sorvino and Bruce Davison) — an event that happened in 1977 — begin to talk about what his arrival might foretell — an enigma; a mystery to solved for the better … for the worse.

Virgil Films Has Tabbed Aug. 13 As The DVD Debut Date For The Deep 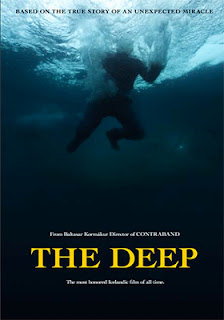 It is not often that Iceland has an official entry for Oscar consideration, but this past year writer/director Baltasar Kormákur’s The Deep was such a film.

This tightly wound drama tells the true story of Gulli (Ólafur Darri Ólafsson — 101 Reykjavík, Beowulf & Grendel, etc.), a hulking fisherman who miraculously survived the sinking of the fishing boat he was a crewmember of while trolling off the coast of Iceland.
Virgil Films & Entertainment has tabbed Aug. 13 as the domestic DVD release date for this award-winning film.

It’s 1984, the nets of their fishing boat snag and quickly sink the small vessel.   The Westman Islands off the southern coast of Iceland were visible in the distance, but the waters of the North Atlantic were frigid and his boatmates quickly perished, but somehow Gulli was able to find the strength to eventually reach shore.

To keep the action moving, Kormákur cuts between Gulli bobbing up and down in the cold blue water and the dreams/visions he has of his life, family, friends as he drifts in and out of consciousness.   It is quite effective.

The aftermath of his survival brings both celebration and questions … a bittersweet tale seems to divide the tightly knit fishing community.   Some look for miracles.   Some question, “why you?”

The Deep is presented in Icelandic with English subtitles.

Posted by DVD & Blu-ray Release Report at 7:03 AM No comments:

Email ThisBlogThis!Share to TwitterShare to FacebookShare to Pinterest
Labels: DVD and Blu-ray Release Report, Films in Icelandic, Virgil Films Has Tabbed Aug. 13 As The DVD Debut Date For The Deep

Elementary: The First Season On DVD From Paramount Home Media On Aug. 27 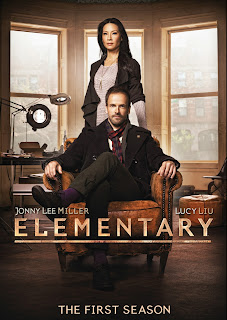 Paramount Home Media Distribution has 24 Sherlock Holmes mysteries planned for a DVD rollout (a six-disc affair) on Aug. 27.   What?  How can this be?  New cases featuring the master detective and, of course, his sidekick Dr. Watson?? 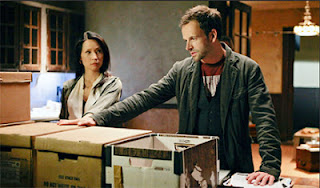 The game is afoot with bonus features that include newly-minted cast and crew interviews, a gag reel and deleted scenes.

Also on the TV-on-DVD release front in August from Paramount are three new editions of popular, well-tested series — all six-disc sets and all streeting on Aug. 20.   These are: The Good Wife: The Fourth Season, NCIS Los Angeles: The Fourth Season and NCIS: Naval Criminal Investigation Service - Season Ten.