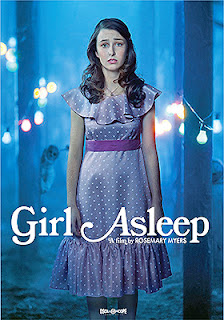 From Down Under comes one of the pure sleeper films of the year.   This would be Aussie director Rosemary Myers’ award-winning film adaptation of the Matthew Whittet’s stage play, Girl Asleep, which will be making its domestic home entertainment debut on Feb. 7 courtesy of Oscilloscope Laboratories as both DVD and Blu-ray product offerings.

The film arrives with an ARR of 137 days and the limited art house run generated ticket sales of $60,289.

This is a one-of-a-kind film adventure.   Girl Asleep is a rare gem and trying to categorize it terms of other films in order to give it context is damn difficult.   In terms of Aussie films, it is like combining the near surreal world of Muriel Heslop’s family life in Muriel’s Wedding (ah, the lovely town of Porpoise Spit) with John Hughes’ Sixteen Candles and then tossing in a dash of Alice in Wonderland.    And even that mish-mash comes up short.

It’s Adelaide, Australia, the 1970s and Greta (Bethany Whitmore — as the young Jaden in the mini-series, Starter Wife) is about to turn 15 and has just started high school as the film opens.   The students wear garish uniforms — sort of a unisex look of burgundy red shorts and bright yellow short-sleeve shirts.   That could be your first tip that you are entering more than just a different world. 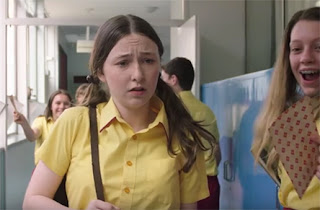 Within minutes of her arrival she is befriended by the awkward and frizzy-haired Elliott (Harrison Feldman) and accosted by the Aussie version of “mean girls” — the bully Jade (Maiah Stewardson) and her twin enforcers, Saph and Amber (played by twins Fiona and Grace Dawson).

At home it’s the “Addams Family,” with dad (played by none other than the play’s author Matthew Whittet), mom, sister and her sister’s boyfriend being more than just a bit odd.  Indeed, it’s like a celebration of eccentric behavior, which more than naturally leads to “let’s throw Greta a birthday party … and invite all the strange kids from her new school.”

It’s a “Rocky Horror” birthday party like none other, with chorus lines and singing and at some point Greta just wanders off to her room and enters an alternate world of reality! 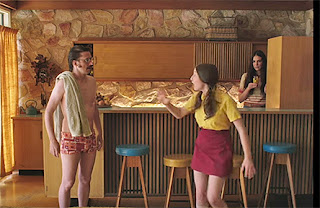 Girl Asleep is chock full of visual metaphors and child-to-adult symbolisms (leaving the innocence of childhood behind, etc.) and certainly the third act is over-the-top Felliniesque in its telling, which is carried off perfectly by both the cast, especially the wide-eyed Greta, and filmmakers Rosemary Myers and Matthew Whittet.   Girl Asleep is a MUST for the New Year!!!

Bonus goodies include the featurette “Behind the Scenes of Girl Asleep,” a video session with director Rosemary Myers titled “Making Teenage Drama” and a short film titled Pickle (directed by Amy Nicholson and was included as the opening companion during the domestic theatrical run of Girl Asleep). 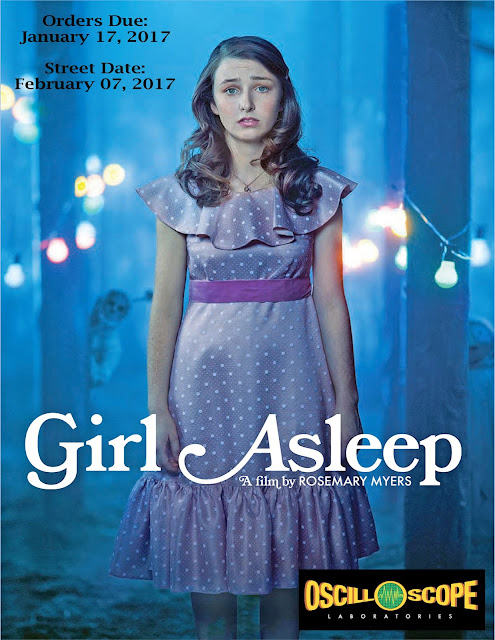 Vinegar Syndrome To Open Its 2017 Blu-ray and DVD Film Restoration Campaign With A Five Title Selection On Jan. 31 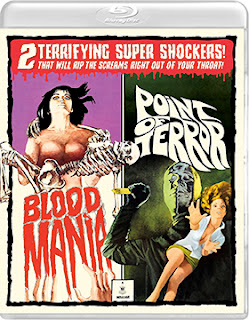 Both Blood Mania and Point of Terror featured in the double-bill SKU are new 2K restorations from their original camera negatives, while Don’t Answer the Phone is a 4K restoration from the recently discovered 35mm original negative.

Director Robert Vincent O’Neill’s 1970 Halloween-season theatrical release of Blood Mania was something of a surprise for indie distributor Crown International as it was able to successfully “mix genres” and attract not only the targeted horror crowd, but it also pulled in those drawn to the sexploitation and “mystery” aspects of film as well.

Teamed with Blood Mania is director Alex Nicol’s 1971 film release of Point of Terror … the connection for this double-bill promotion from Vinegar Syndrome is that both films were written and starred Peter Carpenter, who gained something of a cult status with these two and then he died after the completion of Point of Terror from pneumonia.   Very sad and way too young! 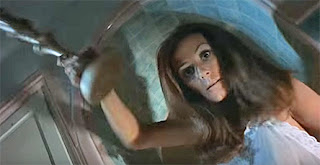 Both films are mixed genre tales, with blackmail, murder and the requisite sexual interludes common to both.   They were perfect for Crown International, which specialized in sexploitation, action and horror/suspense films during 1970s.

Bonus features include a commentary option for Blood Mania featuring director Robert Vincent O’Neill and actresses Leslie Simms (as “Nurse Turner”) and Vicki Peters (as Gail, Victoria’s murderess sister) and there are video sessions with both O’Neill and Simms.

The Blu-ray/DVD Combo Pack release of Don’t Answer the Phone should be a must for fans with this new 4K transfer. 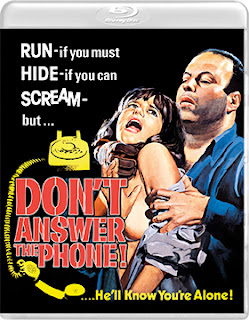 Kirk (Nicholas Worth — Swamp Thing, City Heat, Dark Man, etc.) is one nasty work of art.   A skilled Vietnam vet with a seemingly unstoppable lust for killing beauties that he photographs by day (hell of a day job) and slaughters them by night … he’s one sick puppy who has taken an extra special interest in a radio talk show psychiatrist named Lindsay (Flo Lawrence (aka: Flo Garrish) — Schizoid, The Naked Cage, The Lords of Salem).

Bonus features include commentary from Robert Hammer and vintage featurettes with the late Nicholas Worth — “Answering the Phone” and “For What It’s Worth.”

Posted by DVD & Blu-ray Release Report at 5:27 PM No comments:

Email ThisBlogThis!Share to TwitterShare to FacebookShare to Pinterest
Labels: DVD and Blu-ray Release Report, Vinegar Syndrome To Open Its 2017 Blu-ray and DVD Film Restoration Campaign With A Five Title Selection On Jan. 31 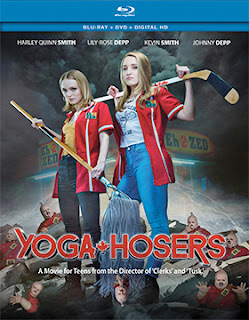 Colleen and Colleen (played by Harley Quinn Smith and Lily-Rose Depp) are vacuous Canadian teens who work at Eh-2-Zed (think: 7-11), but spend most of their time texting and studying yoga.  As hard as it might be to imagine, Colleen and Colleen will become the heroes of all of Canada as they battle Satanists, a mad Nazi scientist — along with his army of living Bratwurst soldiers (Bratzies) — and a zombie hockey goaltender in an underground bunker located beneath the convenience store!

Kevin Smith has fun — family fun at that, since Harley Quinn Smith is his daughter — with this comedy horror spoof.   As he combines the elements of Tusks (the Colleens had a bit part in this 2014 horror comedy) and his vintage cult comedy Clerks … he also gets an A-list actor to star in this send-up as Johnny Depp is Lily-Rose’s father (all in the family to be sure!). 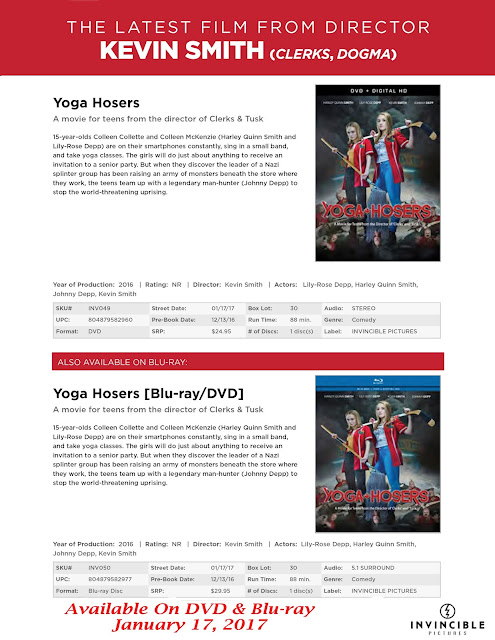 Posted by DVD & Blu-ray Release Report at 5:23 PM No comments: 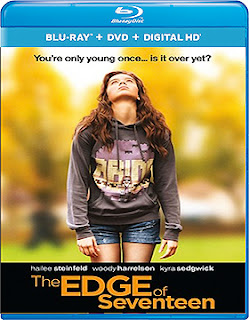 Universal Pictures Home Entertainment will be delivering both DVD and Blu-ray/DVD Combo Pack editions of the STX Entertainment production of writer/director Kelly Fremon Craig's The Edge of Seventeen on Valentine’s Day.

The ARR for that Feb. 14 street date is a fast-to-market 88 days and ticket sales from the film’s mid-November launch were a disappointing $13.9 million.

Hands down, The Edge of Seventeen is the most over-looked comedy of the year.   This coming-of-age tale about the relationship between sister and brother — Nadine (Hailee Steinfeld — True Grit, Ender’s Game, Pitch Perfect 2, etc.) and her brother Darian (Blake Jenner — Everybody Wants Some!!) — is both laugh-out-loud funny and touching at the same time.   Why it didn’t find a larger audience that first weekend remains something of a mystery. 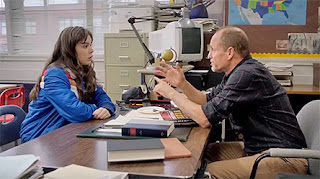 With that said, the weekly box office results since the disastrous opening weekend seem to suggest that there is some “word of mouth” buzz finally starting to attract a steady flow of theatre goers — that will, sadly, abruptly come to an end when Rogue One: A Star Wars Story opens … along with the rest of the Christmas films (screens will disappear).   That’s likely the reason that Universal has tabbed Feb. 14 as the release date at this point in time.

Hailee Steinfeld is nothing short of sensational as the angst-driven teen in this comedy that blends the best of the John Hughes’s 1980’s teen comedies — Sixteen Candles, The Breakfast Club, etc. — with more contemporary tones (think: Easy A).

Perhaps it was the way the trailer was cut, with extended scenes (very funny to be sure) with her and Woody Harrelson, that made the film seem like a dumb-kid comedy, but there’s a whole lot more going on here and that makes The Edge of Seventeen well worth a look when it arrives in the home entertainment market place on Valentine’s Day.

Bonus features a gag reel and a round table video session. 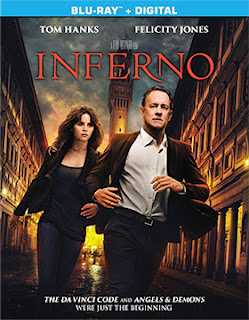 The ARR is a zippy 88 days and domestic box office receipts currently stand right at $34 million.

Planned for release are both stand-alone DVD and Blu-ray editions as well as a 4K Ultra HD/Blu-ray Combo Pack.   Bonus goodies include deleted and extended scenes, plus six production featurettes — “Ron Howard: A Director’s Journal,” “A Look at Langdon,” “The Billionaire Villain: Bertrand Zobrist,” “This is Sienna Brooks,” “Inferno Around the World” and “Visions of Hell.”
Posted by DVD & Blu-ray Release Report at 5:12 PM No comments: 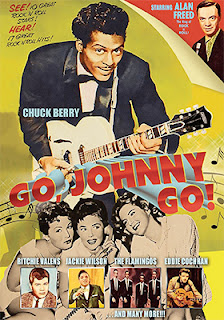 It will be a rocking good time this Christmas as The Sprocket Vault announced this week that director Paul Landres’ tribute to legendary Rock ‘N Roll promoter Alan Freed, Go, Johnny, Go!, has been remastered and restored and is now available on DVD.

Theatrical concert films in the 1950s were popular, but American Bandstand and TV household penetration had finally reached critical mass, so a new “hook” was needed … Go, Johnny, Go! uses a dramatic story of a talent search to basically string a series of filmed concert performances together and it worked.

Especially poignant is Ritchie Valens appearance, he had died in the plane crash earlier in the year with Buddy Holly and The Big Bopper.

IMDFilms Distribution Targets Jan. 17 For The DVD Debut Of Writer/Director Shawn Justice's Faith-Based Out Of Darkness 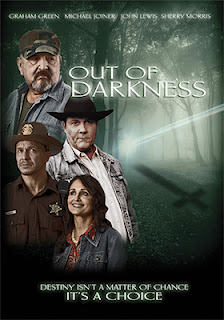 IMDFilms Distribution, with sales and distribution expertise provided by MVD Entertainment Group, will be bringing writer/director Shawn Justice’s faith based drama, Out of Darkness, to the DVD market place on Jan. 17.

Indie filmmaker Shawn Justice utilizes to good effect his familiarity with the rugged forest terrain on the outskirts of Portland, Oregon for this symbolically-laced story of a young man named Eli (Adam Elliott Davis), who has returned from a tour of duty and has now lost his way.

He has rejected a calling that has haunted him since his teens, fights with his father to the point of being fired from his job and then turns on his girlfriend (they have a daughter together).  This day of anger is topped off with a round of drinks at the local roadhouse. 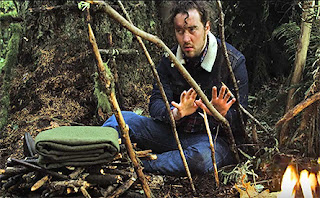 Can it get any worse?   Certainly, his anger controls him — the early scenes really establish him as something of an ass; rude; out of control — and the rage and alcohol on this particular day lead him to a lonely highway where he loses control of his pickup and totals it.   Lost in the woods, he has a series of encounters, including with a forest ranger (John Lewis) and a man known simply at Gabe (Graham Greene).   Are these people even real?

Lost, hurt and alone, each has a “vision” for him and his task is to sort out who is trying to help him and who is seeking to lead him astray; a battle between good and evil literally plays out in this wilderness with Eli as the “everyman” who must find the true path; God’s path. 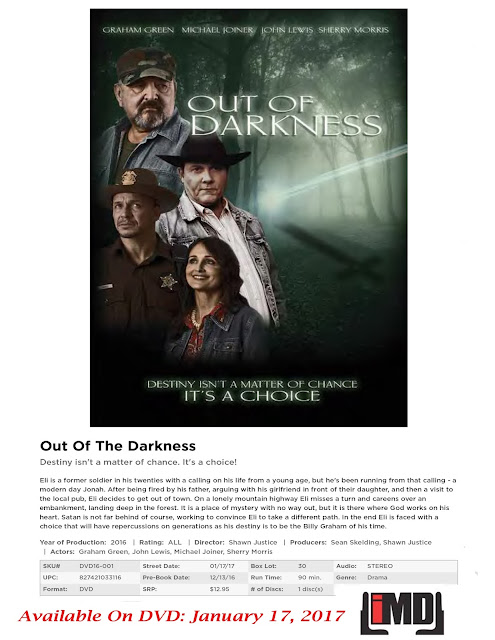 Posted by DVD & Blu-ray Release Report at 5:08 PM No comments: