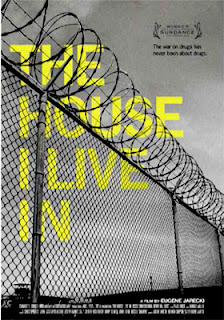 The ARR is 270 days and the box office take for this theatrically-released documentary on the “war on drugs” was a nice $210,752.

Jarecki points out that after 40 years and 45 million arrests since President Nixon declared a state of war existed with illicit drug trafficking little has changed … the war rages on.   Perhaps, he argues, the time has come to rethink the problem.

Posted by DVD & Blu-ray Release Report at 8:40 AM No comments:

Email ThisBlogThis!Share to TwitterShare to FacebookShare to Pinterest
Labels: DVD and Blu-ray Release Report, Virgil Films And Entertainment's The House I Live In Arrives On DVD On July 2 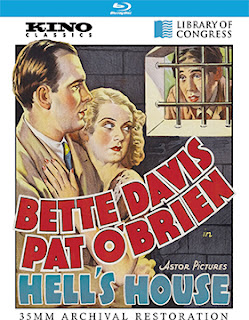 Kino Lorber has place both DVD and Blu-ray editions of 35MM film restorations (Library of Congress source material) of two of screen icon Bette Davis’ early works for delivery to collectors on June 18.

Posted by DVD & Blu-ray Release Report at 8:37 AM No comments: 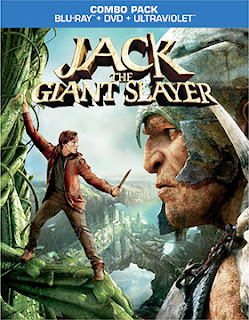 June 18 is the street date for director Bryan Singer’s CGI-laced take on the old English fairy tale about a boy, a beanstalk and a gaint.   “Fee-fi-fo-fum” has turned into a chorus as there are giants aplenty in Warner Home Video’s three-SKU home entertainment product launch of Jack the Giant Slayer.

The ARR is 109 days and the domestic box office haul currently stands right at $63 million.
The “golden eggs” being served up are two Blu-ray/DVD Combo Pack editions — one with a 3D/2D viewing option and the other as 2D only — and there is also a DVD stand alone edition.   All three feature UltraViolet.

Jack (Nicholas Hoult — Clash of the Titans, Warm Bodies, X-Men: First Class, etc.) is no mere boy and the hen that lays the golden eggs has been transformed (a literary license) into a beautiful princess named Isabelle (Eleanor Tomlinson — Alice in Wonderland). 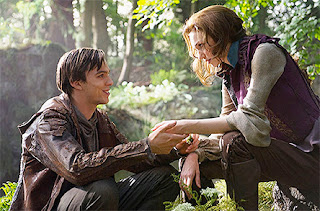 Other than that, it’s pretty much the same story, only on steroids.  Lots of giants who love to dine on humans with glee (with “relish,” we thought, would imply other condiments as well) and are only kept at bay by a magical crown — whomever possesses it has absolute power over them.

Along for the great adventure is Ewan McGregor as Elmont, a loyal knight, while Stanley Tucci is delightfully cast as the villain of the piece, Roderick, with Bill Nighy supplying the voice for the two-headed leader of the giant hordes, Fallon.

All three SKUs include deleted scenes and a gag reel, while the Blu-ray editions feature the interactive feature, “Become a Giant Slayer.” 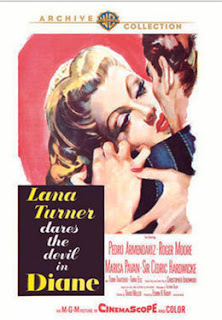 Also added to the release calendar by Warner Home Video this week is director David Miller’s 1956 film vault treasure (filmed in CinemaScope) Diane, starring Lana Turner as the legendary mistress to the king, Diane de Poitiers.   The street date is May 28.

Playing a little fast and loose with the actual historical events (that’s Hollywood), this sumptuous costume drama is nevertheless a long-awaited cinematic gem that also stars Roger Moore (as Prince Henri), Pedro Armendáriz (as his father, King Francis I) and Marisa Pavan (as Henri’s scheming “baby machine” of a wife, Catherine de Medici).

Posted by DVD & Blu-ray Release Report at 8:25 AM No comments: 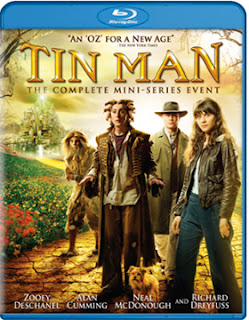 With director Sam Rami’s Oz the Great and Powerful pulling in mega bucks at the box office it is a savvy move indeed for Mill Creek Entertainment to draft behind that PR tidal wave with a some “Wizard” action of their own.

Added to the May 14 release calendar this past week are both DVD and Blu-ray editions of director Nick Willing’s epic three-part mini-series, Tin Man - The Complete Mini-Series Event.

Bonus features include a gag reel, cast and crew interviews and four featurettes, including one titled “Beyond the Yellow Brick Road: The Making of Tin Man.”

Posted by DVD & Blu-ray Release Report at 8:17 AM No comments:

Email ThisBlogThis!Share to TwitterShare to FacebookShare to Pinterest
Labels: DVD and Blu-ray Release Report, Mill Creek Entertainment Adds DVD and Blu-ray Editions of Tin Man To Its May 14 Release Package

Coffin Baby Heads To DVD From Image Entertainment On July 9 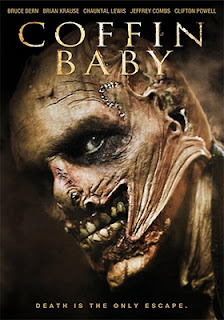 Hollywood.  A tourist hot spot.  Lots to see and do — the Hollywood Sign, Grauman's Chinese Theatre, the Capitol Records building, the old Cinerama Dome (cleverly preserved by the ArcLight Cinema), Amoeba and plenty of boutique restaurants and watering holes  … Harriet Schock even penned a memorable anthem to the street scene.   Ah yes, Hollywood!

Hollywood is also the home to Coffin Baby, a deranged serial killer and the subject of writer/director Dean Jones’ film of the same name, Coffin Baby, which is due out on DVD from Image Entertainment this coming July 9.

Back in 2004 Tobe Hooper introduced us to Coffin Baby (played then and now by stuntman/actor Christopher Doyle), a fellow that the police dubbed TBK (Toolbox Killer) … he ran up quite the body count at the Lusman Arms and is now back for an encore performance.

Since it is Hollywood, you have to figure that any good slasher/impresario worth his salt would be at his very best with an audience.  So when Samantha (Chauntal Lewis — Séance, Hypo, etc.) is kidnapped by TBK it is not as meat for his grinder, but for her to act as a witness (an audience of one if you will) to his off-the-rails rampage … a serial killing spree that will set the record for the largest crime scene in the city’s history. 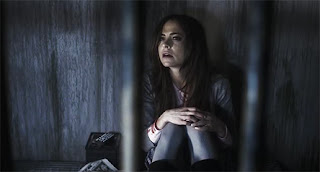 Coffin Baby is a pure genre flick targeted for those love their Saws and Hostels … it does not disappoint, even hardcore fans will have their hands clapped tightly over their eyes (a peek here and now) when Coffin Baby goes to work. 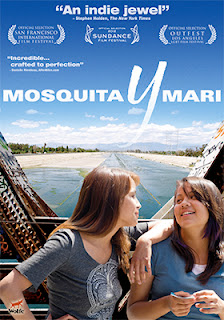 After working the film festival circuit last year — to good success, including Sundance — the film got an all too brief arthouse run which generated ticket sales of $8,614 last August and then dropped out of sight.  The ARR comes in at 305 days.

It is Wolfe Video to the rescue for the next phase — home entertainment — for this sweet, coming-of-age film that certainly accomplished its goal of getting beyond the noise of the indie film world with a micro theatrical run and festival competitions; the reviews and buzz have been solid.

Yolanda (Fenessa Pineda, in her first starring role) is a high school senior with bright prospects for college.   Her parents (played by Joaquín Garrido and Laura Patalano) have worked their butts off to insure that she has the future and opportunities that they never had.   As a result, they’ve kept a close eye on her and made sure that the traps of high school pressures haven’t bubbled to the surface. 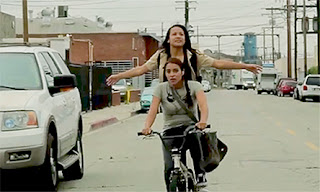 All of that seems to change when Mari (Venecia Troncoso) transfers in.  She’s “wild” and not likely to finish out the year.   Easily dismissed as just an accident waiting to happen, Yolanda finds herself strangely attractive to the newcomer and more or less takes her under her wing.

There is a sexual tension between the two, which is never fully explored, although the implications are clearly there.   Mom and dad would never approve of such a relationship, but there is a certain irony in that.  They’ve raised their daughter to excel and be a “good” person … her adoption, care and attention to Mari embraces all of those qualities that they expect of her.

This is especially true when it is revealed that Mari’s rebellious nature is actually masking some very troubling issues in her family life.   Friendship — even love and affection — are the things she needs in her life, but the deck may be stacked against Yolanda (aka: Mosquita) and Mari. 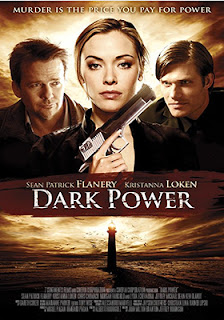 There are two ways to approach this film.   One can enjoy it as a straightforward action/mystery/thriller — as Sherlock Holmes would say, “the game’s afoot” — or you can simply sit back and enjoy the view.   The view, in this case, is Kristanna Loken of Terminator 3: Rise of the Machines (and plenty more since 2003, including Paige in the L Word cable series) — she has such an “exotic” look about her.

The set up seems innocent enough, a headline grabber, but nothing more than a murder that needs to be investigated.   That is, until the second murder occurs, and then it gets really interesting.

The mayor of a “big city” (actually filmed in and around Los Angeles, but you get an east feel from Branton’s presentation) is murdered and that would be that; local authorities would investigate this sort of crime and the local media would naturally be worked into a frenzy over the who, what and why of it.   But when his opponent in the upcoming election also turns up dead that draws the attention of the feds. 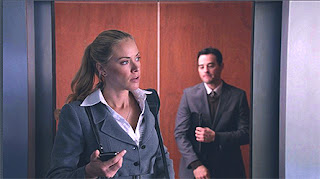 An unlikely team is sent in by the F.B.I. to investigate the multiple homicides and that should raise our suspicions, since Archer (Sean Patrick Flanery) and Driver (Loken) seem an odd choice.   Oil and water, not sugar and spice.

The second little item that gets both their attention and ours is the smarmy assistant to the dead mayor, Durant (Chris Carmack — Shark Night 3D), who is suddenly “drafted” by an all too willing city council to take over until elections can be held.   It seems a little too slick, even by big city machine standards.

When the investigation shifts into high gear, the at-odds investigators suddenly find themselves best buddies — a survival thing — as the assassinations are only the tip of a much bigger iceberg.  It is not a good feeling being “expendable.” 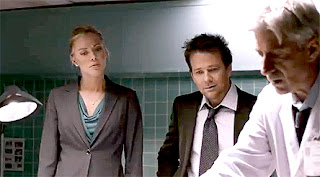 Green Apple Entertainment has latched onto a sweet summertime thriller — an evening’s entertainment, especially for those who love a good mystery/conspiracy.