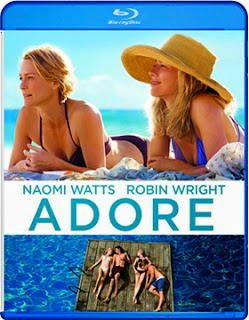 Paramount Home Media Distribution has picked up director Anne Fontaine’s film adaptation of writer Doris Lessing’s whisper-thin “cougar” seduction novel, “The Grandmothers” — retitled for its theatrical release as Adore — for delivery on DVD and Blu-ray to the domestic home entertainment market on Dec. 10.

The ARR for this Australian import teaming Naomi Watts with Robin Wright works out to just 95 days and ticket sales for the film’s limited theatrical run currently stand at $318,932.

Attractive “cougars” and long-time friends and neighbors Lil and Roz (Watts and Wright respectively) each have a son — played by Xavier Samuel as Ian, Lil’s son, and James Frecheville as Tom, Roz’s son — who are also goods friends and as the story unfolds take turns seducing the other’s mother.   Oh my! 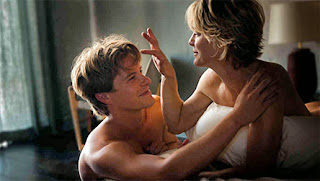 In other release news from Paramount this week, the Comedy Central production of Bill Cosby: Far From Finished will be checking in on DVD on Nov. 26.

Posted by DVD & Blu-ray Release Report at 8:34 AM No comments: 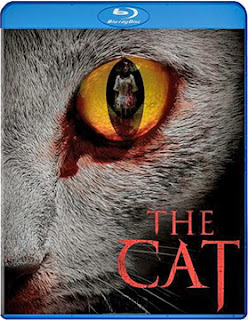 Sexy-cute and vulnerable (revealed in a backstory about her childhood) So Yeon (Park Min Young — City Hunter, High Kick!) works as at a local pet care store.  It’s pretty routine stuff.   She’s kind and gentle with the animals and is surprised by the news one day to find that the owner of Biden — a cat that was left for grooming — has tragically died in some sort of elevator mishap.

The news comes in the form of Joon Suk (Kim Dong Wook), a police officer with a long-standing attraction to So Yeon (a good excuse as any to stop by and say hello), who arrives with the bad news and suggests that she might take the cat home with her until some other arrangements can be made (setting up a possible visit to check in on poor Biden).

No sooner is the cat home with her when she is greeted with the ghostly image of a young girl.   This is enough to scare the socks off of anyone, but for the fragile Joon Suk it is an absolutely terrifying experience. 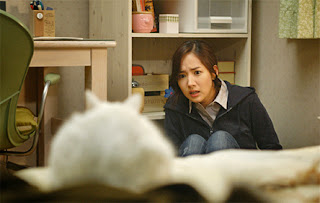 Soon after she reveals this strange “happening” to her friend, and fellow cat-lover, Bo Hee (Shin Da Eun), Bo Hee ends up dead.   The love-smitten Joon Suk no longer needs any excuses to stop by to check in So Yeon as she is now the center of his investigation into the strange deaths (which continue to mount up) that somehow all seem related to cats, a ghostly little girl ... and So Yeon. 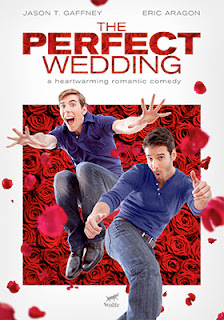 Director Scott Gabriel’s The Perfect Wedding will be available on DVD from Wolfe Video on Dec. 3.

It’s Christmas in Florida at the Fowlers, a time for fun, love and family.   But will it be?
Consider the list of characters arriving at the homestead.   First the adopted daughter, Alana (Apolonia Davalos), a young black woman raised by white parents — Richard (James Rebhorn) and Meryl (Kristine Sutherland) — who are now facing a traumatic health issue.

In tow Alana brings her white fiancé, Kirk (Brendan Griffin), with the thought of planning a June wedding.  But Kirk, after arriving at her parent’s home, suddenly announces a change in plans.

Not done yet.   Alana’s stepbrother, Paul (Eric Aragon), will also be there.  He is a recovering alcoholic and is overtly gay.   Alana also brings with her Paul’s ex-lover, Roy (Roger Stewart) — the two are good friends and she’s always felt that her brother (when he was drinking) was cruel to Roy.

Roy, not wanting Paul to think that he is a total loser, asks Alana if he can bring along his friend Gavin (Jason T. Gaffney), who he will pass off as his current boyfriend — he hasn’t been in a relationship since he parted ways with Paul (and that was two years ago). 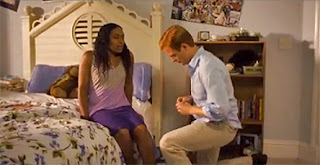 Right about now you’re thinking that this is going to be a soap opera with neck-deep suds.   You couldn’t be more wrong in that assessment … filmmaker Scott Gabriel has deftly blended together a comedy of errors and misunderstandings, coupled with just enough pathos, to give The Perfect Wedding an edge.  A winning edge!

We can tell you this much, Christmas at the Fowlers this year will be a Christmas that no one will ever forget … dad included!

Bonus nuggets include a behind-the-scenes production featurette and interviews with the cast members. 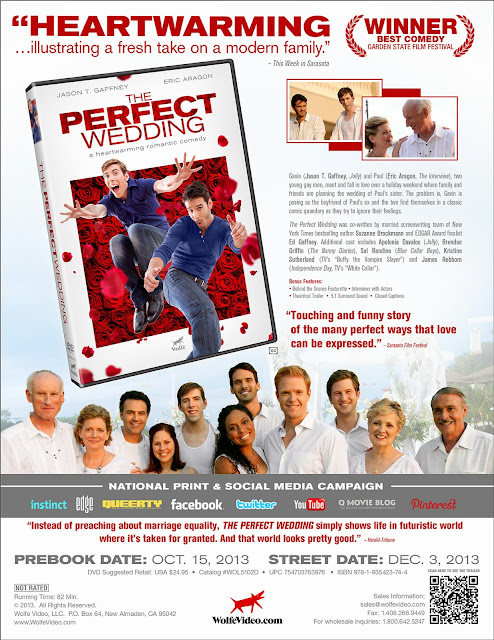 Posted by DVD & Blu-ray Release Report at 8:15 AM No comments:

Midnight Releasing's Dead Of The Nite Kicks Off 2014 Release Campaign On Jan. 7 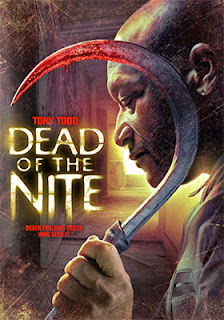 There will be more than the chill of a January winter’s day in the air on Jan. 7 as it was revealed by Midnight Releasing this past week that writer/director S. J. Evans’ supernatural thriller, Dead of the Nite, will be the company’s kickoff DVD release for 2014.

The dreaded Jericho Manor (filmed at the Craig-y-Nos Castle in Wales) is the subject of a paranormal investigation by a group of  “ghost hunters” (read that as the victim pool), who are greeted upon their arrival by a chap named Ruber, the caretaker of the notorious digs.    You know from the get-go that it cannot go well for this intrepid little group when the character of Ruber is played by none other than the Candyman himself, Tony Todd.

Locked in, with nothing but night vision equipment, the group is slaughtered one by one by a mysterious figure (Ruber, perhaps?).   Creepy effects, especially the greenish-tint of the video footage shot in the dark, make this haunted house tale a real edge-of-your-seat thriller.

But it doesn’t end there!  Sent to investigate the “scene of the crime” are detectives Jenkins (Gary Mavers — Peak Practice, Devil’s Bridge, etc.) and Anderson (Joseph Millson — Casino Royale, I Give it a Year), who try to piece together what transpired (from the “found footage”), but with Ruber lurking about — and reticent to talk about what might have happened — you begin to wonder if they are just the next victims! 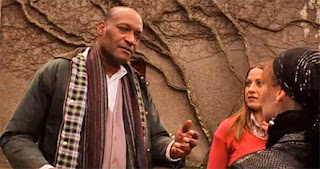 You will have to wait until the devilishly good twist-ending as Dead of the Nite delivers the goosebumps in the dark and chills up your spine right up until the closing credits.

Others is in the cast include Cicely Tennant, Paul Fox (Red Tails, Deserter), Simon Bamford (Nightbreed and as Butterball Cenobite in both Hellraiser and Hellbound: Hellraiser II), Simone Kaye and the always alluring scream queen Suzi Lorraine (aka: Kelli Summers).

Bonus features include commentary from Brit filmmaker S. J. Evans, a half dozen deleted scenes, outtakes, a behind-the-scenes production featurette, storyboard to screen comparisons and a Q & A session with Horror Talk TV.

Email ThisBlogThis!Share to TwitterShare to FacebookShare to Pinterest
Labels: DVD and Blu-ray Release Report, Midnight Releasing's Dead Of The Nite Kicks Off 2014 Release Campaign On Jan. 7

Vincent Price's The Bat Restored For The First Time In HD From The Film Chest On Nov. 12 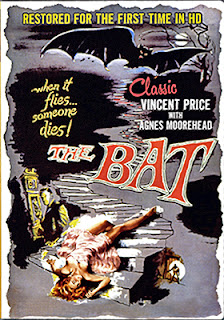 He had been around forever (beginning at the birth of film during the early silent) — as either an actor, a director or a scripter — but late in his career (1959) he teamed with Vincent Price in a reworking of the 1926 Avery Hopwood and Mary Roberts Rinehart stage play, The Bat.   The result: an iconic haunted house classic!

Word arrived this week that the Film Chest has completed a fully restored (in HD) version of The Bat from the original 35mm film elements … the DVD will be available for collector’s to own on Nov. 12.   Start counting the days! 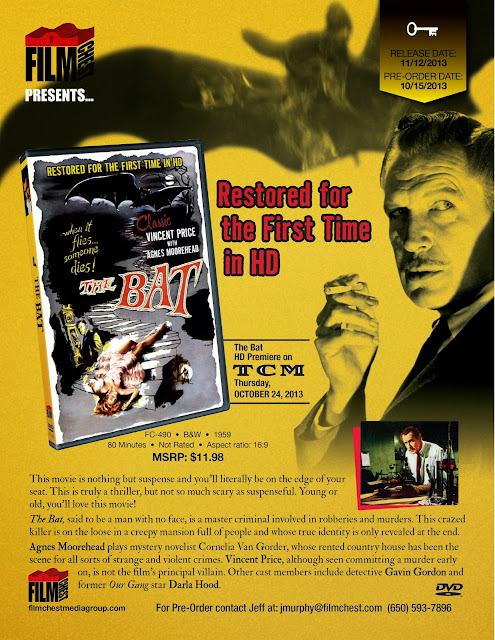 Email ThisBlogThis!Share to TwitterShare to FacebookShare to Pinterest
Labels: DVD and Blu-ray Release Report, Vincent Price's The Bat Restored For The First Time In HD From The Film Chest On Nov. 12

More Than Honey On DVD And Blu-ray From Kino-Lorber On Dec. 24 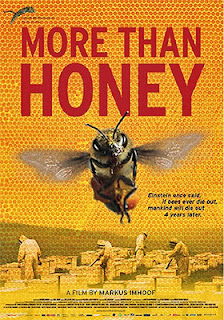 Kino Lorber will have a last minute Christmas Eve stocking-stuffer for those who love well-told tales about the wonders of nature.   On Dec. 24 look for DVD and Blu-ray editions of documentary filmmaker Markus Imhoof’s More Than Honey as it is made ready for home entertainment viewing just in time for Christmas.

This intimate look at bees — more specifically bee colonies — was four years in the making and takes the armchair traveler to the four corners of the world for its tour de force educational look at the dangers of “colony collapse” and the dire implications that an unhealthy bee population can have for mankind.

The ARR is 193 days and the arthouse theatrical run generated ticket sales of $71,497.

Posted by DVD & Blu-ray Release Report at 7:52 AM No comments:

Email ThisBlogThis!Share to TwitterShare to FacebookShare to Pinterest
Labels: DVD and Blu-ray Release Report, More Than Honey On DVD And Blu-ray From Kino-Lorber On Dec. 24 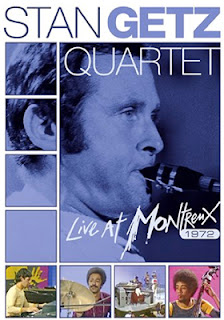 Eagle Rock Entertainment has added the DVD release of Stan Getz Quartet: Live At Montreux, 1972 to its all ready very busy Oct. 29 release slate (in place are the likes of: CeeLo Green is Loberace: Live In Vegas, Lady Antebellum: On This Winter's Night, Move Me Brightly: Celebrating Jerry Garcia's 70th Birthday and Springsteen & I).

Posted by DVD & Blu-ray Release Report at 7:49 AM No comments:

SPHE Readies The Mortal Instruments: City of Bones For The Home Entertainment Market Place For Dec. 3 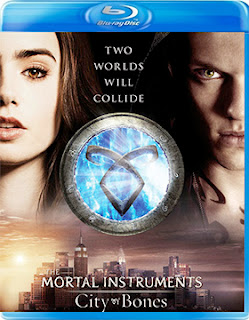 Sony Pictures Home Entertainment has picked out Dec. 3 as the home entertainment release date for director Harald Zwart’s film adaptation of Cassandra Clare’s first book in the “The Mortal Instruments” series (five thus far with a sixth announced for next year), The Mortal Instruments: City of Bones.   Planned are DVD and Blu-ray SKUs (both with UltraViolet).

With a box office haul of $31.7 million (the ARR is 102 days), it is unlikely that the studio will be able to launch a franchise series built around Clare’s teen-angst fantasy novels.   No word on bonus goodies at this time, which has been the case with Sony Pictures Home Entertainment announcements for their theatrical-to-home entertainment of late.

Update:  Sony Pictures Home Entertainment announced that bonus features include the Ariana Grande music video "Almost is Never Enough," a pair of featurettes — "Bringing Them to Life" and "Descendants of the Cup" — and deleted scenes.

Exclusive to the Blu-ray SKU is the interactive feature "Interactive Lineage Tracker" and three additional production featurettes — "Deadly Attraction," "Entering the Shadow World" and "Into the Shadows: From Book to Screen."
Posted by DVD & Blu-ray Release Report at 7:40 AM No comments: