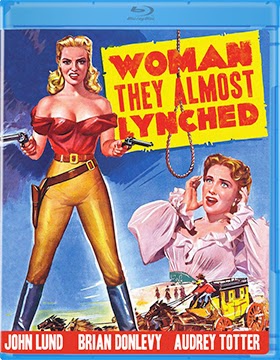 Director Allan Dwan, whose career dated from the dawn of the art of filmmaker, both as a director and technical innovator, was noted for such films as Heidi and Rebecca of Sunnybrook Farm starring child star Shirley Temple, Brewster’s Millions, Montana Belle (starring Jane Russell) and Sands of Iwo Jima, which earned John Wayne a Best Actor Oscar nomination … and more.

In 1953 he directed Audrey Totter (Lady in the Lake, The Set-Up and many more) as Kate Quantrill, wife of Charles Quantrill (Brian Donlevy)  — of Quantrill’s Raiders fame — in the luridly titled Western, Woman They Almost Lynched.   Frank and Jesse James (Ben Cooper and James Brown respectively) are also on hand … as is Joan Leslie as a “good” girl who is very much out of her league (a saloon owner).   This is one of those guilty pleasures that we are glad to see, not only on DVD, but as a Blu-ray product offering as well! Rounding out the Jan. 20 DVD and Blu-ray selections from Olive Films is Le Belle Captive is the 1983 French-language import from writer/director Alain Robbe-Grillet.

Posted by DVD & Blu-ray Release Report at 9:46 PM No comments:

There will be something for everyone in February — all four street-date Tuesdays — from the Criterion Collection.   All selections released during the month will be available as either DVD or Blu-ray product offerings.

While filmgoers taste can vary, you’d be hard pressed not to single-out the newly-restored release on Feb. 24 of Federico Fellini’s 1969 cinematic masterpiece, Fellini Satyricon, as the crown jewel of the month.

This sumptuous visual feast arrives with an interesting commentary option — an adaption of Eileen Lanouette Hughes’s memoir “On the Set of Fellini Satyricon: A Behind-the-Scenes Diary.”   We are not quite sure how this is being done, but it certainly piques one’s interest. 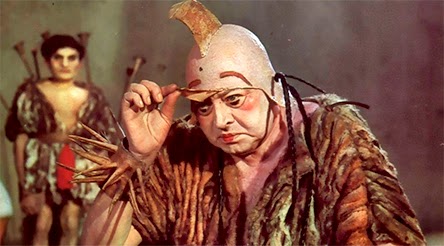 Other bonus goodies include the feature-length documentary, Ciao, Federico!, a newly-prepared interview with cinematographer Giuseppe Rotunno (Oscar-nominated for All That Jazz), vintage interviews with Federico Fellini and more.

Another jewel on the calendar is the Feb. 10 release of auteur filmmaker Nicolas Roeg’s 1973 thriller, Don’t Look Now, teaming Donald Sutherland and Julie Christie … and of course the canals and narrow streets of Venice, Italy. 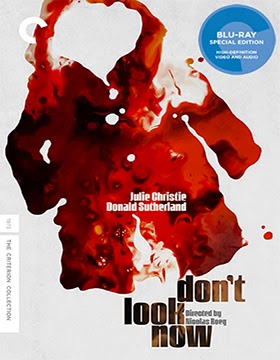 Bonus features include two documentaries, Something Interesting and Nicolas Roeg: The Enigma of Film, the short film Don’t Look Now: Looking Back and a 2003 Q&A session with filmmaker Nicolas Roeg at the Ciné Lumière in London.

Elsewhere on the February release calendar are Jean-Luc Godard’s Every Man For Himself and Argentine filmmaker Lucrecia Martel’s 2001 “dramedy,” La Ciénaga … both will be available on Feb. 3.

A new transfer of Ozu’s Autumn Afternoon will be available on Feb. 17, Jean Renoir’s 1936 film release of A Day in the Country streets on Feb. 10 and director Martin Rosen’s 1978 film adapation of the Richard Adams novel, Watership Down, will have a new look on Feb. 24

Posted by DVD & Blu-ray Release Report at 9:39 PM No comments: 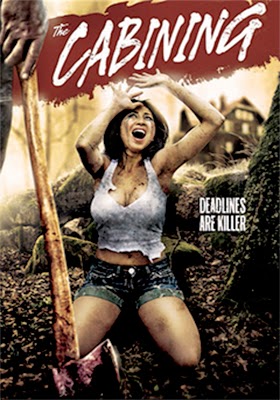 Jan. 13 is the DVD debut date for writer/director Steve Kopera’s horror tale (with a light touch) The Cabining, which puts forth the premise that “writer’s block” can be a killer.

Todd (played by filmmaker Steve Kopera) and his screenwriting buddy Bruce (Bo Keister) are desperate to come up with a script — a script that can be turned into a viable film — especially since Todd’s eccentric uncle, Sarge (Richard Riehle), is willing to bankroll their project but on one condition … he needs to feel it.

So Todd comes up with a brilliant idea, which for horror fans means a victim pool is to be assembled.  Only instead of the alluring beauties heading off to a cabin in the woods to be slaughtered one by one by one, they are already there.   What, how convenient is that? 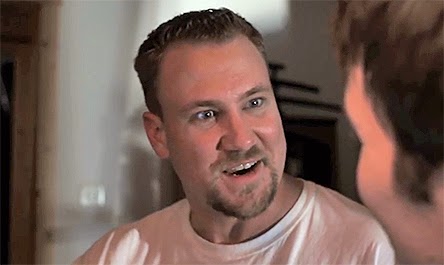 Yes, it’s the artist retreat of Shangri-La and Todd — and not-so-much Bruce — get their creative juices flowing when the other guests start having “accidents.”   It’s too good to be true … the script is literally writing itself.   A hot body here (Mindy: Angela Relucio; Celeste: Melissa Mars; Lacey: Alice Sherman), a kook there (Jasper: Luce Rains) and a pool of blood … lots of blood!   It’s a writer’s paradise!

The Cabining is great fun … and a terrific way to kick off the New Year!

Posted by DVD & Blu-ray Release Report at 9:31 PM No comments: 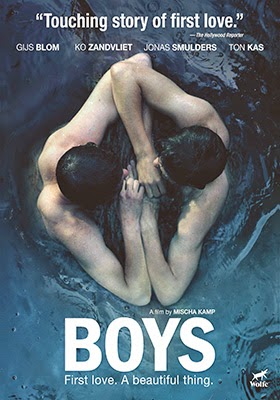 Sieger (Gijs Blom — Sonny Boy, YOLO: You Only Live Once, etc.) is 15 and in love.   He’s training hard for a forthcoming track competition and has little time for local beauty, Jessica (Lotte Razoux Schultz), but that might simply be an excuse.

It seems that fellow runner and relay teammate, Marc (Ko Zandvliet), has stirred feelings within him that he hasn’t quite come to terms with.   He’s more outgoing and may or may not feel exactly the same way that the more sensitive Sieger does … and therein lies the rub.   They train, there is the tranquil beauty of the Dutch countryside and these coming-of-age feelings are hard to contain.

Kamp’s Boys is a lyrical work that doesn’t push, but takes its time — coupled with outstanding visuals — in exploring the mixed-feelings of two young men on the verge of discovering who they are.   Presented in Dutch with English subtitles. 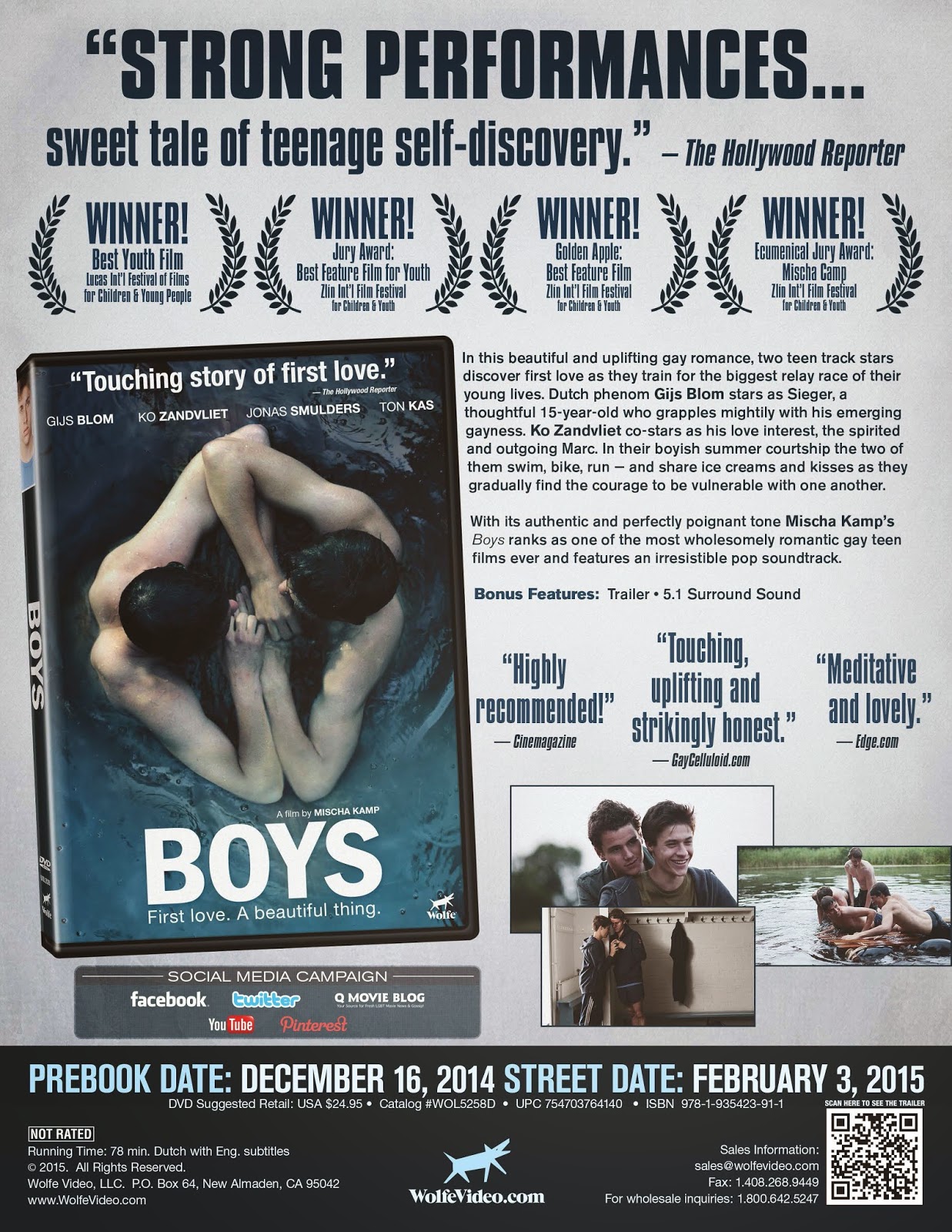 Posted by DVD & Blu-ray Release Report at 9:21 PM No comments:

Boxtrolls Heads To DVD And Blu-ray From Universal Studios Home Entertainment On Jan. 20 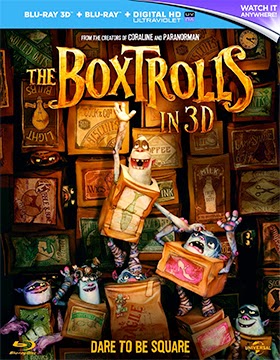 Universal Studios Home Entertainment has selected Jan. 20 for delivery of DVD and two Blu-ray/DVD Combo Pack (with or without a 3D viewing option … both include SKUs include UltraViolet) editions of the animation filmmaking team of Graham Annable and Anthony Stacchi’s Boxtrolls.

Based on the illustrated novel “Here Be Monsters!” by Alan Snow and featuring the voices of Ben Kingsley (as the evil Snatcher), Isaac Hempstead Wright (as Eggs), Dee Bradley Baker and Elle Fanning, Boxtrolls arrives on DVD and Blu-ray with an examination of six “animatic” sequences (with commentary), a five-part Behind-the-Scenes presentation titled “Dare to be Square,” plus five additional featurettes and commentary from co-directors Graham Annable and Anthony Stacchi.

Posted by DVD & Blu-ray Release Report at 9:18 PM No comments: 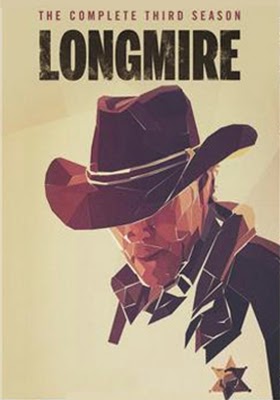 Warner Bros. Home Entertainment will be putting smiles on the faces of the fans of outcast Sheriff Walt Longmire on Mar. 3 with the DVD release of Longmire: The Complete Third Season.

The brains over at A&E are batting at least 0-for-2 with the stellar programming decisions that they’ve made during the past year.  First they picked a very public and very political fight with the cast of Duck Dynasty, their top-rated program.   That was a PR disaster and got people to thinking why on earth is that particular show on A&E in the first place.
It’s the money of course … advertising.   They ate crow and the Robertson clan flew even higher!

So with that little tantrum behind the management, they turned their glaze on another popular series, Longmire, the series that sprung from the pages of mystery writer Craig Johnson novels.

Starring Robert Taylor as the iconic lawman, who is joined by Lou Diamond Philips, Cassidy Freeman and Bailey Chase, the series maintained exceptionally strong cable rating and a very loyal audience.  You would think that A&E would be all smiles, but they abruptly cancelled the series because the show’s audience didn’t “fit” a certain desired profile. 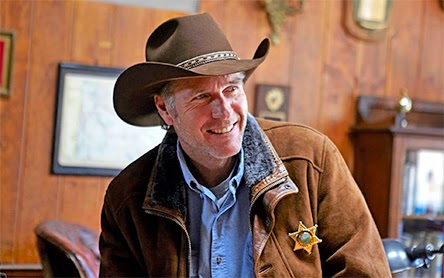 That bit of hubris has not only cost A&E a very popular series, but Netflix is now the one that is all smiles with the announcement that Longmire has a new home.  Orange is the New Black, House of Cards and Longmire … do you see a trend here?

As to Longmire: The Complete Third Season, Warner Bros. Home Entertainment will be delivering all ten episodes as a double-disc DVD presentation.   Bonus features include a newly prepared production featurette titled “The Ghost in the Storm.”

Posted by DVD & Blu-ray Release Report at 9:16 PM No comments: 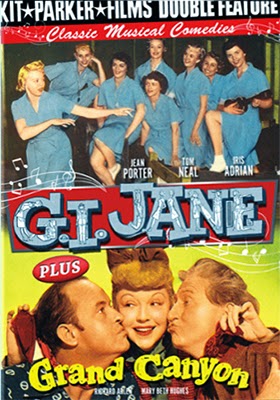 VCI Entertainment announced this week a pair of new-to-DVD releases that will be available to collectors, film buffs and the public at large during the month of January.

In G.I. Jane, Tim Rawlings (played by none other than Tom Neal), who is working in the new medium of television, finds himself drafted into the Army and lets his imagination run wild.   A remote desert island becomes his home, but not to worry as he manages to redirect a group of WACs to the base, including Jan (Jean Porter) and Lieutenant Adrian (Iris Adrian). 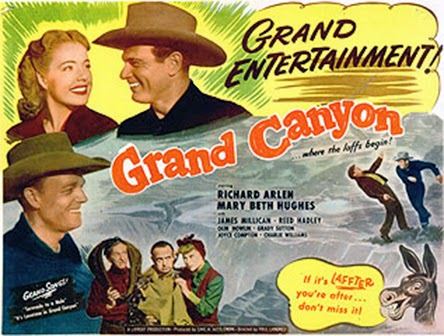 Following World War II filmmakers were able to take to the road and shoot on location (John Ford being the most notable among them).   In Grand Canyon, film editor-turned-director Paul Landres took his company of actors to the actual Grand Canyon for this romantic comedy about a film company shooting on location who just happens to lose their lead actor to an injury and scramble to come up with a replacement.

The film’s cast is an interesting one, which includes Richard Arlan, Mary Beth Hughes, Reed Hadley and Grady Sutton.

On Jan. 27, VCI Entertainment will be releasing ten vintage episodes from the first season of the acclaimed Emmy-nominated crime series, Waterfront, starring Preston Foster as the skipper of the Cheryl Ann.   Title of the DVD collection is Waterfront TV Series: Collection One, which leads one to believe that more episodes will be on the way.

Posted by DVD & Blu-ray Release Report at 9:09 PM No comments:

Paramount Home Media's Men, Women and Children On DVD And Blu-ray On Jan. 13 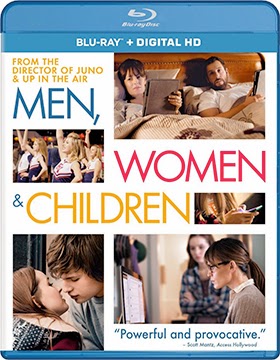 The ARR works out to 102 days and the box office gross from the film’s limited theatrical release stands at $668,001. 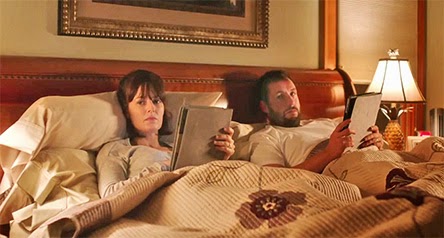 Throw in cheerleaders, eating addictions and complex inner-connected relationships — both adult and teen-wise — and you have all the makings of a modern Peyton Place on steroids!
Bonus goodies, which are limited to the Blu-ray SKU, include a pair of featurettes — “Virtual Intimacy” and “Seamless Interface” — and deleted scenes.

Posted by DVD & Blu-ray Release Report at 9:04 PM No comments:

Oscilloscope Laboratories Tabs Jan. 27 For The DVD Debut Of Art And Craft 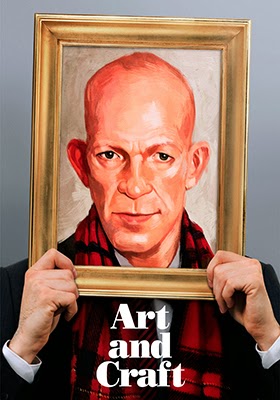 Oscilloscope Laboratories joins Virgil Films & Entertainment in the release of two riveting (and that’s not overstating it) documentaries that examine the world and history of art.   On Oct. 21, Virgil released documentary filmmaker Joe Medeiros’ Mona Lisa is Missing, an in-depth look at one of the most notorious art thefts in history.

Now word comes from Oscilloscope that Jan. 27 will mark the DVD debut of Art and Craft, which is one of the more fascinating stories in recent memory of both human behavior and the often murky world of art.   The documentary filmmaking team of Sam Cullman, Jennifer Grausman and Mark Becker shine the light on Mark Landis, an artist — more of a technician — who has forged countless paintings and then creates elaborate personalities to donate his works of forged art to museums all across the country.   Seriously!!

The ARR for the DVD release of Art and Craft is 130 days and the box office from the film’s arthouse run has generated ticket sales of $200,600. 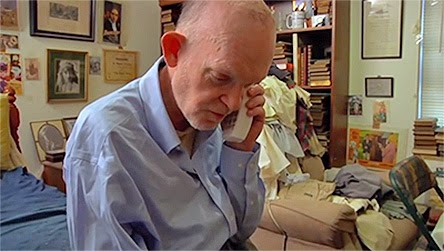 Like the theft of the Mona Lisa in August of 1911, you can’t make this stuff up.   Why on earth would anyone do forgery after forgery and then give them away?   Art and Craft is as good as any dramatic tale you could ask for … a “work of art,” so to speak.   This tale of bizarre human behavior is well worth a look.

Bonus features include commentary from the filmmakers, the featurette titled “Faux Reel” and deleted scenes.

Posted by DVD & Blu-ray Release Report at 9:00 PM No comments: