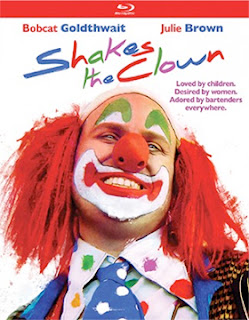 Mill Creek Entertainment revealed its first wave of priced-to-collect DVD and Blu-ray releases that will be retail-ready during the month of July.

In the front on the line are both DVD and Blu-ray editions of actor/director Bobcat Goldthwait’s 1991 clown-iconic black comedy, Shakes the Clown.   It will street on July 11.
This film, when initially released, was not well-received as both film critics and the film-going public in general didn’t “get it.”   The film features clowns — all kinds of clowns — and mimes, yes, mimes too (including an unbilled Robin Williams in a cameo performance as a mime teacher), but its not about clowns.  Or mimes either.

They, the clowns, are used by Goldthwait as symbols for what it is like to be a stand-up comedian.   It’s a lifestyle; a calling, and the funny stuff up on stage hides the pitfalls of the business itself.   There are cliques and communities that close themselves off from those who would dare enter … and theives too, those who steal material.   In other words, it’s a clown-eat-clown world. 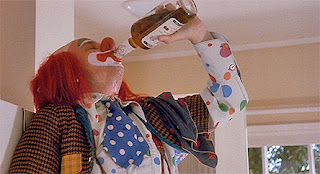 Goldthwait stars as Shakes, a clown with two problems (well, more than just two, but two works for this discussion) … he’s a drunk (a drunken clown, the irony in that is rich) and his dream job has been pilfered by Binky the Clown (played by stand-up comedian Tom Kenny, who has become one of most sought-after voice talents in Hollywood … SpongeBob SquarePants ring any bells?).

His manager (played Paul Dooley) is at his wit’s end with Shakes erratic behavior and his long-suffering girlfriend, Judy (Julie Brown), knows he needs help, but in Shakes world it all about the next gig and the next drink. 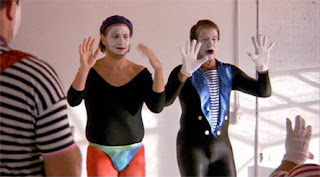 The humor is dark … Shakes the Clown is a dark, dark comedy.   Clowns are mean, clowns will even frame one of their own for murder … the life of a clown is not easy.
The casting of Shakes the Clown holds lots of surprises, in addition to Robin Williams, keep your eyes peeled for the like of Milton Berle, the late Florence Henderson (in a very un-Brady Bunch bit) and a young Adam Sandler. 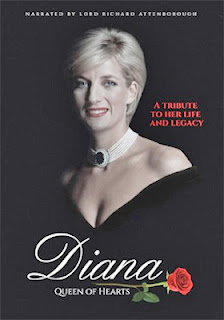 Also on the release schedule from Mill Creek Entertainment in July are five priced-to-collect films that will arrive on DVD on July 4.   These are: The Beast (1988, directed by Kevin Reynolds and featuring Jason Patric and Stephen Baldwin as members of a Soviet tank crew lost in Afghanistan), Birdy (1984, directed by Alan Parker and starring Matthew Modine and Nicholas Cage), Dragon Wars (2007, with Jason Behr and Amanda Brooks), Gardens of Stone (1987, directed by Francis Ford Coppola and teaming James Caan with Anjelica Huston) and lastly, director Alan Rudolph’s 1984 music-industry drama, Songwriter, which teamed Kris Kristofferson with Willie Nelson.

Rounding out the early July DVD product offerings on July 11 are Diana: Queen of Hearts (a 1998 tribute to Princess Diana) and the 2004 King Solomon’s Mines mini-series starring Patrick Swayze as the legendary Allan Quatermain. 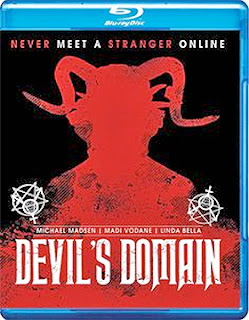 Cleopatra Music and Films, with sales and distribution support provided by MVD Entertainment Group, will be bringing both DVD and Blu-ray editions of director Jared Cohn’s Devil’s Domain to market on July 11.

High school bullying issues might well be the cause du jour these days, but filmmakers have found this subject to be a fertile ground for topics ranging from social outcasts acting out (Rebel Without a Cause), tales about victims of bullying driven to drastic measures (Before I Fall … out on May 30 from Universal), comedies about getting revenge on tormentors (Mean Girls) or horror tales about the same subject, revenge (filmmaker Brian De Palma’s Carrie in 1976 is a great example).

In Devil’s Domain we are introduced to Lisa Pomson (Madi Vodane in her film debut), a sad-sack of a high school teen with self-esteem issues that manifest themselves in the form of bulimia and self-mutilation (cutting).   If that wasn’t horrific enough, Lisa has also become fascinated with other girls (which makes her a tad creepy) and her so-called “friend” has cyber-stalked her with hidden cameras and posted the compromising videos online for all of her classmates to ogle. 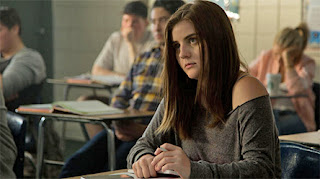 If there was a hole to crawl into it would have to be pit-sized for her; cavernous … maybe drop out of school, leave town or kill herself … these are the options she is facing as the torments come cascading in.   Her stepfather, played by Michael Madsen, is sympathetic to her plight, observing that with cyber-bulling, “you kids take cruelty to a whole ‘nother level.”   If only she could just turn it off.

In a moment of despair, Lisa unwittingly accepts an invitation from an online stranger by the name of Destiny (Linda Bella — Dracula: Reborn, Monsters in the Woods, etc.) to pay her a visit — she even sends a car to fetch her — and “talk” about her problems.   Destiny’s seduction of Lisa is quick and ever so simple.   She purrs that she can make all of Lisa’s dreams come true, “just help me help you.”  “Sure,” that’s all it takes to seal the deal!

You see this beauty, Destiny, is actually Satan in disguise and her sudden transformation to    Hideous to be sure … and one by one … by one all of Lisa’s nasty tormentors die horrible deaths (ripped to shreds, incinerated, flattened by a speeding truck … you name it, they die)!   Welcome to hell, Lisa … another hell, that is.   Now find a way out!
the real deal is quite effective. 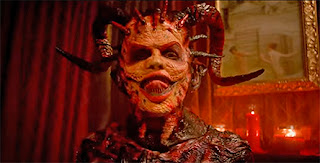 Writer/director Jared Cohn’s Devil’s Domain is an effective horror tale in both a traditional sense (plenty of bloodletting) and as a chilling tale about the day-to-day terror of being tormented and ridiculed by your classmates.   And then there is Destiny … a devilish seductress who preys on Lisa’s weaknesses and desires (that’s a horror show in and of itself). 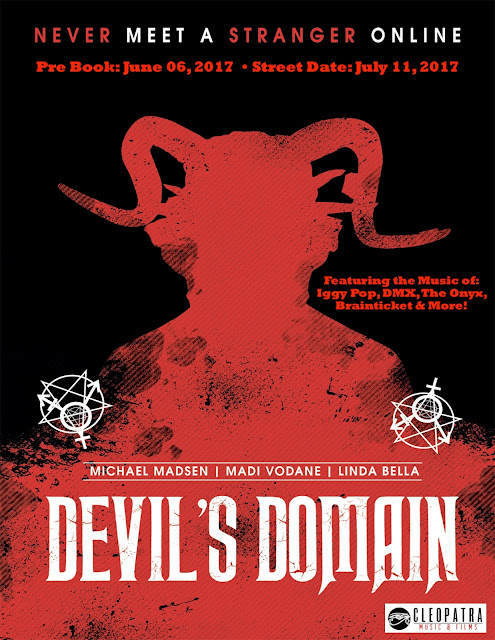 Posted by DVD & Blu-ray Release Report at 7:14 AM No comments:

The Ballad Of Cable Hogue On Blu-ray From Warner Bros. Home Entertainment On June 6 Warner Bros. Home Entertainment announced its June line-up of new-to-Blu-ray film catalog releases this past week … three in all.

Up first is the June 6 Blu-ray debut of director Sam Peckinpah’s 1970 end-of-an-era Western, The Ballad of Cable Hogue, starring Jason Robards as the proud owner of a watering hole.   If Peckinpah’s masterpiece Western, The Wild Bunch, signaled the end of an era — the ending of the “wild” frontier and the Western as a uniquely American film genre — The Ballad of Cable Hogue was the epitaph.

Not Peckinpah’s best film work, but an interesting character study nonetheless.   Robards shines in this bittersweet tale of a man struggling to survive, finding everything — including the love of his life (Stella Stevens) — and then is ironically killed by “progress” on the day that everything comes together.

Email ThisBlogThis!Share to TwitterShare to FacebookShare to Pinterest
Labels: DVD and Blu-ray Release Report, The Ballad Of Cable Hogue On Blu-ray From Warner Bros. Home Entertainment On June 6 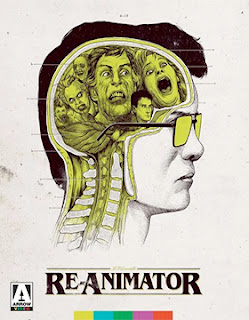 This 4K restoration includes two separate versions of the film — the unrated “Director’s Cuty” of Re-Animator, which clocks in at 86 minutes and the “Integral” cut, which includes elements of the R-rated domestic theatrical cut (some 63 combined edits that total an additional 19 minutes worth of footage), which was trimmed for violence and to make up for the shorter running time plot elements that were excised from the film were restored. 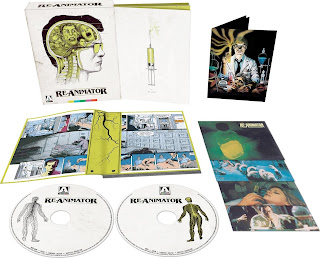 Plus there is documentary filmmaker Perry Martin’s feature-length documentary titled Re-Animator Resurrectus, deleted scenes, extended scenes and a pair of  featurettes — “Barbara Crampton In Conversation” and “A Guide to Lovecraftian Cinema.” 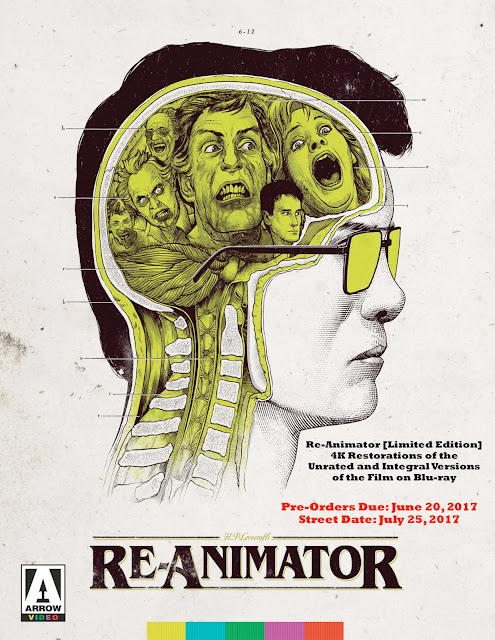 Posted by DVD & Blu-ray Release Report at 6:36 AM No comments: HBO Home Entertainment announced this past week that both DVD and Blu-ray editions of Pete Holmes tell-all comedy, Crashing: The Complete First Season, will be ready for fans to enjoy on Aug. 1.

What is it like to be a struggling stand-up comedian?   A marriage on the rocks, kicked to the curb, but always looking for the humor (and next bit of material for the stage) in the worst of it.   That’s Holmes’ life and that’s the premise of Crashing — all eight episodes from the show’s first season (featuring guest comedians that include Artie Lange, T. J. Miller and Sarah Silverman).

Bonus nuggets include the HBO Comedy Special titled “Pete Holmes: Faces and Sounds” and the featurette titled “The Art of Crashing.”

Posted by DVD & Blu-ray Release Report at 6:31 AM No comments: 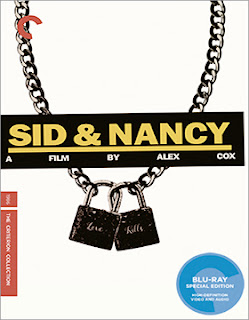 The Criterion Collection revealed its August DVD and Blu-ray release line-up this past week … so let’s get to it.

Our subjective choice for the lead title for the month of August from Criterion is director Alex Cox’s 1986 bio tale, Sid & Nancy, featuring Gary Oldman (in his first starring role) as Sid Vicious and Chloe Webb in her screen debut as Nancy Spungen.

This new 4K transfer will be available as both DVD (a double-disc set) and Blu-ray product offerings on Aug. 22.

Bonus goodies included with this presentation are two vintage commentary options — one featuring the 1994 Criterion laserdisc commentary by screenwriter Abbe Wool, actors Gary Oldman and Chloe Webb and Eliot Kidd (frontman for The Demons and contemporary of Sid and Nancy) and the second from 2001 with director Alex Cox (Repo Man) and actor Andrew Schofield (as Johnny Rotten) — and documentary filmmaker Martin Turner’s 1987 film England’s Glory (a behind-the-scenes look at the making of Sid & Nancy). 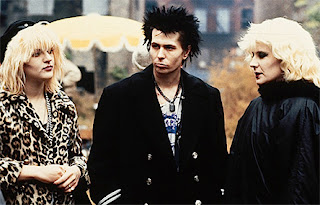 Other nuggets are the Sid and Nancy interview segments from documentary filmmaker Lech Kowalski’s D.O.A.: A Rite of Passage, a 1980 film chronicling the Sex Pistols’ disastrous 1978 U.S. tour and other archival interviews.

On Aug. 8, The Criterion Collection has a new 2K restoration of director Michael Curtiz’s The Breaking Point, his 1950 interpretation of the Ernest Hemingway novel, “To Have and Have Not.”    Both DVD and Blu-ray editions will be available.

John Garfield plays the Harry Morgan character (made famous by Humphrey Bogart in 1944), with Patricia Neal, Phyllis Thaxter and Juano Hernandez rounding out the cast. 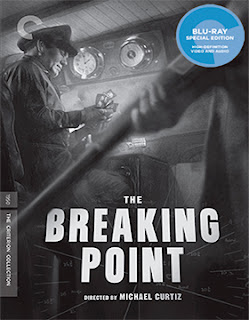 Rounding out the August release slate from The Criterion Collection are director Mike Leigh’s 1984 MOW, Meantime, and director Ronald Neame’s 1980 comedy, Hopscotch, teaming Walter Matthau with Glenda Jackson (both will be available on Aug. 15 as Blu-ray and DVD product offerings) … and on Aug. 22 look for DVD and Blu-ray editions of French actor, playwright and filmmaker Sacha Guitry’s 1951 film release of La Poison.

Posted by DVD & Blu-ray Release Report at 6:28 AM No comments: 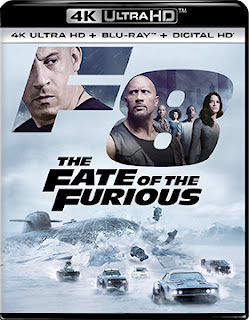 Universal Pictures Home Entertainment will light it up on July 11 with a three-SKU helping of director F. Gary Gray’s latest installment in the “Furious” film franchise series, The Fate of the Furious.

Dom (Vin Diesel) and Letty (Michelle Rodriguez) are enjoying the good life on their honeymoon in Havana (actually shot on location in Cuba), which includes a spectacular street race sequence (what’s a Fast and Furious film without one?) and the introduction of Cipher (Charlize Theron), who promptly blackmails Dom into abetting her cyber-terror plans.

Of course this pits Dom against his fellow DSS team members and sets in motion a mano-a-mano conflict with Hobbs (Dwayne Johnson) that dominates the bulk of the action.   No worries, things are patched up by the film’s end, however Cipher is still on the prowl and could rematerialize in April of 2019 when Fast & Furious 9 (tentative title) is slated to hit theatres nationwide.

Exclusive to the Blu-ray and 4K Ultra HD SKUs are three additional production featurettes — “The Cuban Spirit,” “In the Family” and “Car Culture.”

Posted by DVD & Blu-ray Release Report at 6:19 AM No comments: