Well Go U.S.A.'s The Seasoning House Ready For DVD And Blu-ray On Dec. 3 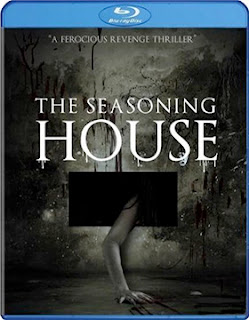 War is hell, but there is no hell quite like makeup and F/X wizard-turned-director Paul Hyett’s The Seasoning House, due out on DVD and Blu-ray from Well Go U.S.A. on Dec. 3.

Noted for his excellent work on such films as The Descent, Attack the Block and the cable series, Da Vinci's Demons, Hyett’s makes his debut film behind the camera with The Seasoning House and it is nothing short of a stunner … a horror tale that is difficult to watch and absorb even for the most hardcore of genre fans.

Why?  The answer is simple, because the events that unfold in The Seasoning House could be real (probably happening right now somewhere in the world as this is being written).   There are no monsters; no zombies; no creatures from the bowels of the earth in this one, just human beings doing unspeakable things to other human begins.

Somewhere — out of time and place — in war torn Bosnia is a whorehouse run by a man named Viktor (Kevin Howarth — Summer Scars, The Last Horror Movie, Razor Blade Smile, Etc.), a truly despicable individual whose “girls” are the spoils of war.   They are disposable young woman, beaten, drugged and raped repeatedly by the very soldiers that raided their towns and villages.  They are the unlucky ones … they survived the attacks, only to end up in hell.

The latest “recruit” to this illicit pleasure palace is Angel (Rosie Day — Homefront, Harley Street, Trust, Bernard’s Watch, etc.), malnourished and deaf, she becomes Viktor’s “assistant,” rather than just another one of the short-term pleasure girls (drugs and beatings do tend take a toll).   Her job is to clean up the mess that the brothel’s clientele leave behind — mend their wounds, wipe away the blood and then administer the morphine to keep them quiet and compliant for the next round of customers. 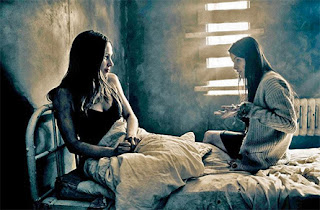 During the quite moments, and this is where it gets even creepier, Angels worms her way through the crawl spaces and openings in the walls and ceilings of the old building.  She spies on the soldiers as they come and go and makes her plans for an escape.

One day another newcomer arrives, Vanya (Dominique Provost-Chalkley), and Angel befriends her when she discovers that they can communicate with sign language.   What makes this turn of events even more compelling is that the friendship between Angel and Vanya makes Angel vulnerable to what she sees around her, especially when her friend is brutalized before her eyes … not by just anyone, but the very man who murdered Angel’s mother, Goran (Sean Pertwee — Dog Soldiers, Mutant Chronicles).

Escape plans turn into thoughts of revenge in the final act as Angel becomes the very thing that she sought to escape … brutal, unfeeling and capable of unspeakable things.   Hide your eyes, The Seasoning House is not an easy one to take.

The Conjuring On DVD and Blu-ray/DVD Combo Pack From Warner Home Video On Oct. 22 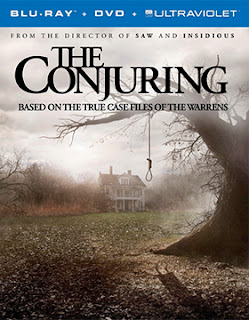 This film has all the makings of being his third franchise horror series — the first was the Saw horror film series (launched in 2004 with a box office tally of $55.2 million and six sequels … over $415 million in domestic box office receipts), the next being Insidious (2011 and $54 million at the box office) and Insidious Chapter 2 (which opened this past weekend to the tune of $41 million — should easily eclipse the original).

Warner Home Video has moved this haunted house tale quickly into the Halloween promotional season with an announcement this past week that Oct. 22 will be the street date for both DVD and Blu-ray/DVD Combo Pack editions (with UltraViolet).

The ARR is a zippy 95 days and summer movie-goers forked over $135.2 million in multiplex ticket purchases.

With those kind of numbers, expect 2014/2015 to bring fans The Conjuring 2.   No word yet, but the “Hollywood” studios are always on the lookout for a fresh film franchise series that can be milked for repeat visits from a predisposed fan base … this horror delight has all of the markings.

Working with a script provided by brothers Chad and Carey Hayes (Whiteout, The Reaping, House of Wax), filmmaker James Wan has fashioned a nifty yarn that combines a Civil War-era witch named Bathsheba (played by horror music composer Joseph Bishara, who also did double duty in Wan’s Insidious) with that of a haunted house thriller and the cringe-inducing elements of a good old fashioned exorcism.

The Perrons, Carolyn (Lili Taylor — A Slipping-Down Life, Dogfight, etc.) and Roger (Ron Livingston — Office Space, Swingers, Band of Brothers, etc.) move into a remote farmhouse with their five kids (all girls) and in doing so they set in motion a series of bizarre events that begins with the mysterious death of their dog and goes downhill from there. 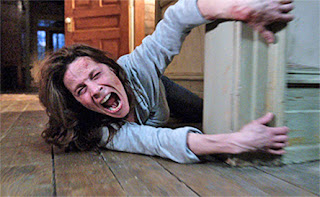 Soon experts in the paranormal are recruited to bring some sense to the craziness — enter the Warrens, Lorraine (Vera Farmiga — Safe House, Source Code, The Departed, etc.) and Ed (Patrick Wilson — as Josh in Wan’s Insidious films, plus such films as Phantom of the Opera, Hard Candy, etc.) and soon discover the secret behind the bizarre events that are driving the Perron family to the brink of madness.

What makes The Conjuring work so well is the elaborate backstory that the Hayes brothers have fashioned.   The legend of Bathsheba and the curse that she laid upon the land — not just the property that the Perrons have purchased — opens up all sorts of storytelling possibilities going forward.

As to bonus features, the DVD SKU has the featurette titled “Scaring the “@$*%” Out of You,” while the Blu-ray/DVD Combo Pack includes that featurette plus two additional ones — “The Conjuring: Face-to-Face with Terror” and “A Life in Demonology.”

Posted by DVD & Blu-ray Release Report at 7:16 AM No comments:

Email ThisBlogThis!Share to TwitterShare to FacebookShare to Pinterest
Labels: DVD and Blu-ray Release Report, The Conjuring On DVD and Blu-ray/DVD Combo Pack From Warner Home Video On Oct. 22

Virgil Films And Entertainment Says Nov. 26 Is The Street Date For Red Obsession 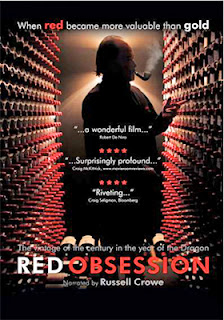 When China switched from Mao’s The Little Red Book to the Orwellian economic and social model, the result was the rise of a ruling class with money to spend.

Millionaires abound and one of their collective obsessions has been to drive the price of Bordeaux wine into the stratosphere (think: Dutch tulips of the 17th Century) ... and have brought out, in the process, con men and fake Bordeaux by the pallet full.

Wine connoisseur Russell Crowe serves as the narrator for this fascinating feature-length documentary. 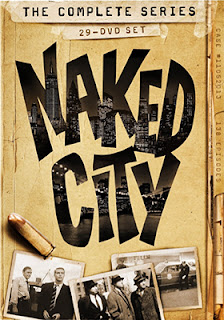 It begins, “There are 8 million stories … ” and instantly you know that the voice over (Lawrence Dobkin) is talking about the Naked City.   On Nov. 5 you won’t be getting “this has been one of them,” but rather ALL OF THEM!

That’s what Image Entertainment has planned with the whopping 29 DVD-disc collection of Naked City: The Complete Series, which features the 39 half-hour episodes from the 1958/1959 season (canceled) and all 99 hour-long episodes that were aired when the series was resurrected for the 1960/1961 broadcast season (running through May of 1963).

This crime drama, noted for its use of “guest stars,” showcased the talents of such “up-and-comers” as Gene Hackman, Robert Redford, Robert Duvall, Dustin Hoffman, Martin Sheen and Peter Fonda … and those are just for starters (it is an impressive list).

John McIntire and James Franciscus were the series regulars during the launch phase, with Horace McMahon, Paul Burke and Harry Bellaver taking over for the hour-long revamp.
The bonus feature for this DVD collectible set from Image Entertainment includes the original broadcast commercials (talk about a “time machine,” wow)!

Also getting a DVD release date this past week is writer/director Scott Di Lalla’s supernatural thriller, I Am ZoZo.   Street date is Nov. 19. 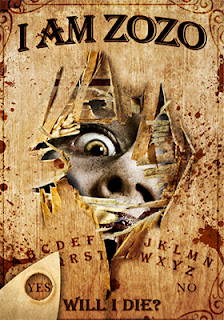 What a clever film we have here, one that Image has been wise enough to move just beyond the Halloween promotional season.   Yes, it fits there, but the run up to Oct. 31 this year is exceptionally crowded with some really tasty genre treats, including Image Entertainment’s own entries, Aberration (Sept. 17), Bloody Homecoming (Sept. 24), Shiver (Oct. 8) and All Hallows' Eve (Oct. 29).

I Am ZoZo is based loosely on the “urban legend” that a demonic entity by the name of ZoZo has brought pain, suffering, insanity and even death over the years to those who have unwittingly conjured up its spirit through the use of the venerable parlor game, the Ouija Board.

Di Lalla starts with that as his premise … what you are about to see is more or less “real” and then he mixes in such horror motifs as the haunted house thriller, a ghost story and yes, college-age kids doing stupid things (throw in attractive young women and you’ve got it). 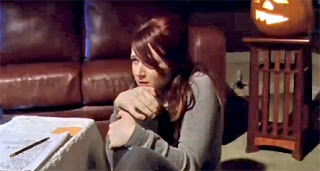 Five friends (the victim pool) head out to San Juan Island (near Seattle) for a weekend getaway and “document” their experiences with ZoZo and the Quija Board that summons the creature into their world … where, of course, bad things happen!

No word as of yet on bonus features for the DVD debut of I Am ZoZo. 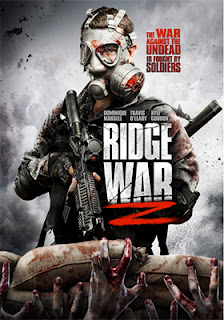 You have to admire indie filmmaker Alek Gearhart for coming up with a fresh way to spin a zombie outbreak story.   Titled Ridge War Z, Midnight Releasing has this Brain Damage Films release ready for its DVD debut on Nov. 5.

The story is told more or less in flashback as a writer researching the Battle of Gory Ridge has tracked down the battle-hardened veterans of that hold-the-line battle — those that lived through it — to recount their experiences in what was a pivotal point in the worldwide war against the undead.

Only three made it out and the horror of who and what was lost has taken its toll on them ... they’d like to forget the carnage of Gory Ridge, but sometimes the “dead” won’t stay dead and keeping it in has done more harm than good.

Posted by DVD & Blu-ray Release Report at 7:04 AM No comments: 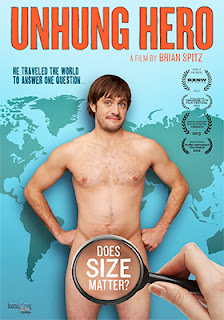 Filmmaker Brian Spitz (The Burr Effect) delivers UnHung Hero to the DVD market place on Nov. 19, courtesy of Breaking Glass Pictures.  This fun-filled, tongue in cheek “documentary” (wink wink, nod nod) about the quest of actor Patrick Moote to get the answer to one not-so-big question, does the size of one’s penis matter?

Honest, not making this stuff up.   The set up finds Moote being turned down on the jumbo-tron at a UCLA basketball game in his marriage proposal to his girlfriend (which seems a little bit crafty) and later learns from a YouTube video posted by her the reason why she turned him down … he’s too small.

That sets in motion a worldwide jaunt — from South Korea to Papua New Guinea and points in between — to discover truth.   It’s funny stuff, even if we suspect that the whole thing was hatched over a few beers. 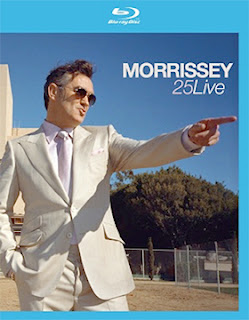 Titled Morrissey 25 Live, the concert showcases 19 numbers, including “Meat Is Murder,” “Maladjusted” and “Let Me Kiss You.”

Bonus features include four studio bonus tracks — “The Kid’s a Looker;” “Scandinavia;” “Action is My Middle Name” and “People are the Same Everywhere” — and two featurettes: “Behind The Scenes At Hollywood High” and “Grissle Bandage Present Lord Mudslide.”

The only bonus feature is an interview with CeeLo Green.