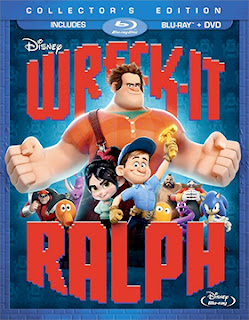 Bonus features include the animated short film Paperboy, alternate and deleted scenes, a collection of video game commercials featured in the film and the featurette titled “Bit by Bit: Creating the Worlds of Wreck-It Ralph.”   Exclusive to the Blu-ray editions is “Disney Intermission: The Gamer’s Guide to Wreck-It-Ralph.”