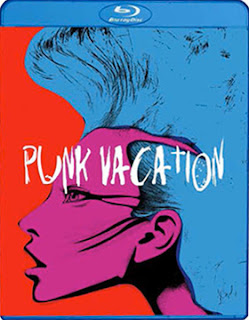 News arrived this past week that Vinegar Syndrome is bringing director Stanley Lewis’ cult-status film, Punk Vacation, to the home entertainment market on July 9 as a Blu-ray/DVD Combo Pack.

Murder in a remote hamlet leads to an all-out war between the inbred locals and, we kid you not, vicious punk rockers.   A classic!

Email ThisBlogThis!Share to TwitterShare to FacebookShare to Pinterest
Labels: DVD and Blu-ray Release Report, Punk Vacation From Vinegar Syndrome On July 9 As A Blu-ray/DVD Combo Pack