Lionsgate Home Entertainment Selects Feb. 11 As The Street Date For All Is Lost 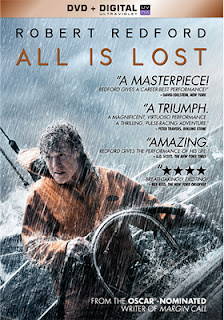 Robert Redford sets politics aside for a return to the screen in an action/dramatic role and absolutely nails it.   He has virtually no dialog, but as with Robert Ryan’s survival masterpiece from 1953, Inferno, dialog is not a necessity in writer/director J.C. Chandor’s All is Lost.

Lionsgate Home Entertainment has selected Feb. 11 (clearly with an eye towards the Oscar-awards season) as the street date for DVD and Blu-ray SKUs (with UltraViolet).

The ARR works out to 116 days and the box office tally thus far stands at $4.9 million (that should grow as theatre-goers discover this film gem).

It makes you wonder why such a well-received film — from both audiences and critics alike — got such a limited theatrical release (under 400 screens).   Is it Redford’s age — fear that younger audiences don’t know who he is?  Is it his left-leaning politics — has that turned half the potential audience off to anything he might be in?   It is a sad state of affairs … everything is politics these days.

Regardless of the negatives relating to age and politics, Robert Redford’s eight-day edge-of-your-set adventure in the Indian Ocean is clearly one of the best films of 2013!

Bonus features include commentary from Oscar-nominee J.C. Chandor (Best Original Screenplay for Margin Call), who is joined by producers Neal Dodson and Anna Gerb (they previously teamed for Margin Call), and three featurettes, two of which are multi-segment presentations.

Email ThisBlogThis!Share to TwitterShare to FacebookShare to Pinterest
Labels: DVD and Blu-ray Release Report, Lionsgate Home Entertainment Selects Feb. 11 As The Street Date For All Is Lost