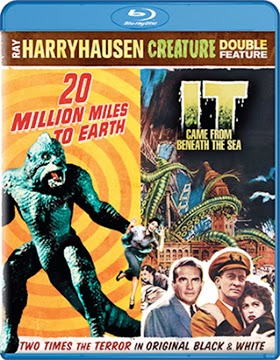 Mill Creek Entertainment will have genre fans’ hearts all a flutter on Aug. 19 with the Blu-ray release of the Ray Harryhausen Creature Double-Feature.

For just $14.98 (before discounts at retail), you get hi-def versions of director Robert Gordon’s 1955 sci-fi thriller, It Came from Beneath the Sea and director Nathan Juran’s 1957 alien creature feature, 20 Million Miles to Earth.

It Came from Beneath the Sea teams Kenneth Tobey (The Thing from Another World, The Beast from 20,000 Fathoms, Billy Jack, etc.) with Faith Domergue (who starred the same year in This Island Earth) and features Ray Harryhausen’s atomic age octopus and its attacks on San Francisco’s Golden Gate Bridge and the iconic Ferry Building on the Embarcadero.

The Ymir, an ever-growing creature from Venus, is center stage in 20 Million Miles to Earth, which starred William Hopper (perhaps best known as Paul Drake in the Perry Mason television series, plus such films as Rebel Without a Cause, The Deadly Mantis and The Bad Seed) and Joan Taylor (she starred in Earth vs. the Flying Saucers the previous year).   The big set piece here is the climatic battle at the Colosseum in Rome!