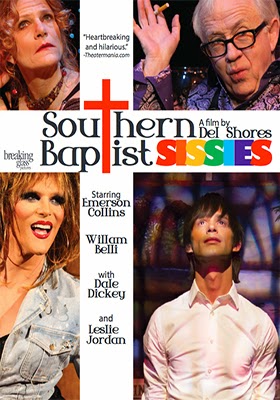 He could have simply shot a straight-on version of his play (Tyler Perry has been cranking’em out left and right), but Shores takes us from the moribund confines of the stage, complete with audiences, to any empty theatre periodically and in doing so breaks the pane of the stage play construct.

This use of the film process moves his four protagonists from simply being characters to real people (think:  Shakespeare’s As You Like It, “All the world‘s a stage, and all the men and women merely players”).

Chief among the “story tellers” is Mark (Emerson Collins — as Max in Del Shores’ Sordid Lives: The Series), who provides the opening monologue and pretty much sums up his frustration, anger and loneliness over being raised a Southern Baptist and yet ostracized, not for anything he has done, but for what he is, gay. 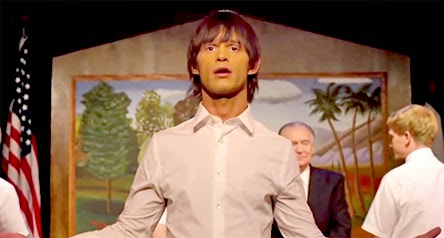 Southern Baptist Sissies is drenched in irony, in that the four protagonists feel trapped in where they are in their lives … a need for a loving God; the words and deeds of Jesus are very much a part of their make-up.   And yet, there is that anger.

Ultimately Shores moves through this and ends on a positive message.   If only the real world were so hopeful.

Bonus goodies include a pair of music videos — “Stained Glass Window” and “Pass Me Not” — a behind-the-scenes production featurette and newly-prepared cast interviews.
Posted by DVD & Blu-ray Release Report at 4:40 PM