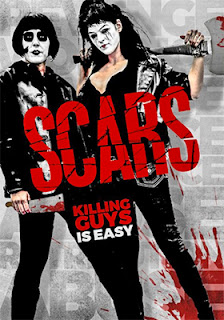 Meet Scar and Scarlett, beautiful — in a freaky sort of way — sisters by “blood,” who have a penchant for killing “dudes.”   They are serial killers, but they didn’t start out that way.

Scar (Danielle Cole) is a goth; a punk who is perhaps best described as being “adrift” in the world; morose, while Scarlett (Neale Kimmel) is a knockout blonde who uses her brains and dynamite good looks to hustle her marks — she’s a scam artist.

These seemingly mismatched women are the stars of writer/director Sean K. Robb’s Scars, which will be making its DVD debut on May 10 courtesy of Wild Eye Releasing.

Alone neither Scar nor Scarlett would be what you would call deadly.   Scar would be prone to go “turtle,” while Scarlett’s tendencies lean towards talking — “flirting” — her way out of a jam.   When events — a catalyseur if you will — throw them together they become one … a killing machine with no future, but they are going to enjoy the rush as long as they can.

When the bodies begin to pile up — gruesome, stylistic murders — a local detective, Mike Adams (Matt Wells), is assigned to the case, but we begin to suspect early on that he admires their work and is, perhaps, none too keen to see Scar and Scarlett’s bloody killing spree come to an end.

Filmmaker Sean K. Robb has a keen eye for visuals, which makes Scars something of a cross between a ghastly horror tale and Kabuki theatre … a bloody, visual feast that will certainly please genre fans come May 10.