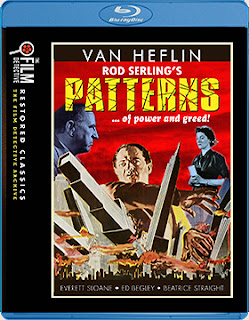 The Film Detective announced this past week that director Fielder Cook’s 1956 film adaptation of Rod Serling’s teleplay-turned-theatrical release, Patterns, will be issued as a restored (from original 35mm film vault elements) Blu-ray product offering on Sept. 27.

Serling, who would go on to gain iconic status for The Twilight Zone television series (1959 – 1964), got his big break (after years of work) with the script he fashioned for the Kraft Television Theatre in 1955 (a live broadcast) titled Patterns (it earned him an Emmy).

So well received was the original broadcast of Patterns, that Kraft and NBC re-broadcast it a month later … it wasn’t a rerun, as such things have come to be known, but an exact restaging of the live broadcast.  That was unheard of … a second showing of a live TV show!
With the success of MGM’s 1954 big-budget, all-star boardroom drama, Executive Suite (four Oscar nominations), coupled with the resounding success of the Kraft Television Theatre broadcasts, it was only natural that the film would make its way to the theatrical arena. 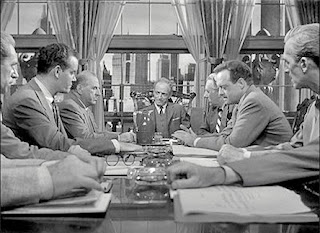 This happened in 1956, with Serling providing the script and director Fielder Cook, who worked extensively in early television, making his theatrical debut as both the director of the TV broadcast and this theatrical adaptation.

The gist of this powerful drama, has ruthless business tycoon, Mr. Ramsey (Everett Sloane), bringing in a new executive, Fred Staples (Van Heflin), to replace the aging Bill Briggs (Ed Begley).   Briggs has built the company and Ramsey can’t bring himself to out-and-out fire or force the retirement of the man, so he stoops to nasty and petty intrigues.   In the meantime, Staples takes a liking to man he is to replace and has something a “come-to-Jesus” meeting with his boss when Ramsey’s games spin tragically out of hand. 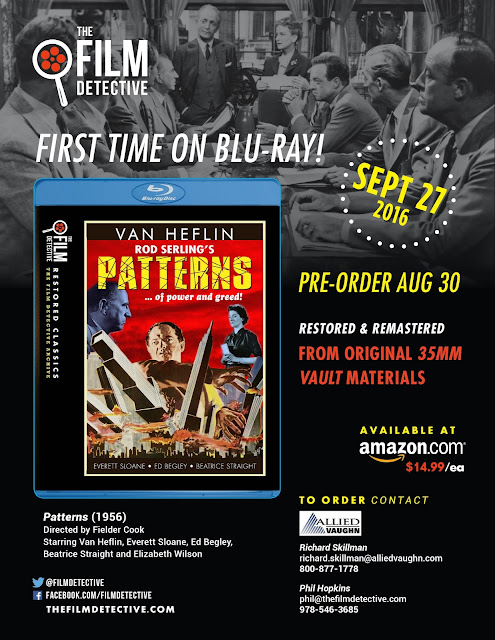