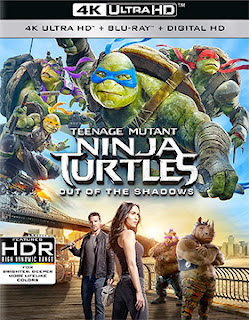 Paramount Home Media announced this past week that Leonardo, Raphael, Donatello and Michelangelo will return to the home entertainment arena on Sept. 20 in their latest live-action theatrical smash, Teenage Mutant Ninja Turtles: Out of the Shadows.

Planned for release are a four-SKU helping, including a 4K Ultra HD/Blu-ray Combo Pack edition, two Blu-ray/DVD Combo Packs (one with and one without a 3D viewing option) and a stand-alone DVD selection.

Shredder is in prison and the Teenage Mutant Ninja Turtles have returned to their subterranean home, but the serenity of the sewers doesn’t last long as a new force of evil is about to descend upon the earth … the dreaded Krang, an inter-dimensional alien! 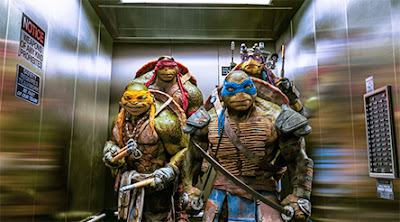 No sooner can you say “cowabunga” and we see Krang freeing Shredder and recruiting him to aid in his invasion of earth.   Power corrupts, so he’s an easy recruit.   Only three elements need be recovered and a portal to another dimension will be open, the “Technodrome” will be complete and end-times will be upon us!

Krang has also given Shredder a potion that will allow him to recruit and transform mutants of his own — which he promptly uses on his henchmen Bebop (Gary Anthony Williams) and Rocksteady (Stephen Farrelly) — turning them into creatures that can easily handle the likes of Leonardo and his crew.

Doomed?   Nope!!   April (Megan Fox) manages to steal the “mutagen” formula, gives her turtle friends the head’s up and makes an ally in the form of Casey Jones (played this time by Stephen Amell) … it’s now just a race — a non-stop action race at that — against time to stop Krang from bringing his plan to fruition.

Bonus goodies, include deleted scenes, “Turtle Eggs” and five featurettes — “We Are Family,” “Whoa! Expanding the Turtleverse,” “House Party,” “It’s Tricky: Inside the Van” and “ILM: The Effects Beneath the Shell.” 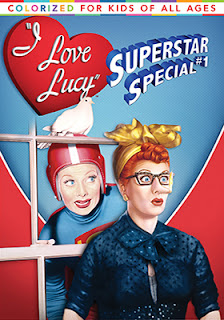 In other release news this week from Paramount Home Media, be sure to mark Oct. 4 on your DVD release calendar.   That’s the street date for I Love Lucy: Superstar Special #1.

This release features newly colorized versions of “L.A. at Last” (first aired in February of 1955 and features Lucy’s hilarious run-in with William Holden at the Brown Derby) and “Lucy and Superman” (January of 1957, featuring George Reeves as the legendary Superman).

And, for those not into colorization, both of these classic I Love Lucy episodes can also be viewed in glorious black and white.