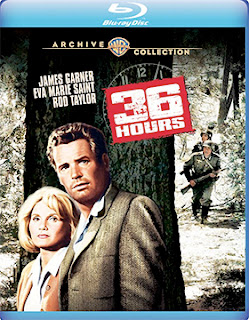 Warner Bros. Home Entertainment has placed five new Blu-ray selections on its home entertainment release calendar for delivery to consumers during the month of April.   All five films are from the 1960s (it looks a little bit like a “by the numbers” array of films not previously available on Blu-ray).

Arriving on Apr. 11 is writer/director George Seaton’s 1965 film adaptation of Roald Dahl’s 1946 short story, “Beware of the Dog,” which reached the screen as 36 Hours.

This very clever film has James Garner starring as Major Pike in the U.S. Army who has just come from a briefing with General Eisenhower about the D-Day invasion and has been dispatched to Lisbon to disseminated false information about a planned landing at Pas de Calais.   He is, however, captured.   His world goes black.

No worries, the German operatives in Lisbon apparently worked him over to the point of total collapse, but he didn’t give up the details of the invasion.   He finally awakes from the trauma in an Allied hospital, the war long since over. 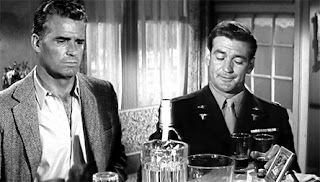 A chipper Major Gerber (played by Rod Taylor) tells him that has been under psychiatric care for a number of years in an attempt to help him regain his memory.

For Pike the place has the look and feel of an Army hospital — the recovering patients are playing baseball — and he has a beautiful nurse (Eva Marie Saint) to care for him, but little details here and there begin to form a picture that this is just an elaborate charade.

A nice twist at the end makes 36 Hours a World War II film that is in a category all to itself. 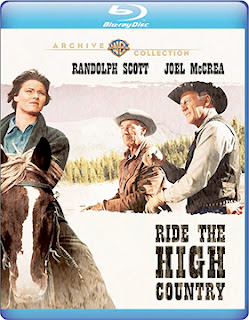 Other Blu-ray debuts include auteur filmmaker Sam Peckinpah’s 1962 Western, Ride the High Country (of note, The Criterion Collection announced one week ago a June 27 restoration of Peckinpah’s Straw Dogs), which will be available on Apr. 4.

Henry Fonda will be showcased on Apr. 18 in both director Burt Kennedy’s 1965 film release of The Rounders and filmmaker Delmer Daves’ 1963 film adaptation of the late Earl Hamner, Jr.’s 1961 novel, Spencer’s Mountain.

And, Apr. 25 is the street date for a Blu-ray edition of director Arthur Hiller’s 1963 comedy release of The Wheeler Dealers, starring James Garner and Lee Remick.