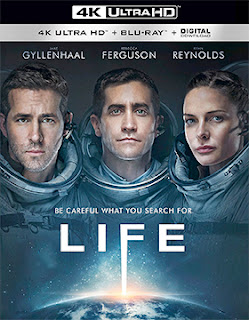 Sony Pictures Home Entertainment has the task of trying to salvage something from the lost opportunity of the theatrical launch of director Daniel Espinosa’s big-budget sci-fi thriller, Life.

That fresh opportunity comes on June 20 in the form of a three-SKU home entertainment push — DVD, Blu-ray and 4K Ultra HD/Blu-ray editions will be offered.

It’s a mystery as to how the studio could pump over $80 million into the budget of a sci-fi/horror tale — with a cast that features Ryan Reynolds, Jake Gyllenhaal and Rebecca Ferguson (The Girl on the Train, Mission: Impossible - Rogue Nation) — plus another $15 to $25 million in domestic P&A and not generate more than just lackluster results.

That’s one hell of an investment to pull in just $30 million in domestic box office receipts.   So that puts pressure on the home entertainment group to trim some of that red ink.

For the record, the ARR for that June 20 release date works out to a swift-to-market 88 days.
Posted by DVD & Blu-ray Release Report at 6:55 AM