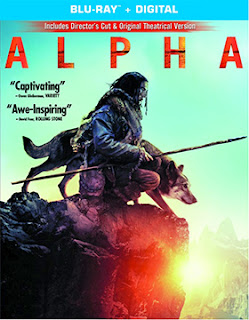 Sony Pictures Home Entertainment’s caveman and wolf saga, director Albert Hughes’s Alpha, will be making its way to the home entertainment marketplace on Nov. 13 as both DVD and Blu-ray product offerings.

Despite a slow start during its mid-August theatrical run, Alpha, fairly strong word of mouth propelled the film to an impressive $35.5 million in domestic box office receipts.   The ARR works out to 88 days.

Bonus goodies common to both the DVD and Blu-ray SKUs consist of two production featurettes — “The Wolf Behind Alpha” and “Boy & Wolf.”

Exclusive to the Blu-ray presentation are a “Director’s Cut” of the film (no information on the additional running time associated with the “Director’s Cut” was provided by Sony Pictures), both an alternative opening and ending (with commentary by Hughes), deleted scenes (also with commentary by Hughes) and two additional featurettes — “Building the World” and “A Hero’s Journey.”