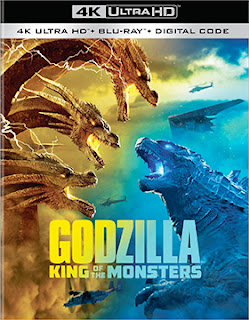 The “Kaiju” is back.  Big time!!  Only last week Mill Creek Entertainment announced that the Japanese Kaiju-based television series (and subsequent movies) Ultra Q and Ultraman would be delivered as Blu-ray collections on Oct. 15.

This week Warner Bros. Home Entertainment got in the action with the announcement that a three-SKU helping of writer/director Michel Dougherty’s Godzilla: King of the Monsters would be available for fans to savor on Aug. 27.

Not only did Godzilla stomp to $109.2 million in domestic ticket sales in June (overseas another $275 million in box office receipts), but the beast of lore brought with him Mothra, Rodan and King Ghidorah.   That is quite the ensemble.  For the record, the ARR comes in at 88 days.