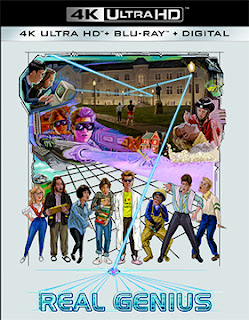 Sony Pictures Home Entertainment announced this past week that director Martha Coolidge’s summer of 1985 comedy, Real Genius, has been given a new 4K film restoration (from the original camera negative and approved by filmmaker Martha Coolidge) and will be available as a 4K Ultra HD/Blu-ray Combo Pack edition on Sept. 13.

Newcomer Val Kilmer stars … this was only his second film appearance, with his iconic performance as Ice in Top Gun to follow in 1986, as Jim Morrison in The Doors in 1991 … Doc Holliday in Tombstone (1993), Batman Forever (as Batman) and Heat (both in 1995) and more, many more, including his return as Ice in the 2022 box office smash, Top Gun: Maverick.

Others in the cast include William Atherton (as Thornburg in Die Hard and Die Hard 2, plus such films as The Day of the Locust, Looking for Mr. Goodbar, Ghostbusters, The Pelican Brief, etc.), Gabriel Jarret, Jonathan Gries (Get Shorty, Napoleon Dynamite … as Broots in The Pretender television series), Michelle Meyrink … as Suzi in Coolidge’s Valley Girl) and Patti D'Arbanville (Rancho Deluxe, Big Wednesday … as Lt. Cooper in the New York Undercover TV series).

Bonus features include commentary with director Martha Coolidge, a television cut of the film, the “Balloon Chair” deleted scenes and a montage of outtakes.