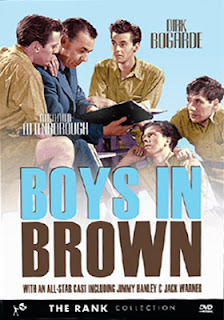 This drama about Borstal Prison life (British for juvenile detention center) is of note for two reasons — the casting rising Brit stars Dirk Bogarde and Richard Attenborough as the leads and as a precursor to the uniquely “Kitchen Sink” films that would arrive during the 1950s and early 60s (notably Look Back in Anger and The Loneliness of the Long Distance Runner).

It’s not quite social realism that defined the "Kitchen Sink" film movement, but it is damn close and the class distinctions are duly noted.