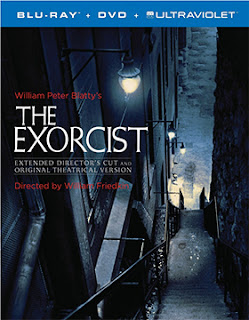 One of the best horror films of the 1970s was director William Friedkin’s The Exorcist.   He cleverly used the medium of sound to create a sense of foreboding and terror that paid huge dividends in the third act — in the hands of a less filmmaker the Linda Blair sequences could have ended up being downright silly.   Pea soup, head a’spinning and priest a’flyin’ … oh my!

On Oct. 8, Warner Home Video will release a three-disc Blu-ray collection titled The Exorcist: 40th Anniversary Edition.  It will feature both the original theatrical cut (1973) and Friedkin’s “Extended Director’s Cut” of the film on separate Blu-ray discs (with three different commentary options — two with Friedkin and one featuring William Peter Blatty).

The third disc contains two newly-prepared featurettes, “Beyond Comprehension: William Peter Blatty's The Exorcist” and “Talk of the Devil,” plus such vintage goodies as the 1998 BBC documentary, “The Fear of God: 25 Years of the Exorcist,” interviews, radio spots, storyboards and three featurettes.