The Adventures Of Champion The Wonder Horse From Film Chest On Feb. 4 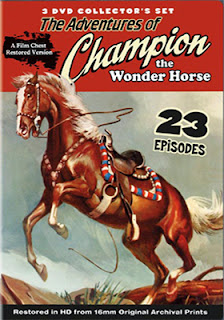 Film Chest announced this past week that the long wait is over for collectors anxious to get their hands on the 1955/56 short-lived Western adventure series, The Adventures of Champion the Wonder Horse — a spinoff of the popular TV series of the period, The Gene Autry Show, with the legendary Western and theatrical serial filmmaker Armand Schaefer acting as the show’s producer.

23 episodes have been restored from surviving film materials and will arrive on Feb. 4 as a three-disc collection.   The series, starring child star Barry Curtis as Ricky North and Gene Autry’s Champion, featured guest stars that proved to be a virtual who’s who of Western stars of the period, including Tristram Coffin, Roy Barcroft and Walter Reed.

Email ThisBlogThis!Share to TwitterShare to FacebookShare to Pinterest
Labels: DVD and Blu-ray Release Report, The Adventures Of Champion The Wonder Horse From Film Chest On Feb. 4