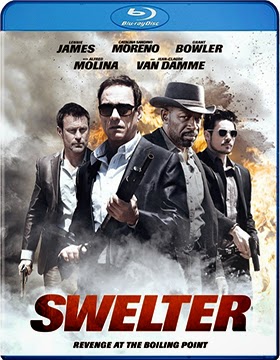 A Las Vegas luxury resort is assaulted by the “Rat Pack.”  No, not Frank, Dean and the boys … not that Rat Pack, but a group of five heavily armed men who make off with close to $10 million.

But four of the five are captured, while the fifth (with the loot) gets away.  That’s the set-up.
Off to prison are Boyd (Josh Henderson), Cole (Grant Bowler), Kane (Daniele Favilli) and Stillman (Jean-Claude Van Damme).   And there they sit for ten long years, until they escape.

Meanwhile, Bishop (Lennie James), the fifth member of their group, hasn’t gone far.  With no memory of the events (wounded during his escape) that led him to the desert in the first place, he has become the sheriff of a nearby desert hamlet (seemingly trapped in time).   He senses that he’s not “right,” but he’s trying to do the right thing.

The local doctor (played Alfred Molina) can find no particular reason for Bishop’s lapse in memory, but then again “Doc” spends most of his off-hours at the local cantina getting drunk.   It’s the Old West, but with cell phones, computers and cars instead of horses. 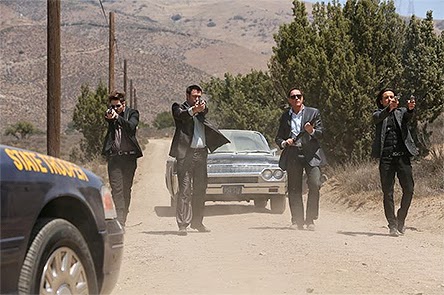 Following a gun battle with State Troopers, the Rat Pack seals off the town and is ready (and willing) to take it apart and kill anyone who gets in their way to find what belongs to them!   The clock is ticking and only Bishop stands in their way.

Swelter takes elements from several different film genres, deftly mixes them together — throws in some nice twists (one of the Rat Pack actually wants a real life) — and ultimately delivers a nicely turned action piece.  Slick.   Solid.  And well worth a look-see this August.