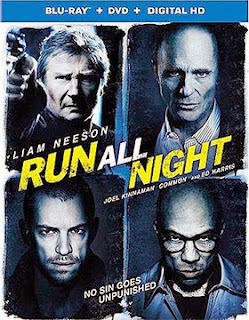 Warner Bros. Home Entertainment announced this past week that Barcelona-born filmmaker Jaume Collet-Serra’s latest action thriller, Run All Night, which teams him once again with Liam Neeson — in 2014 they delivered Non Stop — will be a DVD and Blu-ray/DVD Combo Pack launch on June 16.

The ARR is 95 days and the domestic box office take was $26.4 million.

This time out Neeson gets to return to his Irish roots as a former hit man by the name of Jimmy Conlon, but his professional moniker was “The Gravedigger.”  He was a long-serving enforcer for the New York City-based Irish mob, but that was long ago.

He is forced out of retirement — and forced to sober up as well — when his son (Joel Kinnaman — RoboCop) becomes tangled up with Albanian drug dealers and sets in motion a series of killings that, wouldn’t you know it, lead right back to Conlon’s old boss (played by Ed Harris) … there will be no peace until one, or both, of them end up dead!

Bonus features include deleted scenes, and a pair featurettes (exclusive to the Blu-ray SKU) — “Shoot All Night” and “Action All Night.”

Also added to the release calendar this past week for delivery on DVD on May 5 are a pair of long overdue Wallace Berry films.

The other Wallace Berry film getting a vault dust-off is director William A. Wellman’s 1945 film, This Man’s Navy, which takes a look at the LTA service (lighter than air … blimps) in the waning of World War II.   Tom Drake, James Gleason and Jan Clayton (as Ellen in the Lassie TV series) are Berry’s co-stars.