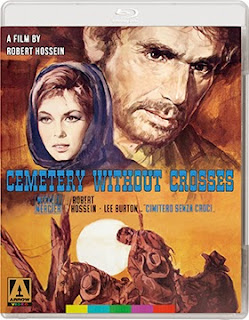 Arrow Video, with sales and distribution expertise provided by MVD Entertainment Group, has a brand restoration of actor/writer/director Robert Hossein’s 1969 Spaghetti Western, Cemetery Without Crosses (aka: The Colt and the Rope), ready for its domestic debut as a Blu-ray/DVD Combo Pack on July 21.

Teaming with horror icon Dario Argento, who co-wrote the script, Robert Hossein stars as a loner — who lives quite appropriately in a ghost town — with a checkered past.   His solitude is interrupted when Maria (Michèle Mercier — Shoot the Piano Player, Angélique, etc.) rides into town and recruits him — she is a former love interest — to revenge the brutal murder of her husband. 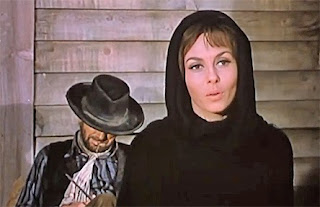 With few words, a six-shooter and a lone black leather glove — and without ever breaking a smile — he teams with the avenging vixen in a murder scheme of her own that doesn’t go exactly as planned.  Cemetery Without Crosses is a minimalist entry in the Spaghetti Western genre with a French-twist, but regardless of its style or origins, it delivers exactly what fans of the genre demand.

Bonus features include both the original Italian language track (with newly prepared English subtitles) as well as an English-dubbed viewing option, plus there’s a new video session with star and director Robert Hossein, a vintage French TV segment containing interviews with Robert Hossein, Michèle Mercier and Serge Marquand and a second vintage interview session with Hossein.