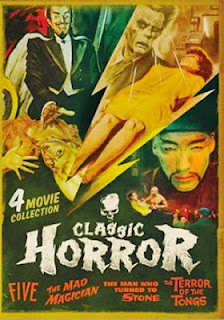 Mill Creek Entertainment has a sweet deal ready and waiting for fans of classic sci-fi and horror flicks on July 21.   For just $14.98 each (and that’s before discounts at retail), genre fans can snap-up the four-film collection titled Classic Horror, or the six-film set titled Vintage Sci-Fi Movies.

Classic Horror contains director Anthony Bushell’s 1961 Hammer Films release of The Terror of the Tongs, starring Christopher Lee as the no-mercy Chung King, the head of the Hong Kong-based Red Dragon Tong.   Murder and torture for this villain has no boundries!

Christopher Lee is joined by another icon of horror and the macabre, Vincent Price, who stars as Gallico the Great in director John Brahm’s 1954 tale of murder, The Mad Magician.   Mary Murphy (The Desperate Hours), Patrick O'Neal and Eva Gabor are his co-stars. 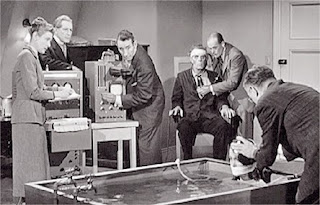 Rounding this four-film collection are director László Kardos’ 1957 film release of The Man Who Turned to Stone, starring Victor Jory as the 200-year old Dr. Murdock who sadistically drains the life out of captive teenagers who are prisoners at the La Salle Detention Home for Girls and Arch Oboler’s 1951 post-atomic holocaust tale, Five. 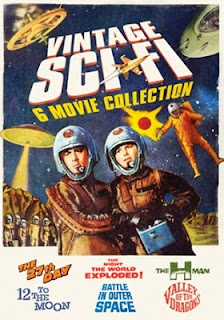 The 27th Day has five members from the United Nations — including Gene Berry and The Four Skulls of Jonathan Drake) — whisked away by alien invaders and given the ultimate weapon, the power to destroy millions by just thinking about it.   Will they succumb to this temptation?
Valerie French (

Director David Bradley’s 1960 film release of 12 to the Moon has a international team of scientists locked in deadly conflict with an alien intelligence that has concluded that mankind is too puny to continue.

The H-Man is a 1958 (1959 domestic release) and Battle in Outer Space is from the following year (1960 domestic market) and are both Japanese imports from Toho Studios that were dubbed in English for theatrical release and proved to be surprisingly effective and well-received by the intended audience of the day. 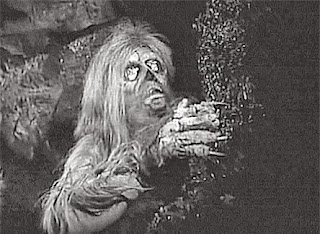 Lastly, writer/director Edward Bernds’ Valley of the Dragons was released theatrically in November of 1961 near the end of the “Jules Verne cycle” (From Earth to the Moon, 1958; Journey to the Center of the Earth, 1959; Master of the World, 1961; and Mysterious Island, also 1961) … it was the least commercial of the group, but nevertheless remains an interesting flight of fancy (dinosaurs on the moon? … who knew!).

For more information on these July 21 DVD priced-to-collect releases — and more — please be sure to visit Mill Creek Entertainment’s website at millcreekent.com.
Posted by DVD & Blu-ray Release Report at 8:00 PM