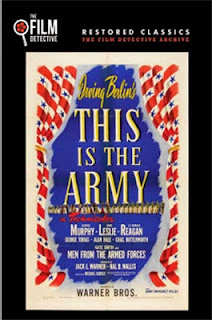 The Film Detective announced this past week that six additional film restorations have been added to its May 12 DVD release calendar … and all at the priced-to-own SRP of just $9.98.

Leading the way is the 1940 all-star film release of This is the Army, directed by Michael Curtiz and starring George Murphy, Joan Leslie, Kate Smith and future president, Ronald Reagan.

Continuing in the “entertainment-themed” realm we find The Fabulous Dorseys — director Alfred E. Green’s post-war biopic starring Tommy and Jimmy Dorsey as themselves, Springtime in the Rockies (1942) with Betty Grable, Carman Miranda, Cesar Romero, John Payne and Harry James and His Music-Makers and the all-black musical drama Duke is Tops (1938 with Lena Horne).

For Western fans it is John Wayne in the saddle in West of the Divide (1934, with Gabby Hayes and Yakima Canutt) and on the mystery front we have the legendary Boris Karloff starring as detective James Lee Wong in director William Nigh’s 1939 release of The Mystery of Mr. Wong. 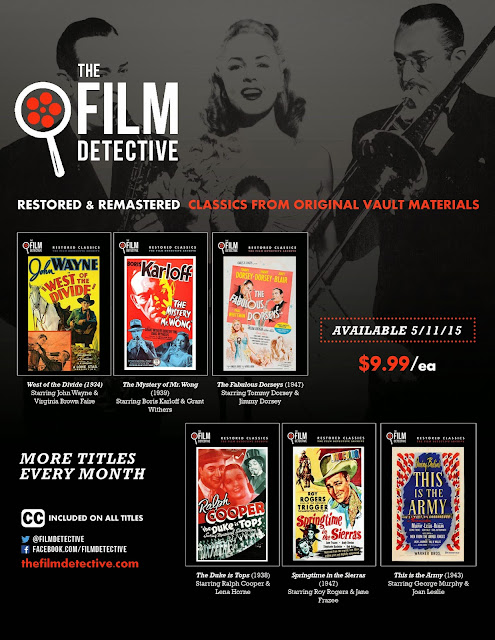 Email ThisBlogThis!Share to TwitterShare to FacebookShare to Pinterest
Labels: The DVD and Blu-ray Release Report, The Film Detective Adds Six Film Restorations To Its May 12 Release Calendar