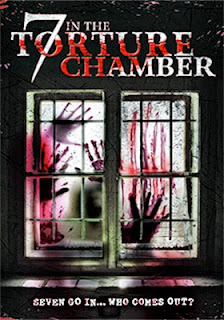 Indican Pictures has tabbed May 26 as the DVD release date for director Griff Furst’s serial killer blood fest, 7 in the Torture Chamber.

Poor Madison (Lina Esco — LOL, Heroes: Destiny), she thinks she’s planned the perfect escape from her parents and a potential stint in some hellish prison (aka: boarding school) for troubled teens.   The plan for her is to spend the summer at the Crystal Lake Treatment Center, where young women are given a second chance to get back on the right path, or as Madison puts it, “rock climbing with crazy chicks.”

Little does she realize she’s joined what is commonly referred to in the horror genre as a “victim’s pool” … you know, a group of friends, a selection of random strangers, or, in this case, other nubile young women like herself that will quickly become the victims of the local serial killer known simply as “The President” (he wears a presidential mask). 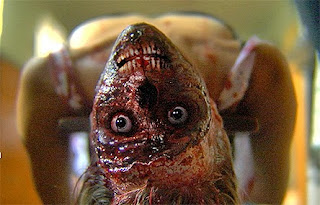 Madison’s fate is foreshadowed when “The President” comes calling on one of the town’s locals — a lovely little blonde — who is knocked unconscious, tied to the kitchen table and, skillfully — using just kitchen implements — he removes her face.

She settles in with the creepy “guards” (red herrings) and the other would-be victims (some sex-capades and other sexploitation frivolity) and soon enough the fun begins in earnest as “The President” comes knocking.   Who lives?  Who dies?   One thing is for certain … Crystal Lake is going to need some fresh victims for next summer!

Email ThisBlogThis!Share to TwitterShare to FacebookShare to Pinterest
Labels: Indican Pictures 7 In The Torture Chamber Ready For DVD On May 26, The DVD and Blu-ray Release Report