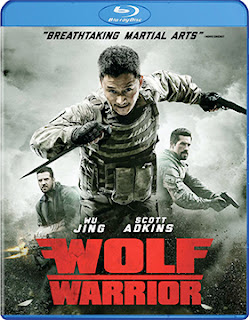 A generation ago, the film industry in China would have been incapable of making anything like Wolf Warrior.   Jackie Wu’s character (yes, he also stars), Sergeant Leng Feng, would have been a one-dimensional cardboard soldier — glorious to be sure — in the People’s Liberation Army.   His exploits would have been as difficult to watch as would have the predictability of the outcome of the a-to-b-to-c storyline.

Not so today.   Wolf Warrior is both slick — matching anything out of Hollywood in terms of production quality — and multi-faceted.   The film works as either a straight-up action thriller, and not surprisingly, also as a well-crafted propaganda piece that extols the glorious virtues of this modern Chinese warrior.

Sergeant Feng is a marksman every bit as skillful as U.S. Navy SEAL Chris Kyle, and in an extended opening sequence he displays his expertise with a near-impossible shot that was taken against explicit orders.

That bit of pique lands him in hot water with his superiors and subsequent confinement where he is to ponder his transgression.   This initial set up allows filmmaker Jackie Wu to showcase Feng’s shooting skills and a chance at redemption when he is offered an opportunity to do just that, redeem himself, by joining the elite Wolf Warriors.

Training and comradeship follow and it is during one of these mock exercises — ironically against his former unit — that a band of foreign mercenaries (lead by Scott Adkins) suddenly emerge from the woods with specific orders to assassinate Feng.   Circle back to the opening sequence, his target was the brother of a ruthless drug lord and these invading killers are his revenge!

Well Go USA’s release of Wolf Warrior is in Mandarin with English subtitles.
Posted by DVD & Blu-ray Release Report at 7:15 AM