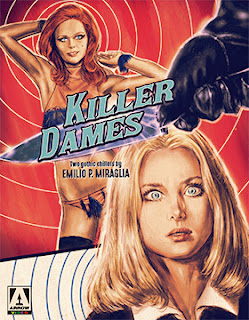 Arrow Video, with domestic sales and distribution expertise provided by MVD Entertainment Group, has a genre-fan double-bill ready on May 24 that will appeal to both the purists and the casual viewer alike.

Titled (and it is a mouthful) Killer Dames: Two Gothic Chillers by Emilio P. Miraglia, it contains newly prepared 2K restorations from the original camera negatives of Italian filmmaker Emilio P. Miraglia’s Giallo classics from the early 1970s.   The release SKU planned by Arrow is a double-disc Blu-ray/DVD Combo Pack.

For the purists, both of these Giallo films are presented with two viewing options … the original Italian language release, with English subtitles, and the domestic English-dubbed theatrical presentations. 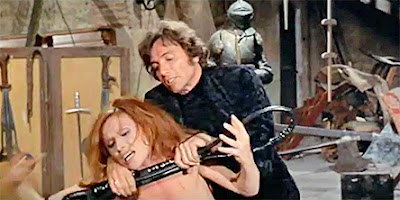 There are bonus goodies galore.   Beginning with The Night Evelyn Came Out of the Grave, we have a newly-prepared commentary option from Giallo expert and author Troy Howarth (“So Deadly, So Perverse: 50 Years of Italian Giallo Films”), an introduction by actress, Erika Blanc (as Susan) — who is also featured in two vintage interview sessions titled “The Whip and the Body” and “The Night Erika Came Out of the Grave” — and a archival interview with production designer Lorenzo Baraldi titled “Still Rising from the Grave.”