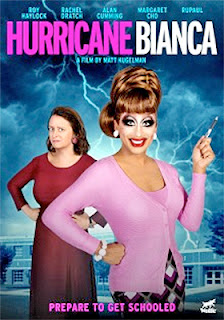 News arrived this past week that writer/director Matt Kugelman’s deliciously wicked comedy, Hurricane Bianca, will be making its DVD debut on Oct. 18 courtesy of Wolfe.

Richard Martinez (played by former award-winning costume designer-turned-comedian and drag queen Roy Haylock — as Bianca Del Rio on the RuPaul's Drag Race television series) wants nothing more than to be a high school science teacher and thinks that he’s about to fulfill that dream when he lands a job teaching in a small town in Texas.   He has just about as much time to write his name on the chalk board, “My name is Richared Mar …” when he’s outed and fired for being gay.

Well, you can’t have the talented Roy Haylock (he’s toured internationally with his Rolodex of Hate stand-up show and was the winner of the sixth season of RuPaul's Drag Race) being fired in the first few minutes … that makes for a very short film. 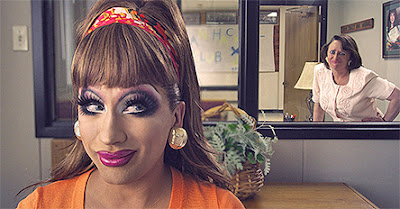 Richard doesn’t stick his tail between his legs and hit the highway, instead he reinvents himself as Bianca and applies for the new teaching vacancy.  From there on it is Bianca in full revenge mode … a force of nature, which allows filmmaker Matt Kugelman free range to let Haylock do what he does so very well and this is be the persona of insult drag queen, Bianca Del Rio!

Playing it straight as Principal Wayne is character actor Ted Ferguson and comedian and voice actress Rachel Dratch is Deborah, the school’s vice principal, who has to keep a straight face while Bianca hurls insult after insult at her (love to see the outtakes of those two together ... maybe in the blooper reel).

Bonus features include commentary from filmmaker Matt Kugelman and a blooper reel (got be some great bits there).