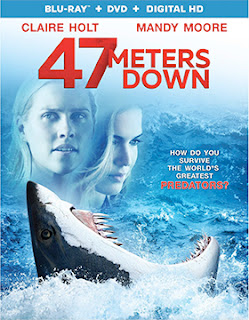 Last summer Blake Lively was stranded on a rock with a killer shark doing everything possible to make her a meal in director Jaume Collet-Serra’s masterful thriller, The Shallows.   Lively’s character was enjoying an afternoon of surfing — at an incredible beach — and things went south from there.

This year, we have Mandy Moore (A Walk to Remember) and Claire Holt (as Rebekah in The Vampire Diaries), who play sisters in writer/director Johannes Roberts’ 47 Meters Down (aka: In the Deep).   They get talked into an afternoon cage-diving excursion …  and they too see things go south.

The backstory, however, is every bit as good as the film itself.   It was destined to be a direct-to-video release last summer titled In the Deep, but with the success of The Shallows and filmmaker Johannes Roberts knowing what his final product was, the film was pulled at the last minute and switched to Byron Allen’s Entertainment Studios, Inc., which immediately put the home entertainment plans on hold and went back to the original title, 47 Meters Down, and then waited.

The film was release theatrically this year (June 16) and was an indie-smash, pulling in $43.1 million in domestic box office receipts (that’s a monster number for a non-studio distributed film).   That’s right, written off as direct-to-DVD release, 47 Meters Down pulls in over $40 million at the box office against major-studio competition.

On Sept. 26, Lionsgate Home Entertainment (technically an Anchor Bay release) will be shipping DVD and Blu-ray/DVD Combo Pack editions of THIS YEAR’s shark thriller, 47 Meters Down … the ARR comes in at 102 days.

We can’t report on any bonus features included with the home entertainment launch as Lionsgate Home Entertainment is mum’s the word on those details.