The street date will be Jan. 16 for the first group, which is top-lined by both DVD and Blu-ray editions of America's Treasures: A 12-Part National Monument Documentary Series (a double-disc collection featuring Digital Copy).   Over 25 historic locations are featured here in different chapter titles that range from “Fossil Worlds” and “Ancient Cemeteries” to “Symbols of Liberty,” “Road to Equality” and “The Incredible Pacific Coast.”

On the DVD release front from Mill Creek Entertainment on Jan. 16 look for a three-film tribute to the late Jerry Lewis that is titled Comedy Triple Feature.   Included in the collection are director Jerry Paris’ 1968 film adaptation of the Max Wilk novel, Don't Raise the Bridge, Lower the River, which teams Lewis with British comedian Terry-Thomas, with Jacqueline Pearce playing Jerry’s long-suffering wife.   From the summer of 1969 we have director George Marshall’s Hook, Line and Sinker, which co-stars Peter Lawford and Anne Francis and Jerry Lewis both stars in and directs 3 on a Couch, with Janet Leigh as his co-star. 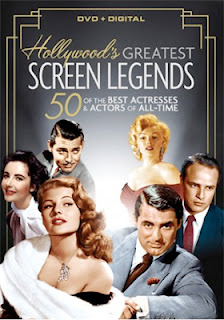 For fans of stars from the Golden Age of Hollywood, there’s the four-disc collection titled Hollywood's 50 Greatest Screen Legends, which features biography documentaries on the screen greats, ranging from Bette Davis, Marilyn Monroe, Elizabeth Taylor, Judy Garland and Mae West to Clark Gable, John Wayne, Gary Cooper, Gregory Peck and Humphrey Bogart.   50 in all, which makes this a must for movie fans of all ages!

For fans of Charles Starrett, who is perhaps better known as The Durango Kid, Mill Creek Entertainment has the double-disc, ten-film collection ready to own on Jan. 16 that is simply titled, The Durango Kid Collection.