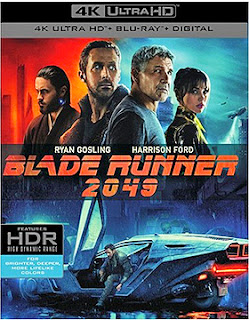 Warner Bros. Home Entertainment avoided the temptation of slamming director Andy Muschietti’s smash film adaption of Stephen King’s It and director Denis Villeneuve’s futuristic thriller, Blade Runner 2049, into the December home entertainment launch window.   With Dunkirk in place on Dec. 19, both of these hits could easily wait until Q1’18 for genre fans to savor.

It received a Jan. 9 street date and news arrived this past week that Blade Runner 2049, one of the most anticipated films of 2017, will follow on Jan. 16 as a four-SKU product launch.

The ARR works out to 102 days and the box office take currently stands at $90.8 million.

Planned for distribution are a stand-alone DVD edition, a pair of Blu-ray selections — a Blu-ray/DVD Combo Pack and a double-disc Blu-ray package featuring both 3D and 2D viewing options — and a 4K Ultra HD/Blu-ray Combo Pack.
The film is absolutely gorgeous, and, as with last year’s Passengers from director Morten Tyldum and screenwriter Jon Spaihts, Blade Runner 2049 plays out as a solid sci-fi thriller and as a much deeper look at what it is to be human.   It is also relentlessly depressing — even more depressing than the fate of Aurora and Jim as they live out their lives on the Avalon … never reaching their destination.

Ryan Gosling is “K,” a new Blade Runner, and Harrison Ford returns as the world-weary Deckard, who knows “stuff” that makes both him and K targets … hunted by both humans and androids.