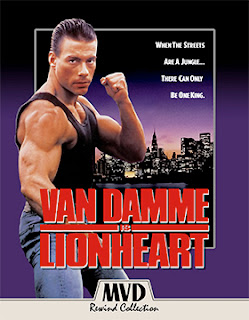 The equivalent of cockfighting, but substituting humans for the unlucky roosters, is what Cynthia Caldera (Deborah Rennard) — a wealthy New Yorker, with too much time on her hands — organizes for her upper crust friends.  It is into this combat circle that French Legionnaire Lyon Gaultier (Jean-Claude Van Damme) finds himself when he jumps ship in New York harbor — in a prologue we learn that his brother was a police informant who was outted by Los Angeles thugs and literally burned alive.   He is now in intensive care and Lyon is desperate to get out to the coast.

Scurrying through the streets of Manhattan he comes across a streetfight, complete with a crowd of wagering fanatics — big money is being bet on who can pound who into submission.   Short on cash, Lyon enters the competition and scores big!   He even gets a street-wise manager (and friend) in the process named Joshua (Harrison Page), who helps out in a very tight spot. 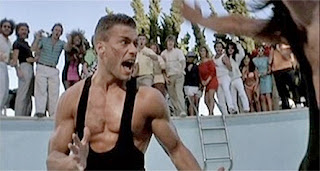 That little performance catches the attention of Cynthia and it is all-in for her, she’s got to have Lyon in her stable of fighters.   She even gives him a new fighting moniker, Lionheart!
Not interested, Lyon and his new buddy, Joshua, head out to Los Angeles, but soon discover that his brother is dead and his widow, Helene (Lisa Pelikan) and her daughter (played by Ashley Johnson in her film debut, who has gone on to have quite the career as a “voice talent,” plus such TV series as Growing Pains, All-American Girl, Blindspot, etc.) are destitute.

No sooner can he say, “I’ll help out,” when up pops Cynthia and her “assistant,” Russell (Brian Thompson) … she simply can’t take no for an answer.   If that wasn’t enough to put the pressure on, the arrival of two Legionnaire skip-tracers intent on taking Lyon back to Djibouti puts the icing on the cake. 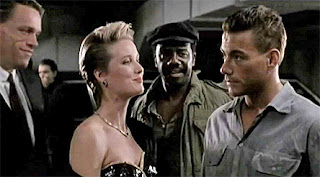 All of this is, of course, the set-up.   Cynthia has in mind a high-stakes “death match” for Lionheart against the unbeatable Attila (Abdel Qissi), a streetfighter who has killed no less than eight of his opponents.

As any fan of Jean-Claude Van Damme knows, Attila-smila, Lionheart is going to mop the floor with him.   So director Sheldon Lettich and Van Damme himself, needed to come up with a little something that would make the outcome in doubt.   So they wrote in an altercation with the two blokes from the Foreign Legion who were on Lyon’s tail that left him bruised and bloodied … and with a cracked rib!

Cynthia’s “death match” will be a real fight-to-the-finish and Lionheart might not survive Attila’s beatdown. 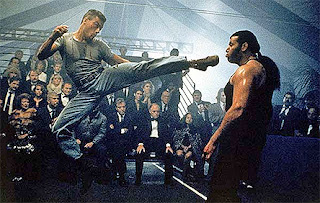 Bonus goodies in this all-action thriller include commentary from director Sheldon Lettich (Double Impact, Only the Strong … and screenplays for Max, Rambo III, Bloodsport, Russkies, etc.), who is joined by actor Harrison Page (Beyond the Valley of the Dolls, Carnosaur, etc. … and as Captain Trunk in the Sledge Hammer! sitcom), and two new video sessions, one with filmmaker Sheldon Lettich and the other featuring Harrison Page.

Plus, there is the newly-prepared documentary, The Story of Lionheart, two new production featurettes — “Inside Lionheart” and “Lionheart: Behind the Fights” — the vintage of “Making of Lionheart” featurette and a bonus featurette titled, “Behind the Scenes of the Audio Commentary.” 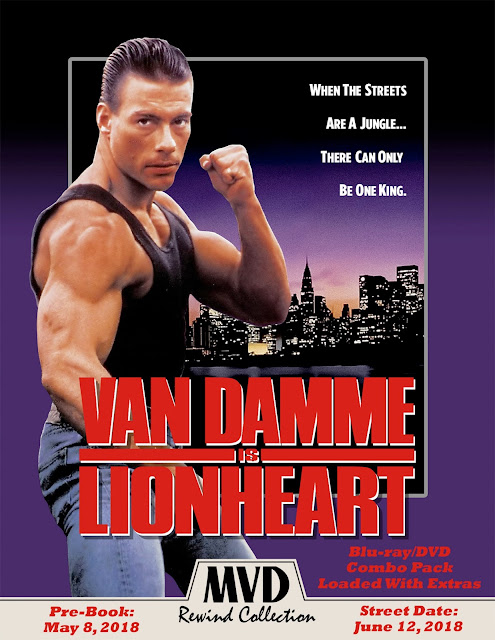