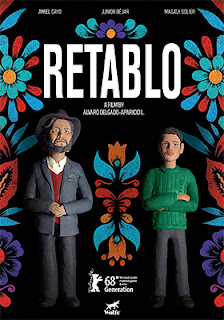 For a first-time filmmaker, especially from a country not known for its filmmaking output, Retablo is blessed with solid production values (cinematography by Mario Bassino, editing by Eric Williams and a music score by Harry Escott) and excellent performances from a cast of largely unknowns.

In the remote mountainous regions of Peru (filmed in and around Ayacucho — over 9,000 feet) we are introduced to Noé (Amiel Cayo), an artisan known for his “Retablos” — wooden picture boxes depicting family, religious or other important events.   His 14-year old son, Segundo (Junior Béjar Roca in his film debut) has been his apprentice and has developed the skills that will serve him well as he grows into an adult.

It is the job of the Retablo craftsman to witness events — a wedding for example — capture the essence of the story and then build a small, but elaborate “shadow box” (filmmaker Alvaro Delgado Aparicio’s description) that depicts a certain moment in time.   Noé and his son travel throughout the countryside (often difficult as result of the terrain) to obtain commissions for the Retablos that he will create and then deliver to his patrons.   He is renown for his work. 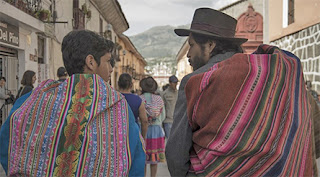 It is on one of these trips that Segundo witnesses something that tears his world apart.
Can he ever regain the awe and respect for his father?   And what of his footsteps?   A career tossed aside in disgust?

Once this family “secret” is out, Segundo’s mother, Anatolia (Magaly Solier — The Milk of Sorrow, Amador), is able to approach her son in a new light.   In a beautiful structure sequence, Anatolia lays it on the line to the sullen Segundo and explains to him that his father has devoted his entire life to the schooling of his son so that he will not be a peasant — a man without future — but a gifted craftsman; an artisan with standing.   You can see in Segundo’s face and body language the transition from anger to understanding … a magnificent moment captured on screen between a mother (who too has devoted her life as a wife and mother in ways that have been outside of a traditional relationship) and son. 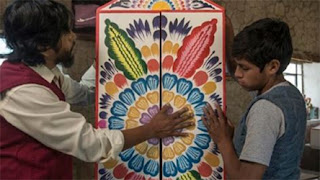 Filmmaker Álvaro Delgado-Aparicio uses the Retablo as a metaphor for the growth, understanding and final acceptance by the son.   A first glance of a Retablo shows the superficial trappings of an event, but upon deeper reflection, the subtle layers of the “shadow box” and its details are revealed.   So too is the events of life … even those events that come as a shock to the soul.

Retablo is presented in Spanish with English subtitles. 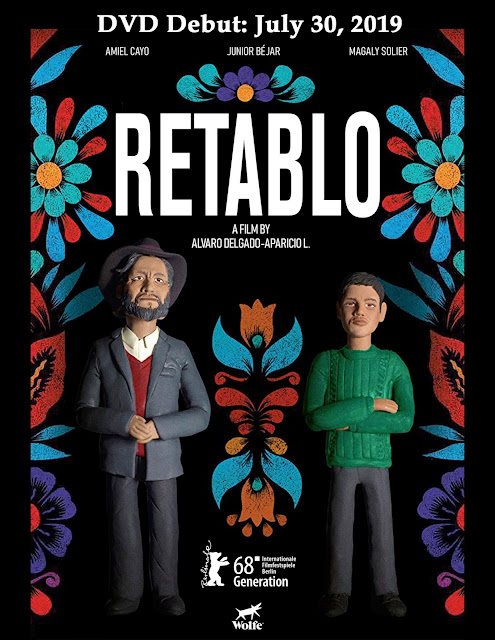