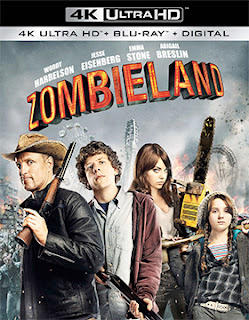 The Aug. 27 4K Ultra HD/Blu-ray Combo Pack release of Stand by Me (announced earlier) appears to be a one-off aberration as Zombieland, as with all of the other Sony Pictures 4K Ultra HD product offerings, includes Digital Copy.   Maybe it was some weird contractual thing with the distribution of Stand by Me that precluded this purchase perk.

As for bonus features, Zombieland includes the newly-prepared featurette titled “Raised From the Dead: Zombieland A Decade Later,” plus two additional featurettes, “Behind the Scenes with the Cast and Crew of Zombieland” and “Shootin' Zombies with Ruben Fleischer.”

The companion Blu-ray disc contains all of the previous bonus goodies from the 2010 Blu-ray edition, including commentary from director Ruben Fleischer, actors Jesse Eisenberg and Woody Harrelson and writers Rhett Reese and Paul Wernick.